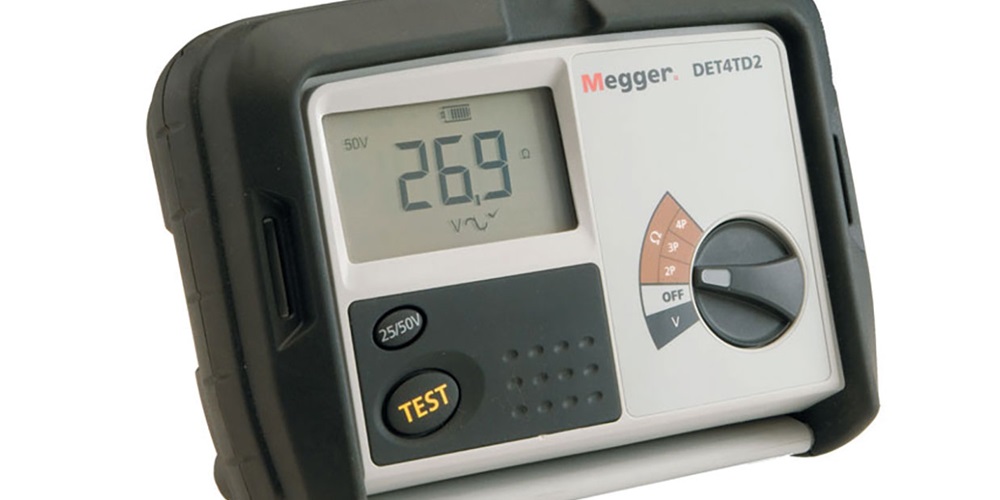 A building’s electrical system must be properly grounded to ensure it functions properly, to prevent damage to the system’s components, and, of course, to protect people from potentially deadly electrical shocks.

It is critical to test grounding during construction and routine maintenance to confirm it is functioning properly. While some multipurpose testers include ground test functions, manufacturers recommend using dedicated ground testing equipment. In the past, such equipment was large and cumbersome, but grounding testers have become more compact and easier to use.

Richard Wexler, director of marketing—instruments, Flir Systems, said grounding is a necessary and essential component of any electrical system.

“In commercial or residential settings, as well as in municipal infrastructure such as light poles, sidewalks and docks, proper grounding provides a measure of safety to users, both human and animal,” Wexler said. “It also ensures that electrical equipment and installations are not damaged due to electrical surges from lightning or deregulated surges from utilities. Grounding is also an essential part of ensuring short circuits aren’t hazardous, providing an easy path to ground.”

Dedicated grounding testers provide specialized measurements to identify issues with ineffective grounding, namely current, resistivity and potential. They often include two to four poles to provide a more accurate picture of earth conditions in a given area.

In new construction, setting new ground rods must be based on optimal soil conditions to ensure grounds work as best as they can. Similarly, during upgrade work, new structures, circuits and other changes or additions can impact the location of existing grounds as well. During upgrades, it’s important to test existing/remaining grounds to ensure they have not diminished in function due to corrosion, poor contacts, etc.

“Grounding tests on installed grounds should be an essential part of any preventive maintenance schedule,” Wexler said. “Deterioration from exposure to water, humidity or corrosive elements in the air, can cause corrosion. Vibration can loosen connections. Clamp-on ground resistance testers can quickly measure resistance and current leakage that might be occurring. More advanced testers can also measure ground resistivity in case soil conditions have changed over time.”

Jeffrey R. Jowett, senior applications engineer, Megger, Dallas, said multifunction testers can be used for some grounding tests, but he questions their use.

“In combining separate or non-compatible technologies into a single package, there’s the risk of some important function or feature being given a short cut that reduces its quality,” he said. “Dedicated ground testers offer the best possible combination of features and performance without having to cut back in order to accommodate some completely disparate function.”

Jowett said three-terminal testers do ground resistance and bonding and can be used in all situations for these tests. Four-terminal testers add soil resistivity measurement and are a must to perform that test. Clamp-ons are a bit more limited but can still be used for ground resistance and bonding in electrically compliant applications; that is to say, the electrode to be tested must be bonded to the utility or some other current return path and cannot have more than one connection to the electrical system.

“A clamp-on cannot be used during construction because there is no return path for the induced test current,” Jowett said. “It is a good idea to use a three- or four-terminal tester if large ground fields are being constructed and test periodically throughout the construction process, as is done in the wind industry.”

Grounding tests haven’t changed much, but there have been significant improvements in testers.

“Better noise protection is always valuable,” he said. “So are improvements in data recording and downloading. Procedures that involve math can be automatically calculated, error-free. This, plus autographing of results, makes production of reports quick and flawless. GPS location of test probes and remote control of tests greatly enhances the efficiency of testing by reducing the time consumed in walking back and forth. Graphical display of results such as FOP graphing can save enormous time by permitting the operator to make critical decisions on site rather than back in the office.”

“If lightning was to strike or the power was to surge for whatever reason, it could produce dangerously high voltages of electricity in the system,” he said. “If an electrical system is grounded, all the excess electricity will go into earth, rather than frying everything connected to the system.”

Fernandes said multipurpose testers could be used for grounding tests if they have the necessary features to capture needed readings, but this may cause confusion with some workers who may not understand how the meter is obtaining readings, which could result in misinterpretation.

“Keeping it simple is best by using ground testing meters,” he said. “There are handheld ground testers with interlocking jaws and three-pole and four-pole testers used in new construction or for preventive maintenance. A three-pole tester can determine what soil resistance is, which should be 10 ohms or less. Also, public and commercial pools, hot tubs and spas must be certified every five years.”

Because ground rods deteriorate over time, preventive maintenance is a must, Fernandes said. Tests check for good grounding and soil resistivity.

“What has taken place in the last two years are features and functions like built in formulas to do calculations that heretofore were done by hand,” he said. “They include adding selectable frequencies to use while conducting tests to improve noise immunity and minimize the effects of downstream resistances when testing energized systems. Built-in voltage detection is available on several instruments as a safety feature.”

Test current: Many testers only test at a few milliamperes. It is sufficient for small grounding systems but inadequate for larger systems or systems with poor soil resistivity. For testing larger systems, look for a tester capable of testing with up to 100 milliamperes or more.

Error indicators: Consider a ground resistance tester that can indicate noise, measure stray voltage and leakage current and has high-resistance test electrode connections that will alert the user to inaccurate readings.

“Look for a tester that can easily connect to test stakes driven at long distances from the grounding rod and just as easily can retrieve and store the 50 meter cables,” Patel said. “One of the major trends is the capture and transmission of test results directly from the tester to the cloud. By combining test results in near-real time with historical data trends, issues can be identified before the equipment fails. Also, being able to geotag equipment under test is especially useful when making multiple measurements in a large building or rural areas, as well as outdoor equipment such as aerials, masts and pylons. The instrument itself does not have a GPS facility, but rather communicates via Bluetooth to connect to a mobile device that does.”

“Performing ground tests on a regular basis and analyzing results over time can provide an early warning system for problems before they become major issues,” Patel said. “For routine maintenance, two key tester features should be considered: stakeless testing for conducting tests on equipment indoors that is still running, and data transmission to the central office, often via the cloud, which can be used to trend readings and identify a deteriorating condition.”