From Your Own Living Room 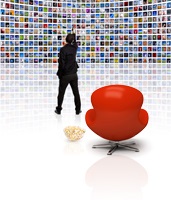 While the connected home market is clearly expanding, the details are uncertain, and the players are jockeying for position. Hardware and software manufacturers are trying to be the first to be online because they know this market is going to take off. Electrical contractors would be wise to learn about these new offerings. Knowledge of what’s available and of the benefits of connected devices will go a long way toward selling builders and homeowners on the idea of adding necessary low-voltage support-wiring to homes.

Smart TV
The Samsung 7000 series 3D HDTVs come with a built-in Ethernet port for direct Internet connection, which will include InfoLink RSS service, provided by USA Today. Press the RSS button on the remote control to bring up a menu of selectable news feeds covering a variety of customizable topics. You can then browse headlines or select a full story to read. In addition to news, there is up-to-the-minute information about weather, sports and stocks. The weather section allows viewers to personalize location by ZIP code for current temperatures and seven-day forecasts. Market data will offer summaries and individual stock quotes. While all of this information is being displayed, the TV content remains on-screen.

Intel Corp. is manufacturing a “smart TV” processor and putting its weight behind the idea of Internet-connected TV. It has partnered with Google TV, a service that is being built into Sony Internet TVs. This trio is pushing the idea of smart TV as a means of accessing any content on the Internet.

Audio
Multiroom audio systems can be set up to mix and match different audio sources and listening zones, with separate controls in each zone.

The Home Automation Inc. (www.homeauto.com) Hi-Fi 2 system can interface with up to eight audio sources in as many zones; it can be upgraded to 16. Each zone can be controlled from wall-mounted devices that enable the user to select and control music sources for that zone—all of this over a Category 5 network.

The Russound (www.russound.com) C-series system also connects to eight zones and has an RS-232 port for tying into a home local area network (LAN).

CasaTunes sells software and hardware to network a home-owner’s music sources and control as many as 12 zones.

Standards
As I have said before, for a new technology to become the norm, standards must exist. Prompted by Sony in 2003, the Digital Living Network Alliance (DLNA) was founded to develop open standards for the connected home. It publishes the standards and certifies device manufacturers who agree to accept them. In return, the manufacturers get to advertise that their equipment is DLNA-compliant. In May 2010, the DLNA began work on software certification to ensure a common language will be used for devices to communicate with each other. According to a DLNA white paper, which can be downloaded from the organization’s website: “The concept of flexible access is key to understanding how consumers will adopt content--sharing technology […] DLNA’s vision of the home network builds up as consumers bring in new receivers, speakers, monitors and players. Any two pieces of equipment can make up a network.”

This is a valuable selling point for an installer. As long as the wired infrastructure is in place, the network can be built over time. Electrical contractors could do a lot of business installing networked home theaters, lighting, security and temperature controls. Understanding DLNA standards would give them a leg up not only in installing wiring and equipment but also in being able to suggest which equipment to buy.

EC as cabling salesman
Residential networks, coupled with audio and video, are great attention-grabbers. The prospect of being able to use a large HDTV TV to do Internet browsing, to connect to a PC and to wire up a home with audio in every room captures the imaginations of homeowners and homebuilders. Then, if you add in the other advantages of a home network, such as saving energy costs, you seriously improve your chances of selling the idea of a structured--cabling system.

BROWN is an electrical engineer, technical writer and editor. For many years, he designed high-power electronics systems for industry, research laboratories and government. Reach him at [email protected] or at www.writingengineer.com, an independent professional writing service.