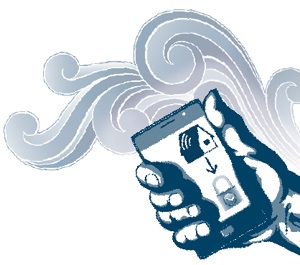 Once only a luxury item for the wealthy, home automation technology that integrates a house’s electrical and low-voltage devices is becoming more commonplace in U.S. residences. Previously, its adoption was sluggish because of the installation complexity and high cost. For years, competition among technology vendors, multiple incompatible standards and the resulting expense limited the penetration of automation technology to homes of the wealthy or ambitious hobbyists.

However, the falling cost of home controls hardware, the public’s growing understanding and acceptance of digital technology, and the introduction of some new big players, such as Internet service providers (ISPs), suggest the home automation industry may soon break into the mainstream. More middle-class, single-family dwellings are undergoing retrofits, and more electrical contractors are providing these systems at a profit.

Analyst Bill Ablondi, director of home systems research at Parks Associates, a market research and consulting firm focused on residential product and service segments, indicated that smart home controls installations totaled around $3.5 billion in 2007, a number that is expected to grow to $6 billion in 2012. That figure, however, was projected before the economic recession. New figures from a Custom Electronic Design & Installation Association (CEDIA) Benchmarking Survey are expected to be released later this month and may reflect more conservative growth. In addition, a CEDIA member survey reported that systems integration and control was the most profitable product category for 2010. In part, the entertainment appeal of the technology is drawing in new users.

Game changers—smart phones and tablet computers
When it comes to public perception, smart homes don’t seem quite as futuristic to an audience of consumers who carry around smart phones and tablet computers. As these users become more accustomed to demanding digital responses to their problems and to using touchscreens to access data and request services, the idea of tying in such functions with a home and a controller is increasingly palatable, said Eric Smith, co-founder and chief technology officer at Control4 Systems, Salt Lake City. Control4 makes technology that manages lighting, security cameras and audio/video that is accessible for many people, not just the well-to-do.

Typically, home automation systems enable users to control all aspects of home entertainment, lighting, security and energy use through touchscreen technology. That can include using an iPhone or iPad app to manage these systems in the home. Smith said he can use the technology in his own home to select music from an Internet site to play on his stereo, or he can choose an Internet-downloadable movie to view on his BluRay player without ever going to his computer. The technology gives a smart home the ability to shuffle digital media all over the house with the touch of a finger.

The ubiquity of touchscreens creates a public willing to consider them.

Such technology also is gaining traction in the assisted-living industry, where homes of the disabled can be equipped with automation that provide the services residents would previously have required from family or nursing staff, including turning lights on and off as needed and other remote-controlled or sensor-managed functions. Some use speech-recognition technology or occupancy sensors to indicate adjustments to home lighting, heating or other services.

New players
Recently, utility companies have begun deploying energy management devices in homes, and it is another gateway for home automation systems. For example, if a homeowner already uses a touchscreen to show how much energy they are using at any given time, the home automation systems can be tied into such a service.

“Energy management is being seen as a key feature of nearly all home automation systems,” said Pete Gray, director of residential strategy, Schneider Electric, Palatine, Ill., who added that many systems are providing access to thermostat set-points. “[However,] the best systems are providing real-time, demand-response capability [such as] when utility rates rise.”

In this case, the home automation system would interpret information and make decisions for homeowners that would reduce consumption and save money during peak-pricing periods.

In the near future, Smith said, automation will allow homes to recognize who has entered based on the mobile phone or other devices they carry, and adjust settings—such as turning on a light or raising the thermostat—accordingly.

According to Ablondi, the home monitoring and control industry can expect to see further gains from some other entrants into the field—ISPs. ISPs, such as Comcast and Verizon, are already looking into systems with features, such as activity monitoring and knowing when an individual walked through a door, and sending that data to interested parties. For example, it could alert a parent at work when a child has come home from school.

Comcast was the first, launching its Xfinity home security product in Houston last year. It includes an in-home touchscreen and mobile access from smart phones and a web portal to allow monitoring of home-related data over the Internet. It provides four window or door sensors, a motion detector and security panel as well as keychain remote.

Verizon’s FiOS home automation solution enables consumers to get information on energy use and set up modes, such as “home,” “away” or “night” through Verizon’s portal. The system is being tested in New Jersey.

In addition, vendors are looking at more integration opportunities. For instance, Ingersoll Rand is building a lock system that can notify other home-control systems to turn on a light when a door is unlocked. Schlage, Stanley, and Black and Decker are also working in this area.

Know your worth
So, as prices fall, more retrofit installations take place, opening up the middle-class market. Electrical contractors are doing the bulk of the retrofits. Contractors who do residential work need to align themselves to offer these kinds of systems if they aren’t doing so already, and they need to how to price systems correctly.

Those paying for an integrated system that includes security, lighting, energy management and home entertainment should be expected to pay a reasonable price for the installation work, and that’s where electrical contractors need to consider how they bid the jobs.

According to Smith, the greatest problem for electrical contractors is they don’t always charge what they are worth.

“Electricians have become great installers, so they shouldn’t be afraid to ask for a 40- or 50-point margin,” he said, adding that some of them are used to bidding at a flat rate, which simply isn’t what their work is worth.

A knowledgeable contractor also understands how systems can be used together and should be able to speak with customers about their options.

Keeping up with change
Since home automation technology is often merged with the electrical infrastructure in residential settings and is becoming more standardized, the role of the electrical or low-voltage contractor is evolving and requires new skills.

“A contractor who intends to install and service these systems will need strong knowledge of the communications infrastructure that serves as the foundation for these systems,” Gray said. “An understanding of wireless networks, computer widgets and Internet functionality will be essential to install, commission and service these types of systems in the future.”

“Have someone on staff who understands networks,” Smith said, noting that he found many contractors still have a lack of experience in the networking capabilities needed for a home control installation.
“Contractors need to understand who they might partner with and be prepared to offer products or services they haven’t before,” Ablondi said.

That can include cameras, lighting controls and energy management.

“As we have new firms coming in with marketing clout, that has to be respected and adjusted for,” Ablondi said.

Today, most installations are retrofits, he said. The CEDIA study will describe the numbers of those homes using such systems.