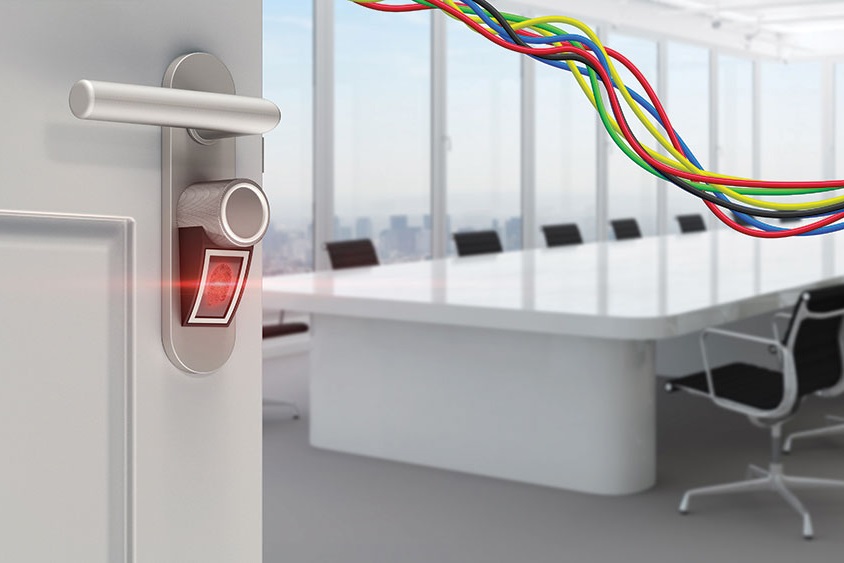 Power over ethernet (PoE) is a critical technology for integrated, IP-connected devices. Development and innovation in PoE continues to increase its capabilities, resulting in new standards, devices and methods to manage the technology for greater efficiency.

PoE uses an existing local area network to transmit power and data, eliminating the need for additional power supplies or electrical wiring. In effect, it deepens the capabilities of ethernet signaling by providing low-voltage direct current (DC) power delivery to network devices over the same wires that carry data.

PoE is used frequently in edge intelligent devices; for example, a smart access control reader that can make permission and access decisions at that door, rather than at a control panel in another location. With PoE, security contractors have more flexibility and labor savings in their installations and can power an end-device, such as a reader, surveillance camera or other devices, without having to juggle the logistics and costs of running separate cabling for power.

The Institute of Electrical and Electronics Engineers (IEEE) has three PoE standards (the latest is undergoing finalization). The IEEE 802.3af PoE standard was designed for equipment manufacturers to produce and leverage standards-based products that optimize the technology. Under this standard, 15.4 watts (W) were available for each powered device, which at the time was adequate for the majority of applications. The proliferation of additional power-hungry devices riding on the network, such as pan-tilt-zoom (PTZ) cameras and surveillance units with heaters and blowers, prompted the standard with higher power limits.

IEEE 802.3at, also referred to as PoE Plus or PoE+, provides enhanced power delivery up to 30W for products such as motorized PTZ network cameras, electromagnetic door strikes, proximity sensors, intercoms and other physical security hardware.

However, going beyond PoE Plus, due to the burgeoning number of ethernet-connected devices demanding even more power, a new IEEE 802.3bt standard is being finalized and is due for release. Also referred to as “High-PoE” or “PoE++,” it allows even higher powered devices to be supported and can deliver up to 60W over the same infrastructure, with the specification designed to be able to handle up to 100W.

An example of one product that requires higher power is CCTV camera illuminators, and the new standard will also apply more wholly to access control systems.

There is steep demand for more peripheral products to be PoE-powered, because of the efficiencies and overall savings inherent in its deployment.

“It’s all driven by cost,” said Frank “Skip” Haight, vice president of marketing, ComNet, Danbury, Conn. “If you no longer have to run separate power to a remote location, that represents the ability to save large amounts of money. Having IP cameras, PTZ [cameras] and heaters, access control panels, VoIP phones, wireless access points and much more served by one cable is a huge time and money saver. It also provides for better reliability as systems powered from the head end are easier to provide battery backup in the case of power outages.”

While manufacturers have been offering products that provide greater power for some time, Haight said the latest updated standards set parameters so companies can produce products that operate under universally accepted guidelines.

“Many times, even though in theory everything should work together, it just didn’t because of unique methods each manufacturer designed to,” he said. “Establishing the IEEE 802.3bt standard essentially will now ensure the latest 60 and 95W PoE devices will operate with a universally accepted standard that all manufacturers should adhere to, and be a major benefit for users and cause less challenges for integrators.”

Haight said the new standard increases PoE power by using all four pairs of the wires.

“The new delivered power levels should also increase efficiency, as the power lost from resistance should decrease,” he said. “The IEEE standard ensures the goal of PoE delivery is to match the distance limitation set by the data, that being 100 [meters].”

The one area that requires additional consideration is the supply for that PoE power. As the total number of watts available increases, so should the size of the power supply.

“If you have a switch with 12 PoE ports supplying 90W, that will call for a power supply with a considerable amount of capacity to keep everything running as designed,” he said. “Also, safety will always be a concern. Underwriters Laboratories [UL] has limitations on power and voltages that can be applied over Category 5 and 6 cable.”

The proliferation of wireless devices is also having an effect on the use of PoE, according to Steven Olen, product line manager, D-Link Systems, Fountain Valley, Calif.

“As wireless access points evolve to support faster speeds and more features, they will need more power and more bandwidth to feed them,” he said. “And, managed switches are also becoming smarter.”

As with other network-connected devices, new ways to remotely manage the solution are emerging. Power management is available in some products at each PoE port.

“It’s now possible to set parameters on power usage at each port,” Haight said. “You can set maximum and minimum power outputs, turn the power off or on at each port, or cycle the power to restart an IP device if it needs attention. You can also set it up to send an alarm if a device is using too much or too little power, alerting management of a problem with an IP device on the network.”

D-Link recently added a surveillance mode to many of its PoE switches, which is an optional management interface that provides the user with, among other things, additional ability to control and monitor PoE devices.

“They support a variety of features like time-based PoE, which uses automated scheduling to enable and disable the PoE power on a per-port basis,” he said.

With the internet of things, more data is going to be transported and connected. Those greater volumes mean more bandwidth is necessary.

“Until now, PoE switches were limited to 1 [gigabit per second],” Olen said. “In the future, D-Link-managed PoE switches will not only support more power with 802.3bt but also more bandwidth: 2.5GBASE-T, 5GBASE-T and 10GBASE-T. We can expect additional applications to take advantage of the benefits of PoE. We will see more PoE-powered lighting, point-of-sales devices, printers, video monitors and building automation.”