Phones and Apps: Taking Programming out of Smart-Home Installations 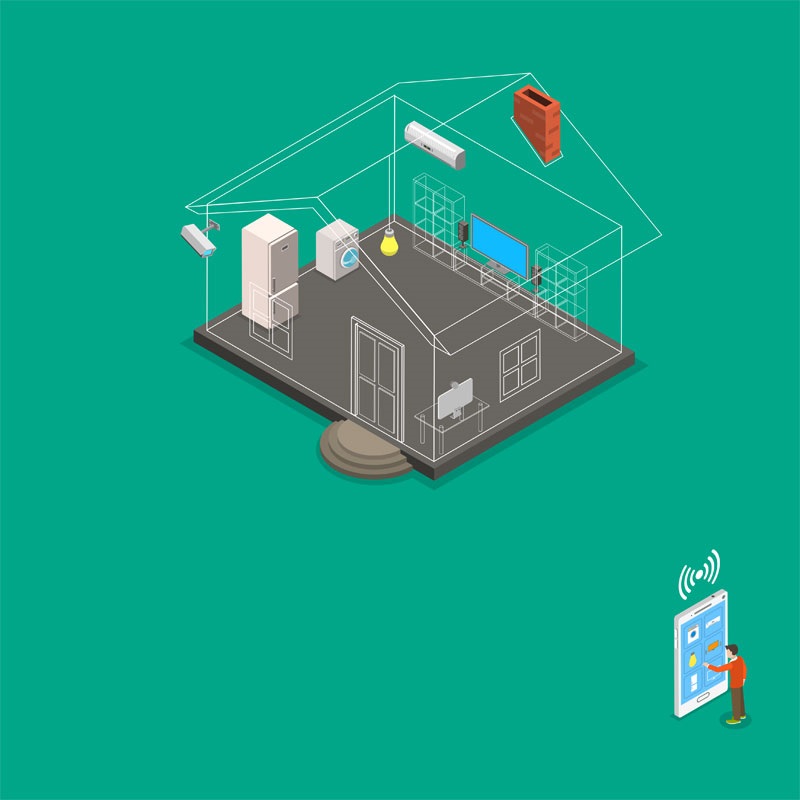 Cloud-based servers, the Internet of Things (IoT), the proliferation of smartphones with smart-home apps—along with hubs and services from companies such as Amazon, Apple and Google—are changing the market at a head-spinning rate. Electrical contractors may have been leery of the integration work and programming, but now they have access to a fast-growing market.

The simplicity and ubiquity of home automation means opportunity for ECs. For one thing, today’s systems come ready to install, and contractors can learn installations in a matter of hours rather than weeks. For many ECs, it has been a welcome transition.

Today’s systems, with built-in processing power, can free up ECs to provide their electrical expertise.

“Home automation has been around for a while now, but the average electrical contractor didn’t latch onto it because of the complexity,” Leonard said.

For Lutron Electronics, Coopersburg, Pa., the focus is on simplicity, affordability and reliability, according to David Weinstein, vice president, residential sales. The company promotes its products as easy to install and lifestyle-enhancing, and, in some cases, they can be deployed by simply changing out a light switch.

Home automation has survived its early growing pains, and the ease of installation and use are making the technology grow quickly in the residential market, Weinstein said.

“This isn’t the pet rock,” he said. “If you’re not thinking about installing smart-home technology, you’re falling behind.”

App-based technology enables those who have stayed out of the smart-home movement to acquaint themselves with it, with little demand on their resources for training and equipment. Cloud-hosted technology removes the integration piece of an installation.

There are various ways to control home appliances today. These include IoT-based home automation through the cloud; Wi-Fi through Android, iOS or Windows apps from a smartphone or tablet; Arduino- and RF-based methods; Android application-based remote control; and touchscreen-based home automation.

In most cases, the load can be controlled and monitored with an app and access to a server. The user can send commands from the phone, and these commands are fed to a Wi-Fi module. The Wi-Fi hub is configured to access the internet using any nearby wireless modem.

Amazon has gotten into the hub business with its Echo and Echo Dot. Wink hub and Samsung SmartThings hub are two other options.

“Now contractors can start dipping their toes in [without much investment],” Rhoades said.

ECs can simply install the devices and the hub to communicate with the server, and turn system setup over to the homeowner. Or, they can provide “white-glove service” for customers who want a tailored system set up for their needs. Benefits of the white-glove service are additional revenue at the time of installation and potential for more service calls as homeowners upgrade or change the way their service works once they have spent some time with it.

ECs can easily learn how to install and set up a system the way a homeowner wants it. The opportunity is not just in the initial installations. Weinstein said that 40 percent of people who buy home automation upgrade their system within 30 days. That means another potential visit for the EC to help ensure the user has the features in place they want for their home.

Soon, the hub device may no longer be necessary at all, simplifying installation even further, Leonard said. The Leviton products bundles soon will not need a hub because the devices will speak directly to the server through the Wi-Fi router already in the home.

Leviton conducted market research to determine the technology of greatest importance to homeowners and found that Wi-Fi for their devices was the thing they could least spare.

Everyone is glued to their phones, Leonard said, and he recognized the fascination with linking home automation to phones once he got the technology in his own hands. He was able to adjust a light at home using the internet service while on a flight—until his wife texted him to stop.

Weinstein predicts a significant wave of installations is on the way. Savvy ECs can upsell by helping homeowners and developers understand what is available; if they have some level of automation, upgrades are available.

“They should network with builders and developers to provide connected home experiences,” Weinstein said.

He also said ECs should acquire home automation systems for themselves to simply understand the benefits it provides. They don’t have to cost a lot, and the benefits may surprise those who haven’t used them before.

For instance, LILIN offers IP video doorbells. When a visitor presses the call button, homeowners use an app on their mobile device to have a two-way conversation and unlock the door even when miles away from home.

When it comes to cybersecurity, LILIN provides a peer-to-peer secure connection when used with a LILIN network video recorder (NVR). This allows the installer to leave the ports closed on the end-user’s router, which helps keep unwanted traffic from entering the network.

The emergence of analog HD (AHD) cameras is another trend.

“A perfect example of that is our development of an NVR solution that will work with Amazon Alexa voice recognition for live view and playback of recorded video,” King said.

For companies willing to work together, collaboration will result in the convergence of interchangeable devices based on industry standards that reduce the time, complexity and cost of home automation while greatly improving system reliability.

“[ECs should] pick suppliers carefully,” Cook said. “Installers need to find manufacturers that will answer the phone and help when they get involved in systems troubleshooting. Look for manufacturers who collaborate towards a common solution. It’s important to understand that not all technology plays well with others, especially in home automation.”