The Macrocosm Of Microgrids 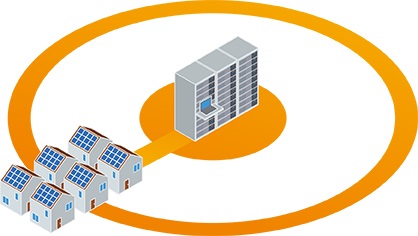 TechRepublic.com reported in October 2014 that the United States has more electrical grid blackouts than any other developed nation and that, according to the U.S. Department of Energy (DOE), demand for electricity has outpaced transmission rates by 25 percent every year since 1982.

Although the DOE promotes its master “smart grid” plan, microgrids are emerging as popular solutions as solar and other clean-energy generation become increasingly accepted. Navigant Research expects microgrids, which enable communities, institutions or people to decentralize power from utility providers, to become a $20 billion market by 2020.

Microgrids are defined by their function, not their size. Most microgrids, according to the Microgrid Institute, St. Paul, Minn., can be further described by one of four categories:

“A microgrid is a group of interconnected loads and distributed-energy resources within clearly defined electrical boundaries that acts as a single controllable entity with respect to the grid,” said Ross Guttromson, manager of the electrical power system research department at Sandia National Laboratories, Albuquerque, N.M.

Microgrids work like the main grid but are more reliable because electricity is generated close to the load. They combine local energy assets, resources and technologies into a system designed to satisfy the host’s requirements, which can include factors as basic as electrification and as complex as integrating variable distributed-energy resources (DERs) in a balanced net-zero system. Microgrids can be fueled any way the user wants.

“Instead of dictating a particular fuel source, the concept is that microgrids can use any single or combination of traditional, renewable, hydro or combined heat and power sources, with or without fuel cells,” Guttromson said.

Navigant Research indicates that hybrid microgrids, which involve a combination of solar, wind, utility grid, diesel generators and energy-storage technology, will grow by $5.5 billion annually until 2023.

One market force driving microgrid use is the need for enhanced reliability. Other key drivers, according to the Microgrid Institute, include the need for electrification in remote locations; grid security and survivability concerns; grid optimization; demand for lower cost energy supplies; and environmental, efficiency and renewable-energy benefits.

There are many challenges to microgrid deployment. Microgrid efficiency in small-scale generation applications is costly. In addition, it can be difficult to determine which options for operating the microgrid are the most efficient and optimal.

Interconnection is another issue. According to the Microgrid Institute, most utilities in connected areas don’t want microgrids connected to them because they can take away business or cause instability in aging grids.

In addition, the lack of standards development in the industry for equipment and parts makes lowering installation costs difficult.

Installing a microgrid, according to Michael Burr, director of the Microgrid Institute, requires electrical contractors that are licensed and experienced with internal building control and electric utility systems.

“A microgrid is an advanced automation and control system, so the most specialized skills involve installation, testing and maintenance of both electrical and communications networks, in addition to the integration of related systems,” he said.

Although the global microgrid market is small, it is growing quickly, and electrical contractors need to be prepared. Burr predicts that, in the next two to five years, microgrids will likely become more common, although the market segment probably won’t achieve significant scale until the 2020s, or even 2030.

“At that time, it seems likely that microgrids will become fairly common in one form or another, especially in areas such as hurricane zones, industrial sites and remote communities and islands around the world,” he said.

Because of the reliability they offer, and the desire to decentralize power and use more renewable resources, the interest in microgrids will continue to grow.

“As the industry develops installation and maintenance guidance and standards, the electrical contractor will be in the best position to ride the wave of microgrid deployment,” Guttromson said.