Get Into the Groove: Underground Fiber Optic Installations 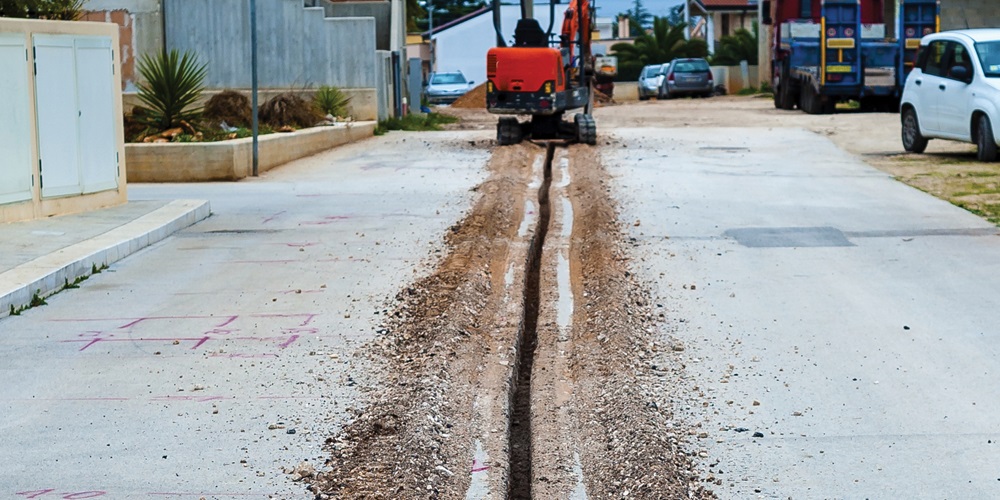 Last month, I wrote about a new class of fiber optic cables called microcables, which, as the name implies, are much smaller than regular fiber optic cables. They fit into much smaller ducts and even allow a unique installation method: blowing. “Blown” cables are not really blown but are floated on air and pushed into the duct; however, the name seems properly descriptive.

Traditionally, fiber optic cables are installed underground or aerially. A few get laid underwater—mostly over long distances, such as between continents-— but that’s very specialized, and I doubt any traditional fiber installers have been involved in this process.

Underground cables are generally buried by trenching and burying conduit. Then the fiber optic cable is pulled into the conduit. If conduit is not used, armored cable is needed to prevent crushing or penetration by rodents. If the cable is being buried in dirt that is soft, deep and does not have a lot of rocks or other buried infrastructure, armored cable can sometimes be direct buried by plowing it into the ground with a giant plow. However, that is fairly rare.

Trenching is a problem in cities and the suburbs. It requires digging up roads or alongside them, and it’s a slow process because there are many other cables and pipes to avoid. It also creates a traffic problem and, of course, a mess when finished because the road surface and often driveways, sidewalks and parking lots are poorly repaired. Did I mention it’s expensive? Very.

At least cities are learning that, if they allow a contractor to dig up streets to install cable, they follow the “Dig Once” philosophy. If you have to dig up the road or roadside, you install additional conduits—as many as practical-—so the next cable installed does not require construction; just pulling a cable into conduit. This concept also applies to any city construction. Even if you are installing other utilities, add some fiber ducts to the trench before you fill it, and keep records. It’s cheap insurance against digging again. When the need arises, you can pull cable without construction.

Projects such as fiber to the home (FTTH) or connecting small cells (cellular antennas that are installed every few blocks on utility poles, street lights or traffic signals) need a lot of fiber along virtually every street. Construction costs are one of the biggest line items in a FTTH or small-cell project and digging up streets slows the project down. As FTTH providers have found, homeowners resent long-term disruptions in their neighborhoods.

One alternative is aerial cable, but that’s not a great solution either. It’s not so disruptive to install, but it’s ugly, and it usually requires making room on the pole for new cables. That is expensive and time consuming, especially if you are a competitor to the owner of the pole. In areas subject to extreme weather, aerial cables can be damaged by wind or ice—or vehicles crashing into them.

Microtrenching is an alternative being used in some areas. It’s not new; I have been hearing about it for some five years now, starting in dense urban areas. Instead of digging a trench for the cable, you saw a groove in the pavement of the street less than 1 inch wide and about 8 inches deep. Most of the same manufacturers that make trenching equipment make microtrenching gear. The tools vacuum up the dust from the sawing, which can be used to mix with adhesive to backfill the groove after installing cable.

Microtrenching began with regular fiber optic cable that was dropped in the groove and filled. But this technique is  perfectly designed for microcables and microducts too. Instead of regular cable, place a multiple microduct assembly into the groove, and fill it up. When you are ready, blow a microcable into the duct. And, like the “Dig Once” idea, install multiple microducts for future expansion.

One project I’ve been discussing involves installing a six-duct assembly into the groove and initially blowing in one 288-fiber microcable. If needed, the single construction can be expanded to six 288-fiber microcables—1,728 fibers total in a 1-inch groove.

As you can guess, microtrenching is not perfect. Some cities balk at sawing deep grooves in their pavement because they worry about the pavement cracking. Microtrenching and cable-blowing equipment is expensive, and operators need training. However, the advantages seem to be significant for those willing to give it a try.