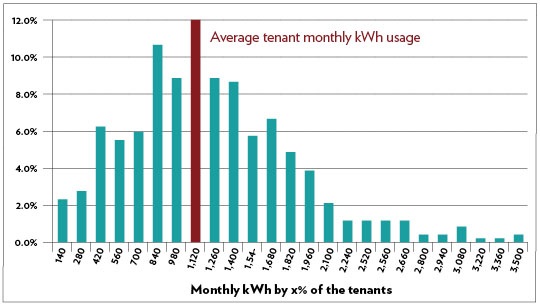 With regard to using submetering practices and smart meters to save energy, the old adage, “What gets measured gets done,” requires the qualifier, “only if someone does it.” Not surprisingly, manufacturers and utility companies are still claiming amazing benefit-to-cost ratios, but in order for consumers to do the same, something else must happen.

Case in point, a recent article stated an average benefit-to-cost ratio of nearly two times from more than 30 smarter business case studies of worldwide utilities that deployed smart meters. In most cases, the illustrious “customer benefit” dollar value made up more than half the benefit, which equates to all of the increase over a break-even perspective. The supposed benefit is based largely on customer satisfaction and on the ability of the consumer to save energy based on a meter that has no easily accessible real-time display indicating the “how much” and “when” of problematic loads. And if consumers really save a lot of money on their electric utility bill, doesn’t the utility then get less revenue, resulting in a negative benefit factor?

The benefit of submetering also could go down the slippery-slope argument path, but there is enough data to indicate otherwise. The payback results are not only real; they provide a good business case for electrical contractors getting more involved in retrofit and new construction programs involving submetering. The following are some key points:

• Electrical costs in industrial/commercial facilities are an element of cost of operation that can be reduced without negatively affecting productivity, quality or the work force, unlike reductions in head count, salaries or benefits to workers.

• Costs in multitenant residential dwellings get more fairly allocated to the minority of those who use much more electricity than the average tenant. Most studies show 60–70 percent of the tenants see a reduced electricity bill as well as a reduced bill for the building overall. The New York State Energy Research and Development Authority (NYSERDA), Residential Electrical Submetering Manual report notes “that the change from master-metering to submetering typically reduces the consumption of electricity in apartments by 10–26 percent.”

• The capital investment is often less than one month’s electric bill, and return on investments often take less than one year, making it very attractive to those who watch their pennies.

• Visualization tools for energy management provide capabilities to see the data in real time and turn it into meaningful information and answers to questions such as “when are my peak demands and what equipment is causing such demand.”

• The newer measuring sensors (current probes and voltage connectors) used with such systems are able to be connected without disrupting the process operation (assuming proper personal protective equipment is worn).

Most meter manufacturers offer different wiring configurations for single/split/three-phase applications. For new construction, the current sensors are usually solid-core, whereas renovation projects can use split-core sensors so that the circuit doesn’t need to be interrupted.

Meters keep getting smaller, requiring a minimal amount of panel real estate to mount. Ensure that whatever meter is specified is ANSI C12.1 or equivalent traceable for its power and energy accuracy. In commercial and industrial facilities, there also will be applications where power meters with some power quality measuring capabilities are beneficial for the keeping the facility’s operation running smoothly. Just like submetering can pinpoint the power hogs, distributed power quality metering helps determine who is causing the problems and if potential problems may exist.

Most systems now use automatic meter reading technologies coupled with energy management and billing software that produces monthly bills and alerts the facility manager when trends in usage change or when peak demands are escalating to where a new demand charge will be incurred. Communication can be hard-wired through serial links using RS-232/485, 10/100BASE-T Ethernet cable, or wireless (802.11g). (Due to security concerns, ensure wireless is allowed in the facility and that the signals can propagate adequately throughout the facility).

After the installation, stay in touch with the facility manager to see how the system is working, what savings were achieved, and if there are opportunities for additional metering points. These types of projects are often similar to archeological digs, where you uncover X percent savings the first time, some more the second time, and so on, though the digging gets tougher as you get deeper, with payback periods elongating. It also gives you credible data to indirectly share with the next potential customer on how much they can save for a relatively small investment.