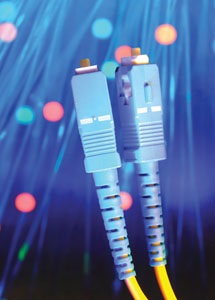 In fiber optics, there has been a lot of discussion about encircled flux (EF), much of it more confusing than clarifying. EF is simply a new way of looking at an old, well-known problem, defining mode control for multimode (MM) fiber testing. Recently, EF has been added to international standards as a means of modal control for testing, not at all what it was originally developed for and well before it has been proven in the field.

The fact that MM fiber needs modal control to get repeatable measurements has been known for the last 30 years. The measured loss of connectors, splices or even the fiber itself could vary widely according to the mode output of the test source. MM mode control has been included in virtually every test standard ever written, but the methods of specifying and controlling it has changed many times. The best-known method of mode control is to use a mandrel wrap on the test source reference cable as has been specified in most standards for the last 20 years.

EF began as a theoretical model of the light output of an 850 nm VCSEL source to allow mathematical modeling of laser-optimized fibers for greater than 10 gigabit Ethernet using those sources. After it was developed as a modeling tool, the same EF definition was promoted as a means of specifying mode control for MM test sources. That usage then required developing a way to test sources for EF compliance, using digital cameras.

There is no question that EF is a much more sophisticated method of specifying and measuring mode fill, but it is only useful if it can be tested and implemented in the field. At the current time, test methods for EF are still under development. An initial round robin of test labs was inconclusive and another is underway, but it is not expected to produce results for another year.

It’s important to remember that EF is a modal power specification rather than an actual implementation or technique. Therefore, any number of methods including special test sources or mode conditioners on patchcords can be used to implement EF. I don’t know of any test sources currently available claiming EF compliance, but then how do you prove compliance until EF has an acceptable measurement technique?

Implementing EF can be done the same way mode control has been done for more than 20 years, using a mandrel wrap. In fact, a new international document (IEC 61282-11) states that the method currently specified in TIA standards is close enough to EF. So it seems the solution you have been using for years works just fine.

Unfortunately, in the rush to adopt EF, two other problems have arisen. After the development of EF, one paper claimed to prove that optical time-domain refllectometer (OTDR) testing with EF launch conditions would match insertion loss tested with a light source and power meter under similar conditions. However, the conditions of the test were limited to multimode cable plants of less than 2 dB loss. That paper led to a new international testing standard that allows either OTDR or insertion-loss tests for cable plant acceptance testing. That same standard has been adopted to replace the previous TIA standard for testing the loss of installed cable plants, OFSTP-14, which has been in use since the late 1980s.

Unfortunately, no one has yet proven the value of EF testing for the rest of MM testing, links up to 10 dB or even more, nor has the correlation between OTDR and insertion-loss testing been proven valid over 2 dB loss. It may well be that the standards community has created a standard that does not work for most situations but is not limited in scope to exclude them.

While some media has been touting EF as the way to test today, it’s really way off in the future. The flawed process of its acceptance has created more problems than it has solved. Several people, myself included, have made presentations to the standards groups, pointing out the problems they have created and proposing ways to rectify them, but it may take years before that trickles through the committees.
What’s a contractor to do? Well, my advice is to continue doing exactly what you have been doing. If your customers ask, tell them EF is a new standard that is still in development and that the mandrel wrap method currently in TIA is supposed to meet EF requirements. If they ask for OTDR tests instead of insertion loss, point out that is not how their system works and may provide erroneous data. In the meantime, clip this article to show any customers who ask about EF, and email me if you need backup!

HAYES is a VDV writer and educator and the president of The Fiber Optic Association. Find him at www.JimHayes.com.