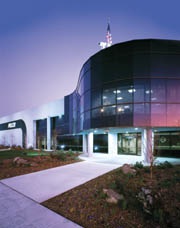 Remember the V-8 advertisement where the guy slapped his head when he realized he had missed his chance to have his favorite drink? Having a “V-8 Moment” about security systems as the crooks escape a bank robbery is bad news all around. Security expert James Turk of Turk Investigation & Protection Corp., Cleveland, Ohio, has some common sense tips for avoiding such moments. He believes that with the proper education and background, an electrical contractor can successfully install an effective closed circuit television (CCTV) surveillance system for a bank or financial facility.

Turk warned that the latest technology and the bottom line are at odds. The newest technology is always the most expensive, but finding out it’s obsolete six months later is not uncommon. So make your installation count by doing your homework first.

Turk agreed that CCTV is a great solution for monitoring activity in public areas. However, with the spread of ATMs and 24-hour businesses, the need for specialized applications also exists, including surveillance in extreme low-light or even no-light environments.

The environment in which CCTV will be deployed determines its application. Remember that your installed CCTV components must be able to function in a variety of conditions, including those subject to dust, dirt or moisture, shock, vandalism, extreme hot or cold, lack of or too much light and even critters that go bump in the night. The bottom line is that a high-quality image nearly always makes a noteworthy piece of evidence.

Turk said that it is well known in the security community that leading manufacturers may release “current” equipment when the next generation has already begun to move into production. It’s a fact of life. And of course, because so much of the technology is tied to the computer and Moore’s Law, changes often come quickly.

Turk said his company has also specified and installed several Panasonic WV-CW474 series Super Dynamic color cameras, which have the technology to automatically switch between day and night capabilities. In addition, motion sensors send alarm signals and units are shock and vandal resistant with a die-cast aluminum body and 3.5mm polycarbonate dome. The camera lens has a spring structure so the chassis can withstand several severe external shocks. Its operating temperature is between 14 and 122 F, and that’s no small point, Turk attested.

“Last winter I assembled and installed four cameras outside during a Cleveland blizzard in February at 4:30 a.m.,” he recalled. During the entire installation process the temperature was –7 degrees F, with wind chills of –20 degrees F. “The exposed hardware and assembled cameras operated flawlessly,” Turk said.

That’s when proven, reliable technology comes into sharp focus. “When I’m 30 feet in the air on a ladder, during a blizzard, I don’t want equipment failure. I don’t want to have to reinstall components.”

The bank of tomorrow

For banks, financial institutions and other public arenas where conditions for armed robbery or hostage situations exist, Turk recommended CCTV technology in a layered approach both inside and outside the protected premises.

“I would augment it with Wireless Video Transmission (WVT),” he said. While WVT is in the early stages of development and has proven its worth in controlled environments like NFL football games, it requires support vehicles the size of mobile homes. “It is not yet feasible to deploy such equipment to every branch of a bank or public place,” Turk said.

However, there are scenarios where it will work today. Law enforcement typically arrives near the scene, but out of camera range and beyond view of the bank. A police supervisor will break out a briefcase-sized command center and send an encrypted signal to the bank cameras. The cameras will begin wireless transmission of encrypted video to the briefcase command center. The entire event is monitored. The threat can be assessed and countermeasures begun. But Turk cautioned that this kind of video transmission technology is best for short distances, without obstructions.

“Video transmission is extremely useful but limited at this time,” Turk said. However, he sees the day of affordable, mobile, lightweight, easily managed and simple-to-operate and maintain CCTV in the not-too-distant future.

Most contractors are familiar with the monstrous black camera domes that hang from ceilings in the local bank or savings and loan. Much of that technology has changed and small, unobtrusive units are the way to go—and they still have all the functions and more. There’s also an array or covert equipment that disguises cameras behind pictures, clocks, smoke detectors and more. For the installers, there are cameras with three-dimensional hinges (pan, tilt and azimuth). This allows the camera to rotate 320 degrees, tilt 150 degrees and azimuth 320 degrees.

All this technology may present some new challenges to the electrical contractor. “Due to its compact design, magnification and tools resembling eyeglass screwdrivers are required to install and adjust dipswitch controls,” Turk said. A compact monitor-out terminal with a small display allows the electrician to adjust settings and observe changes immediately. Pre-assembled camera kits, with lens, motor, housing, and dome eliminate the need to purchase the items separately, and may also cut installation time as well.

“Video recording is mandatory,” Turk stated. Drawbacks of videotape include storage problems and tape degradation. “Make no mistake, a tape that is on a continual loop (recording 2, 4 or 8 hours, then automatically rewinding and recording over the previous loop) degrades dramatically. But until recent years, this was the only game in town.

“Now, I have to admit that tape is probably ‘dead.’ Even most video stores are phasing out videotape and replacing it with digital video. Shouldn’t your security system be equal to your entertainment system?”

Turk said that digital video recorders are the latest proven accessory for documenting surveillance. Not only is it easy to enhance the digital image, but the system provides 60 hours of digital versus six hours of videotape recording—and that is before digital compression.

“Digital image quality is blur-free. Image quality always remains sharp, regardless of the number of times the images are played back,” Turk said. He is adamant that an electrical contractor shouldn’t let a customer, especially a financial account, purchase or install anything but digital technology today.

Taking stock of the components available—and what the end-user wants to protect as well as other variables, is the only way to go in effective CCTV installations for banks and financial institutions. Consider all the options, and then select the best package for the customer and the application.