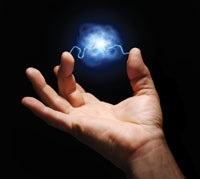 In the national advance toward a comprehensive smart grid, one technology is emerging as an integral component. Energy-storage systems allow power that is generated during off-peak times to be stored at sites distributed throughout a utility’s network and returned to the grid when the demand is at its greatest.

Utilities in two states have recently announced major power-storage projects. With $75 million in stimulus funding from the federal Department of Energy, the Ohio-based utility American Electric Power has launched a gridSMART Demonstration Project, which will integrate a broad range of advanced technologies and consumer programs. It will be deployed to 110,000 customers in northeast central Ohio.
Recently, the utility chose the Community Energy Storage (CES) systems, developed by Chicago-based S&C Electric Co., to help implement gridSMART. The CES systems provide a number of the benefits of distributed energy storage, including load leveling, backup power, support for plug-in electric cars, grid regulation and distribution line efficiency.

S&C also selected International Battery of Allentown, Pa., to manufacture the large-format, lithium-ion rechargeable battery that will provide storage for the CES systems.

The technology is highly efficient with a life span of about 15 years. The installation will be a 4-megawatt (MW) system with a 28-megawatt-hour storage capacity. The capabilities of the battery-storage system include offering emergency power during outages, leveling the energy-demand load, and providing reserves when needed.

Also in California, the Southern California Public Power Authority has teamed up with Ice Energy, an energy-storage solutions provider, to undertake what the partners are describing as the nation’s first utility-scale, distributed energy-storage project.

The 53-MW project, to be implemented by SCPPA member utilities throughout Southern California, will permanently reduce California’s peak electrical demand by shifting as much as 64 gigawatt-hours of on-peak electrical consumption to off-peak periods every year.

Installation of Ice Energy storage systems will begin in the first half of 2010, with deployment scheduled over two years.