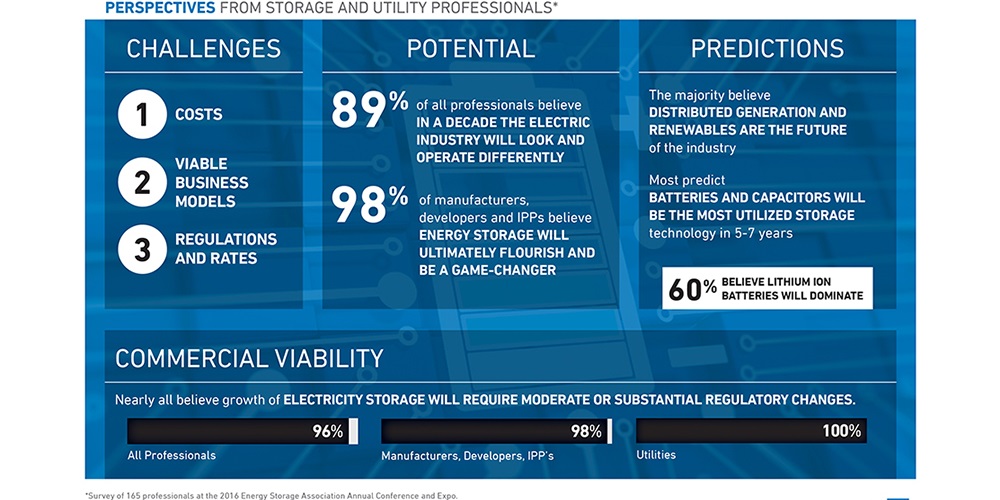 Transformative technologies have almost become the new norm in the age of digital communications and renewable power. For example, consider the impact of cell phones, Wi-Fi, the internet, wind and solar power, and electric vehicles on the industries, markets and consumers that have adopted them. Now, add energy storage to the list.

According to a new study, energy storage will transform the nation’s energy distribution infrastructure. Mortenson, a Minneapolis-based construction and development services company, recently surveyed 165 industry professionals at the Energy Storage Association Annual Conference and Expo. The results were published in a study, entitled “The Rise & Future of Energy Storage.”

Not surprisingly, industry experts believe most of that change will occur in areas where storage is paired with renewable generation. They also believe that this pairing and the changes it will bring will have an equally transformative effect on utilities. Eighty-nine percent of the survey respondents believe the electric power industry “will look and operate differently a decade from now” as a result of the competition and the changing roles that this disruption will bring.

In commenting on the study, Brent Bergland, general manager at Mortenson, projects a “quantum leap” moment when falling costs and a more favorable regulatory environment will allow the market to “just take off.”

Mortenson says a previous industry study supports this scenario, with a forecast of global utility-scale, grid-connected battery storage growing to 12 GW by 2024.