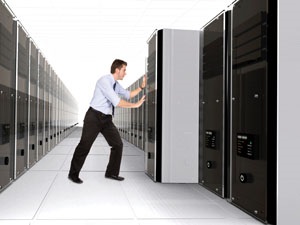 One of the largest emerging trends in data center technology is 10 gigabit Ethernet (10GbE). According to Bud Noren, senior product manager, Fulcrum Microsystems, there are three high-level trends that have become forces within the data center: consolidation, virtualization and convergence. These trends have been continuing to grow, and 10GbE ad-vancements have made it a viable alternative after years of speculation.

Most of the trends are direct responses to problems that have been plaguing data centers for years. Power, cooling and heating costs have spiraled out of control to the point that some of these changes are being made due to budgetary necessity.

According to Noren, issues previously associated with 10GbE have been resolved, and it is almost on a level playing field with in-cumbents, such as InfiniBand, QSNet and Myrinet.

“Latency is a critical issue and a key parameter. Ethernet had been known for having high latency in the past. But, with new switches like Fulcrum’s FocalPoint, we can achieve low latency comparable to InfiniBand,” Noren said.

Initially, data center owners opted for geographically dispersed locations. As leases have come due and as energy costs have continued to soar, many have taken a new look at the benefits associated with location consolidation. The flip side of consolidation is that the main facility into which the other peripheral facilities are rolled now is taxed with much higher network demands.

This is where 10GbE can become an asset to the data center itself. When so many critical systems and components are housed in one facil-ity, demands on the chosen interconnect are increased, and greater importance is placed on its overall ability.

As networks grow, switch scalability becomes a key factor. In addition, with surging storage requirements, it is one network aspect that most likely will be expanded continually, further illustrating why scalability is critical.

Switch architectures built upon Fulcrum’s FocalPoint 24-port switches can scale up into the thousands of ports of 10GbE connectivity. This satisfies both the speed requirement and scalability issues.

Server, storage and desktop virtualization continue to permeate all aspects of IT. Since data centers are the epitome of concentrated IT, they have been quick to jump on the virtualization bandwagon.

Because greater emphasis is placed on the network’s ability to handle increased loads, it is imperative that the network has the speed and reliability required to keep the system up and running. In the virtualized world—although the amount of physical servers has been reduced—the importance of the remaining servers to operate as quickly and effectively as possible is pressing.

10GbE switches can maintain features, such as network partitioning, scalability and security; thus, the network can react accordingly to its ever-changing design.

Data centers often use multiple networking protocols. LAN traffic is generally run through the Ethernet, storage through fiber channel and cluster traffic through InfiniBand or other clustering technology. It has typically been common for each type to use its own inter-connect.

When those consolidating opt to converge networks, “the trend is to go with a single fabric, and we are working hard to enable Ethernet as that one fabric,” Noren said.

Many veiw the convergence of disparate fabrics within the data center a way to make Ethernet the interconnect of choice. However, accord-ing to Noren, “One prevailing problem with Ethernet had been that it was prone to congestion, but the sophisticated congestion management mechanisms that are being built into current generation silicon address that issue.”

The biggest benefit in terms of convergence is the ability to manage and maintain only one type of fabric, rather than three disparate ones. New switches, such as the FocalPoint, have the ability to route network, storage and cluster computing traffic in the most advanta-geous manner. Their ability to monitor and control things, such as scheduling, flow control and traffic prioritization, make them suitable for data centers just staring to look into true convergence.

The mainstream adoption of 10GbE is something that will take some time to achieve, but it seems like things are on the right track for Ethernet to pick up where it first left off.

“Ethernet has continually undergone improvements over the years,” Noren said. “Those improvements have allowed it to prevail as the most ubiquitous interconnect despite upstart technologies—FDDI, token ring, etc. History has shown that other interconnect technologies tend to disappear as soon as Ethernet is enhanced to include the proper set of features, and this is happening now with 10GbE.”