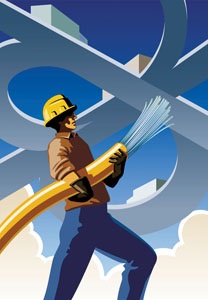 Last month, I discussed the current status of broadband networks and the emergence of wireless as the preferred connection, since most users want mobility for their broadband-connected devices. Often, I find people think wireless means no more fiber optics (or any cabling at all), but that’s hardly the case.

Likewise, cellular phones, smartphones, Wi-Fi-connected laptops and tablets are “cordless,” but as soon as they connect to their respective networks, they virtually connect to fiber or copper cabling. The exception is some cellular towers in remote areas where the tower links to the phone network over line-of-sight wireless, using round dish antennas you can sometimes see on the side of cellular towers.

Most cellular towers have been converted to optical fiber connections to the phone system to provide the bandwidth needed for expanded services. The fiber connecting the towers is the usual telco grades of single-mode fiber. Many towers are using wavelength-division multiplexing to expand the capacity of fibers already placed to avoid having to install more fiber to the tower.

The latest trend affecting cellular towers is to run fiber up the tower to the antennas. In the past, coaxial cable has been run up the tower to the antennas, but with the proliferation of new antennas needed for next generation cellular coverage, the massive bundle of the coaxial cables has become too big and heavy and has too much wind resistance. All those bundles of coaxial cable can be replaced with one small fiber cable, and the same cable often includes the power conductors for the antennas. These cables are made to order, cut to the proper length and terminated in the factory-, so they can be installed by simply plugging in the proper connectors at the antennas and in the equipment hut. These cables may be either multimode or single-mode fiber.

You have probably noticed how good cellular coverage is inside large public buildings, such as convention centers or even inside tunnels. If you look closely, you may see small cellular antennas placed inside those structures. They usually use single-mode fibers that run back to the equipment room to connect to the phone system. A similar technology is being proposed for use in urban areas. Small, low-power antennas using one single-mode fiber are being developed to expand the coverage of cellular systems and to expand capacity, since each antenna covers a smaller area with fewer users who share the available bandwidth.

Wi-Fi access points also are proliferating also, since they provide connectivity for smartphones, laptops and tablets. Corporate Wi-Fi often uses Cat 5e/6a to connect the access points because many can be powered over the unshielded twisted-pair (UTP) cable using power over Ethernet (PoE) to avoid additional power requirements. But once you get into large public buildings or go outdoors for municipal Wi-Fi systems, the cabling distance is over the 100-meter limit for UTP cabling, and fiber connections become the norm. Indoors, multimode fiber is often preferred while most outdoor systems use single-mode fiber (see page 70 for more on municipal networks).

Another variation of Wi-Fi also is being tested. This version uses different frequencies for transmission, in the 100–700 megahertz region, where spectrum became available when TV switched from analog to digital transmission. It’s called “Super Wi-Fi” for a good reason. At lower frequencies, it can go much farther than regular Wi-Fi—perhaps as far as 50 miles—making it possible to reach rural areas where it is uneconomical to run fiber all the way to the user. If field trials are successful, expect to see a lot of Super Wi-Fi towers being built in rural areas and connected over fiber.

Super Wi-Fi may take over the role proposed for WiMax, another wireless variation that keeps being promoted but seems unable to get enough traction to become successful. Coverage is spotty, and few devices make direct connections over WiMax.

From the fiber optic installation standpoint, none of these wireless technologies are out of the ordinary, unless you don’t like climbing towers to plug in cables. Any premises or outside plant contractor familiar with fiber optic installation is capable of installing these systems. If it also is necessary to be involved in the design of the wireless networks, bring in an experienced wireless designer. Picking antenna locations is a very tricky process.

HAYES is a VDV writer and educator and the president of The Fiber Optic Association. Find him at www.JimHayes.com.