Native Champions for Solar: The sun is rising on renewable power installations on Tribal lands 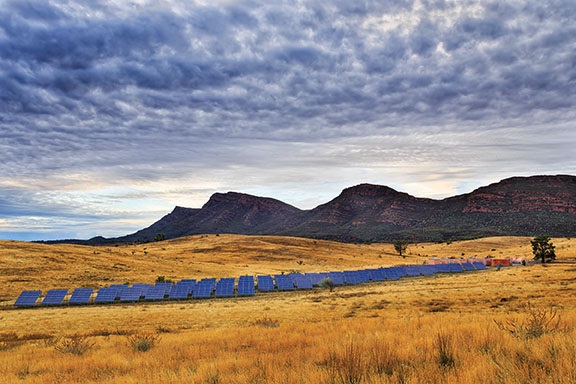 Native American tribes in the United States can face a frustrating conundrum: their reservations have long been the source of fossil fuel resources for electricity generators, yet their own people have been among the last to enjoy the benefits of easy access to that power.

Native American tribes in the United States can face a frustrating conundrum: their reservations have long been the source of fossil fuel resources for electricity generators, yet their own people have been among the last to enjoy the benefits of easy access to that power. Significant numbers of Native families still lack electricity, with the remote nature of many reservation homes making it difficult and expensive to establish grid connections.

Now, a number of tribes are taking matters into their own hands—quite literally—through programs to develop their own renewable resources and power up reservation homes using solar-plus-storage technologies. And they’re also providing training opportunities for members of their own and other tribes seeking to build careers in renewable energy installation.

The U.S. Department of Energy estimates that 14.2% of Native American families living on reservations still lack electricity, compared to only 1.4% of all U.S. households. On some reservations, the situation is particularly bad. In Navajo Nation, which stretches over sections of Arizona, Utah and New Mexico, almost 30% of residents lack any access to electricity. This is despite being home for decades to one of the nation’s largest coal-fired generating plants, the Navajo Generating Station, which ceased operations in November 2019.

There are certainly efforts to reach remote Native residences with traditional wires and poles. Over the last few years, “Light Up Navajo Nation,” for example, has brought in lineworkers from across the country to bring grid-connected service to several hundred homes. But this work is slow-going, as that reservation alone has 15,000 homes in need of power.

That challenge has led to a local nonprofit, Native Renewables, developing a program to install solar-plus-storage systems for residents of the Navajo Nation and adjacent Hopi Tribe reservations. These 2.1-kilowatt (kW) systems are less than half the size of the 5-kW systems the Solar Energy Industries Association says is the U.S. average, but they still support lighting, a high-efficiency refrigerator and, potentially, a well pump, for a family that’s never enjoyed what most Americans consider to be essential services.

Scaling up such approaches, though, requires workers. Native Renewables has also helped sponsor solar installation training to help electrify tribal employment. Two additional efforts in California and Minnesota illustrate the potential for growth that can be achieved when an emphasis on Native-led renewable development is paired with worker training.

Blue Lake Rancheria (BLR) is the name of a tribe and reservation in Northern California’s rural Humboldt County. The 76-acre reservation might be comparatively small, but it has already had a big impact in renewable-energy development nationally. Two decades ago, tribal leaders began planning ways to make their operations—which now include a hotel, casino and gas station/convenience store—more sustainable and resilient. Those plans grew as the tribe reached out for practical assistance to local utility Pacific Gas & Electric (PG&E) and the Schatz Energy Research Center at California State Polytechnic University, Humboldt. The reservation is now home to four different microgrids that have helped its own members and surrounding residents during several PG&E outages.

“The tribe has always incorporated backup power, and, a couple decades ago, the primary option was diesel generators. But we knew that cleaner and more resilient energy sources were on the way,” said Jana Ganion, BLR’s sustainability and government affairs director. The tribe’s efforts began with building its convenience store to be solar-ready in 2006, even though funds weren’t available for the panels and electrical connections at that time.

“This area is pretty remote and pretty tenuously connected to the grid, so outages can be often and long. We weren’t thinking about microgrids, but we definitely were thinking about being off-grid capable,” she said.

Efficiency upgrades for the hotel and other community buildings soon followed, and, in 2014, the tribe completed its own biodiesel manufacturing plant to repurpose waste from its hotel and casino operations as fuel for its public transit buses. But the real news was the unveiling of BLR’s first microgrid in 2017, which included a ground-mounted, 500-kW solar array and a 1-­megawatt-hour (MWh) battery-storage system. It can support BLR’s six-building campus and provide emergency power to a certified American Red Cross shelter.

In 2019, the tribe added an additional 1 MWh to the community microgrid and opened a second, independent microgrid centered around the convenience store, using the solar-ready canopy first installed in 2006. The 60-kW solar/169 kW-hour battery storage installation offers a replicable resilience package for other small commercial buildings.

“Redundancy is important to resilience—things break,” Ganion said. “If our big microgrid goes down, we have another on a separate side of the campus.”

Finally, last year BLR completed its Ta’m Resilience Campus, a training facility and business incubator that includes two micro­grids, one of which is “nested” inside the other. This design allows both systems to island from the grid together and from each other, should that be necessary. This installation, which Ganion calls the tribe’s “R&D project,” fits into the larger goals of the campus.

“It’s a training, education and incubation facility focused on climate-resilient development,” she said. “And, in emergencies, it’s designed to be used as an emergency operations center.”

The microgrids have made a big impact on the tribe’s electric utility bills, as energy managers are able to switch over to their own energy supplies during PG&E’s peak demand periods. But, more importantly, BLR also has been able to serve as a refuge during the outages—most notably during a public safety power shutoff the utility enforced in October 2019 during the worst of the region’s wildfire season.

“Thirty counties were de-energized at the same time, and it came with only a few days’ warning, and power was shut off for 30 hours,” Ganion said. Among other services, BLR made room in its hotel for medical patients needing power for their life-sustaining equipment. “We were credited with saving lives in that event.”

Henry Red Cloud began his journey into renewable energy with an obscure solar technology developed to provide sun-powered heating during daytime hours. After years working in several different construction trades, he founded Lakota Solar Enterprises on the Pine Ridge Reservation in South Dakota, home to about 28,000 members of the Oglala Sioux Tribe.

The company still manufactures his solar air heaters, which use a solar collecting unit to create heat that’s circulated through a home using photovoltaic panels to power supply- and return-air blowers. Obviously, this isn’t a 24-hour solution, but the company says as a supplement, its inexpensive systems can cut heating bills by 20%–25%. This can be a significant savings for tribal members on a reservation where unemployment has been estimated to be as high as 85%.

As Red Cloud began contacting other Northern Plains tribes, he found interest in solar-generated electricity. He then reached out to Solar Energy International (SEI), a nonprofit based in Paonia, Colo., which is focused on training for solar electric and thermal installers. In 2008, he opened the Red Cloud Renewable Energy Center (RCREC) to bring professional training to Pine Ridge. Now, RCREC offers SEI-certified solar-installation training to Native Americans from across the country, with an additional emphasis on training tribal members to become trainers themselves to help boost Native employment nationally.

“It’s been part of my work all along to get Natives certified by a major solar-certification program,” Red Cloud said. “It opens doors all over the country, from retail to maintenance. And then, to have them come back as tribals training the trainers.”

SEI and Red Cloud have developed what he calls a solar curriculum “with a Native twist.” The Tribal Train the Trainer (T4) programs include components of Native language, to incorporate the culture of the Northern Plains tribes. RCREC has trained members of the Navajo Nation, who are now installing solar and battery systems for Native Renewables.

“Their language is also very strong within their communities,” he said.

RCREC provides the training and certification for free to classes of 5–7 students, who make a significant time commitment that includes two weeks of classes on the RCREC campus and an additional two weeks at SEI’s Colorado training facility. Students must then pass testing conducted by the North American Board of Certified Energy Professionals, a national accreditation organization. Then they are certified as installers. To become certified as trainers, they return to teach the entry-level class.

Red Cloud said he raises interest in the training programs through a lot of in-person relationship building—at least when a pandemic doesn’t stand in the way.

“I go visit the tribes—I’ve been doing that over the years,” he said, adding that he has also given presentations at major solar and tribal conferences to build more awareness. He uses a tribal phrase to describe the publicity provided by T4 graduates as they return to their communities. “I would say the ‘moccasin telegraph’—one-on-one word-of-mouth—is the best outreach advertisement.”

All these outreach efforts are paying off in growing interest.

“Every year, we get busier. This year, we’re looking to hold two T4 programs as well as two of the professional certification programs. These students are going to go back to their communities and talk them up,” Red Cloud said.

This self-proclaimed “solar warrior” also sees a need for more organizations to start similar training efforts in other tribal communities. There can be a spiritual aspect to how Native American solar advocates talk about the technology’s ties to tribal beliefs in their strong connections to the Earth and sun. Red Cloud sees opportunities for many of the other 574 federally recognized tribes to bring clean, inexpensive solar energy to their own members.

“We’re in partnership with other people to start up in their regions,” he said. “There are two that I know of that are very interested in setting up their own training facilities—but we need a lot more.”