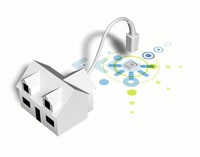 Electrical contractors and independent wiring companies have been installing communication wiring in homes since the use of copper lines to distribute telephone signals became standard. According to Residential Technology Services, San Antonio, Texas, the industry standard in the early 1980s was running one physical line with either one or two pairs of lines inside. It wasn’t until the mid-1990s that new homebuilders realized the advantages of running Category 3 and Cat 5 cabling to support multiple phone lines as dial-up Internet services began permeating homes. At the same time, builders began to run RG-6 coaxial lines to support cable and satellite television.

In a little more than a dozen years, home use of the Internet has grown tremendously. However, a recent study commissioned by the Federal Communications Commission (FCC), shows that, of 117 million existing American homes, 49 percent have no broadband access to the Internet, about 11 percent still use dial-up services to surf the Web, and close to 38 percent still have no Internet access at all. With most new homebuilders, architects and even homeowners not normally taking technology into account, electrical contractors have tremendous opportunities to successfully position themselves in the residential wiring market by providing homeowners with new flexibility and features.

Electrical contractors can offer several technologies to builders and homeowners, either separately or in concert with each other. In addition, because proprietary wiring seems to be narrowing in scope to be Ethernet- and Internet protocol-based, new construction jobs are simpler, and retrofit construction projects are easier to wire. With an inventory of existing on-the-market homes in the United States now up to about 11 months (until the supply would be diminished at the current sales rate) and new construction not picking up quickly, the opportunities for electrical contractors in the retrofit market are numerous, according to Utz Baldwin, CEO of the Custom Electronic Design and Installation Association (CEDIA), Indianapolis.

In a September 2009 survey of 557 electrical contractors by Parks Associates, Dallas, a majority of the respondents reported that they are already installing entertainment and other low-voltage systems in residential applications.

“Opportunities are growing for contractors to expand their offerings from a variety of reputable manufacturers of wireless and power control systems for lights, security and home entertainment systems,” Ablondi said.

According to Baldwin, wireless technology has improved in terms of reliability, distance, security and connectivity.

“Wireless networks are becoming more robust, can support a greater number of products, and it is now easier to incorporate new technology into them in retrofit applications,” he said.

In addition, wireless technologies, such as Z-Wave (a wireless communications proprietary standard designed for home automation and to control applications in residential environments) and Zigbee (a specification for a suite of high-level communications protocols for wireless personal area networks), are becoming useful in the realm of home energy management and smart grid deployment.

“Because of smart grid deployment, homeowners are going to see more smart meters from their utilities, which will have a wireless Z-Wave or Zigbee transmission protocol,” Baldwin said.

The smart meters will communicate with the house’s thermostats, lighting controls and other monitoring devices to provide homeowners with increased flexibility in managing their energy consumption.

“Major improvements have been made to structured wiring systems, such as connectors that are designed to be tool-free, eliminating excessive labor time and increasing efficiency in the field,” Sullivan said.

Patch cables that work inside the home’s structured media center also are being redesigned to be ultra-high flex.

“The narrower gauge enables contractors to route cables around tight corners and around other products with reduced tension at the connections points,” he said, adding that the wireless systems, which are certainly convenient, are still reliant on a hard-wired network. “From a speed or performance perspective, the fastest wireless system is still slower than a wired system.”

Other wired technology, such as HomePlug, is enjoying a rebound in popularity and is also improved. With HomePlug technology, the electrical wires in the home distribute broadband Internet, high-definition video, digital music and smart-energy applications.

Other technologies that enable electrical contractors to provide homeowners with new flexibility and features are multimedia over coax and HomePNA. These deliver networking and other signals over existing phone lines or coax cable and offer a great deal of bandwidth, one which makes them viable competitors in retrofit applications.

The concept of raceway goes back to when structured wiring first entered the home, Sullivan said.

“A structured wired system provides a common distribution point for low-voltage home networks. Raceway can be compared to a structured wiring system in that it enables a contractor to upgrade for future needs and improve a home’s network system affordably,” he said.

Currently, however, raceway is not used in most residential applications, although it might be found in a very high-end custom installation or in multidwelling unit (MDU) applications. Actually, manufacturers have developed structured wiring enclosed with end caps that can allow for larger commercial conduit sizes for the MDU market, Sullivan said.

“The structured wiring enclosure becomes a junction box for the building and enables connections to other floors from that common point,” he said.

As far as traditional commercial raceway is concerned, however, Steve Lampen, multimedia technology manager for Belden Inc., Richmond, Ind., can’t imagine it being used in a home.

“Raceway will find its way into the homes of tomorrow and make them more adaptable to future technologies,” Baldwin predicted.

Actually, CEDIA already recommends that, if possible, builders plan for technology and design homes for conduit to be run to key locations to enable easier, faster and more cost-effective installation of the next content-delivery technology.

To provide homeowners with the flexibility and features attainable through today’s technology, electrical contractors need to know what homeowners want.

“The most popular feature for a home today is multiroom audio,” Ablondi said.

But audio is just the tip of the entertainment iceberg; home-owners want to listen and view content wherever they choose. And they don’t just appreciate performance; they expect it, Baldwin said.

“Technology touches just about every element of our lives, providing opportunities for contractors in every aspect of home building and design,” he said.

There is also increasing interest being expressed by home-owners for energy management systems.

“Sixty percent of respondents to a Parks Associates survey said they were very interested in light-dimming systems to help them save on energy bills,” Ablondi said.

According to Sullivan, homeowners also expect the ability to integrate their consumer electronic products.

“Beyond computers, homeowners now expect that the home have the data jacks or other Ethernet ports that enable them to easily use Blu-ray players, satellite TVs, game consoles, etc.,” he said.

Lampen expands that idea even further and predicts that there might be a convergence in the home, paralleling what is now taking place in commercial and professional spaces, where all signals are carried by one very wideband networking scheme.

“This could dramatically simplify the home entertainment system, essentially reducing all cables to one,” he said.

Meanwhile, manufacturers are already embedding structured wiring into the functionality of new consumer technologies in the expectation that the home will have the appropriate wiring and connection points.

“Technology is going to further proliferate in the home and there will be a growing need for qualified electrical contractors to deploy the ensuing demand,” he said.

As more products become Internet protocol-centric, residential electrical contractors, whether in new construction or retrofit, will have to learn crucial systems-integration skills.

“The technology that will get embedded in the home will allow consumer products to communicate with each other, affecting homeowners’ safety and comfort. Electrical contractors need the necessary education and resources to successfully diversify their offerings to include residential technologies,” Baldwin said.

Electrical contractors will certainly need the capability to prepare entire networks for the homeowner and ensure that the system is capable of supporting a wide range of consumer devices, Sullivan agreed.

“Consumer electronic products are being introduced every year and are increasingly demanding a place in the wired home network infrastructure, from IP-ready televisions and video game consoles to digital photo frames,” he said.

Electrical contractors also will have to stay current on technologies that are emerging into the forefront, such as power line and wireless technologies that extend controls and distribution of video and audio content beyond the wired structured systems.

“Contractors will also need to understand more about the consumer electronic products themselves in order to recommend the best and appropriate wired and wireless systems,” Ablondi said.

Someone buying a home today is most probably looking at a 20-year plus investment. With that fact in mind, it’s important for electrical contractor to understand today’s technology and what will be required to support new residential technologies in the future.