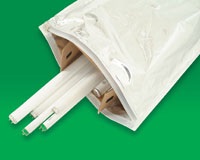 When Gov. Chris Gregoire signed Senate Bill 5543 in March 2010, Washington became the first state to address concerns for the safety of packaging and transportation of used fluorescent lamps and mercury-containing devices. This new legislation may be the precursor of future state and federal legislation as awareness of mercury-vapor dangers increases.

The new law requires that lamps and other mercury--containing devices be packaged and shipped in material that will minimize the release of mercury into the environment. The law also states that packages should include mercury-vapor barrier materials if lamps are transported by the United States Postal Service or a common carrier or collected using curbside programs and mail-back businesses.

The new law was partially influenced by research published in the March 2009 issue of the Journal of the Air & Waste Management Association, which finds packaging for transporting used fluorescent lamps needs stricter legislation to prevent the release of mercury vapor from used lamps. The results indicated four out of five commonly used packages failed to minimize levels below acceptable occupational exposure limits, as defined by state and federal regulations and guidelines.

If your business is in Washington, this is something your customers may need to know. Keep an eye out for other states adopting similar legislation.