'Twas the Season to Be Green 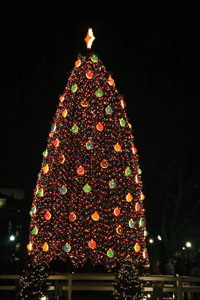 This past holiday season saw a large trend of holiday lighting with light-emitting diodes (LEDs), which use one-fourth the energy of incandescent bulbs and, in this case, are actually brighter, meaning holiday decorators can use less lights to brighten up the same amount of space.

“LEDs are substantially more efficient than incandescent lights,” said Tom Reddoch of the Electric Power Research Institute. According to Reddoch, a 50-light string of LEDs uses 2 watts of power, and the same size string of mini incandescent bulbs uses 11.5 watts. “Because LEDs are brighter, fewer strings could be required,” he said.

The nation’s capital lit up with energy-efficient LEDs. On Dec. 6, 2007, President Bush turned on the National Christmas Tree, which was outfitted with LEDs for the first time. A 1,000-foot red garland and 42-inch star topper also featured LEDs. Another famous tree featured LEDs for the first time in history. The Christmas tree in New York City’s Rockefeller Center featured 30,000 LEDs.

Elsewhere in Washington, D.C., the Friends of the National Zoo (FONZ) held a ZooLights event, decorating the National Zoo with strings of LEDs in the shape of the very animals for which the zoo is home. FONZ claimed its lights used approximately 90 percent less energy than incandescent bulbs. Furthermore, FONZ powered some of its lights with a hydrogen fuel cell, which produced electricity by combining hydrogen with oxygen from the air.

In other cities, such as Monroe, Ga., local authorities are draping buildings and trees with LEDs for the first time. The Monroe Downtown Development Authority expects to pay just $146 to power them this season.

“Some people are saying if we’re using that little energy, why not keep them up all year long,” said Stacy Jones of the Downtown Development Authority.

Some cities, however, such as Toledo, Ohio, have been energy efficient with holiday lighting plans in previous years. About 35 percent of the 1 million lights in the Toledo Zoo were LEDs. The city also lit a 90-foot tree with 32,000 LEDs.

Of course, all this is more support for the green trend, and it is proof that more people are becoming energy conscious, and further, it means more work for electricians.  EC