Their Side of the Mountain 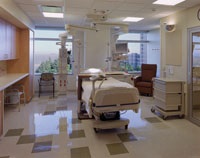 Oregon Health Sciences University (OHSU) ranks as one of the nation’s most respected and leading healthcare centers; known for its exceptional healthcare and cutting-edge research, particularly on the West Coast, the main campus is located on the side of the West Hills, overlooking Portland, Ore.

For more than 60 years, Dynalectric has been a company dedicated to providing personalized electrical services to customers and contractors in the Portland area and across the Pacific Northwest.

“As an EMCOR subsidiary, we bring the power of the largest specialty contractor in the world into focus with our personal commitment to protecting the best interests of our customers through completing projects safely, on schedule and with outstanding craftsmanship,” said Randy Wagner, CEO, Dynalectric Co.

Dynalectric worked on the OHSU Peter Kohler Pavilion Patient Care Facility project for about two years, from April 2004 to June 2006. The majority of the work it performed was electrical, fire alarm and teledata systems.

For just the electrical portion of the project, there were 79,000 man-hours with an average of 18 electricians and peak of 42. There were six runs of bus duct, and each one was 500 feet long and used to feed the new building. The busses ran through the new construction and into the existing facility where the new Caterpillar paralleling gear and generator were located.

“In addition to the bus duct, we furnished and installed the switchboards for five separate systems: normal, emergency, critical, equipment and life safety power. This was in addition to all conduit wire and other related and corresponding systems,” said Ken Moyle, project manager.

The fire alarm system further complemented the life safety aspect of the project.

“The fire alarm system is an analog addressable system that is part of a campus-wide fire alarm network consisting of approximately 35 different nodes,” said Gary Hatch, Dynalectric’s fire alarm specialist. The PCF building has two nodes located in the MDF room on the third floor and a microphone station in the fire command room on the ninth floor. Each floor has a Miniplex transponder panel located in the east electrical room and a Miniplex.

A state-of-the-art voice and data system also was part of the specification. For the Ortronics clarity-structured cable system, Dynalectric provided both the hardware and materials required. The system consisted of 1.4 million feet of Category 6 cable, which was terminated to 2,200 quad workstations. In addition, Dynalectric provided and installed more than 180 48-port patch panels.

In addition, Dynalectric installed and terminated 1,500 feet of 1,800-pair building copper to tie into the telephone demarcation point for all telephone and service provider connections. The contractor installed fiber optic cable in excess of 16,000 feet and also terminated and certified roughly 2,000 fiber optic connectors to complete this portion of the project.

OHSU opted for a Vocera wireless system, which Dynalectric also installed. For this portion, the company provided, installed and certified one Category 6 cable from the floor, serving the telecommunications room to 160 access point locations.

Further expanding the voice capabilities of the facility was a Bogan overhead paging system. To enhance this system, Dynalectric installed 30,000 feet of 18-2 plenum speaker wire. In addition, the contractor installed 275 ceiling speakers throughout the facility to enhance total sound functionality.

In today’s healthcare environment, no facility would be complete without enhanced security capabilities, and the OHSU facility was no different. For starters, Dynalectric installed and ran to 102 locations throughout the facility a CATV System with 15,000 feet of RG-6 plenum cable.

From that point, the contractor connected 147 access doors and 57 remote readers to the system as well as 65 dome and pan-tilt-zoom cameras in addition to 27 digital video recorders. Dynalectric installed approximately 36 access control panels, as well, to support all door and elevator control systems.

“This project was a complicated one; as with all hospital projects, diligent coordination between trades was necessary to have things run smoothly,” said Moyle. Dynalectric teamed with subcontractor Dryer Electric Inc., also of Portland, for portions of the project.

As with most hospital projects, the scope of work was constantly changing, to the degree that the electrical contract nearly doubled. On the teledata side, the original contract increased by nearly 40 percent.

One other interesting and unique component of the project revolved around MRI magnets.

“The MRI magnets housed within the facility, some of the biggest in the world, could only be without power for limited amounts of time and had to be energized once set,” Moyle said. This meant the Dynalectric team needed to be precise in terms of scheduling and project coordination.

Dynalectric continues to enjoy a presence at OHSU, and based on the turnout of the work it has done at the facility, the two Oregon partners will move forward together.

STONG-MICHAS, a freelance writer, lives in central Pennsylvania. She can be reached via e-mail at [email protected].