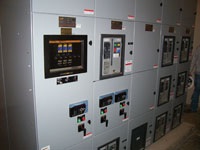 Memphis-based T.A.M. Electric Co. isn’t singing the blues about healthcare. The electrical contractor has successfully specialized in hospital work for three decades, seeing technology grow with the times. Premier hospital foundations, such as Baptist Memorial Health Care in Southaven, Miss., offer T.A.M. both high- and low-voltage work and now provide better communications, tracking and automated systems for the facility and its patients.

T.A.M. recently completed an expansion of services at Baptist Memorial Hospital (BMH)-DeSoto, where a wireless nurse call system is just one of many new technologies deployed. The hospital doubled in size with construction that began in 2004; the new 11-story hospital tower now has an additional 400,000 square feet; an increased number of total beds (339), allowing it to offer all private rooms; a new and larger emergency department; additional operating suites; and space for future expansion. It also offers an outpatient diagnostic center, women’s center, critical care unit with open-heart surgery and a radiation/oncology center.

BMH-DeSoto employs approximately 1,100 and admits about 1,000 patients each month. In fiscal year 2006, it had 39,700 emergency room visits and 1,800 births. The facility provides those patients with 240 acute care beds, 30 physical rehabilitation beds, 20 ICU beds and 33 delivery beds.

The $175-million expansion, under the direction of general contractor Bovis Lend Lease, Nashville, Tenn., added 100 critical- and acute-care beds for the community’s growing population. Located on a 180-acre tract of land a few miles from the Tennessee state line, BMH-DeSoto originally opened in 1988 and since then has experienced quite a history in the growing county. With the recent expansion completed in December 2006, renovation is occurring on about 100,000 square feet of space within the hospital, which includes the areas where the emergency department and rehabilitation services reside.

In July 2003, Mississippi approved BMH-DeSoto’s $175-million certificate of need, the largest ever filed in the state’s history. With the addition of the tower wing, the hospital intended to offer more space for patients and better services.

Bovis Lend Lease began demolition of a former parking area for the new tower, which would be located near the existing emergency room. “It was one big staging area,” said Paul Moffat, Bovis Lend Lease project executive. Because that staging area would be at the front door of the hospital, it required careful coordination to keep entrances and exits clear.

“We had lots of scenarios to keep the access. Our biggest challenge was not interfering with their day-to-day operations, especially the emergency room,” Moffat said. “That required lots of planning.”

T.A.M. Electric Co. Inc. opened for business in 1973, and four years later, the company began its first project for BMH, then a 400-bed, full-service hospital in Memphis, Tenn.

“We continued to work for Baptist and expanded to wherever the need was within their system,” said Tommy Migliaccio, T.A.M. president. “We performed many additions to the BMH-Memphis facility in the mid-1980s and have continually kept men at this facility year round.”

BMH-DeSoto was about a $14-million electrical project, Migliaccio said, and the renovation in the existing building was $3 million.

“We did the entire contract, not subcontracting any work, including the fire alarm system and emergency power system [and the] wireless communication system,” he said. T.A.M. decided to take on the communication system as well. “This was new technology, and we wanted to install it to learn,” Migliaccio said.

BMH-DeSoto needed a wireless system that would help integrate and distribute data for nurse-paging systems and mobile computers with the capacity to provide cellular service. “We needed to have an inner wireless system installed specifically for clinical documentation,” said Richard Kenneth (Ken) Kirkpatrick, BMH-DeSoto’s director of construction.

Similar wireless systems, he said, have gone into most of their facilities. “A wireless system allows the staff to use mobile computers. In my opinion, that’s the direction most hospitals are going,” he said. “It also helps with internal paging and radio communications.”

T.A.M.’s task was to install a distributed antenna system with a frequency of 400 to 2,500 MHz to bring those wireless applications inside the buildings. The system integrates into carrier base stations, such as telecommunication rooms, and provides a reliable system for inside wireless coverage. The numerous telecommunications rooms tie back to one central location in the hospital and include paging, nurse call, monitoring and maintenance on the one antenna system, said David Greer, T.A.M. project manager for low-voltage installation.

To make this work, T.A.M. ran a copper tubing/antenna system, including a riser trunk from the basement level of the hospital up to the top floor with runoffs from that tubing around each floor. The radiating cables that run off the risers bring telecommunications systems to hospital staff via a wireless portal, Greer said.

On the top floor of the bed tower, T.A.M. installed normal and emergency power switchgear that powers the mechanical air units for the building. Workers connected variable frequency drives and pumps for all the HVAC system for the building.

“A lot of building automation low-voltage controls associated with all this equipment is up there, too,” Migliaccio said.

In addition to low-voltage services, the new hospital tower comes with three 1,000 kW/1,250 kVA generator sets installed with space for a future 1,000 kW/1,250 kVA unit, said Jeff Sullivan, senior electrical engineer, Phoenix Design Group. They are each connected to synchronization gear from which the emergency side of each automatic transfer switch (ATS) is served; two 1,600 amp, one 2,000 amp, one 600 amp and one 200 amp. The ATS switches distribute emergency power to various systems in the building.

BMH-DeSoto’s expansion was complete at the end of 2006, and patients were immediately brought into the new tower. With that movement complete, the existing facility’s renovation could start. The project consists of three parts: utility connection, renovation to radiology and renovation to the administration offices.

With all the patients in the new tower, Kirkpatrick said, almost all patient activity is removed from the old facility. Luckily, T.A.M. has expertise in creating a clean work site that doesn’t contaminate medical care underway around them.

Getting done on time was a challenge, in part because of weather-causing delays in which heavy rain filled trenches at the construction site. “All jobs are challenging due to the aggressive schedules,” Migliaccio said. But the greatest challenge was staying in budget when steel and copper prices were soaring.

The renovation portion of the project is expected to finish at the end of 2007. “The project will last one year, and we will continue to have men maintain this facility as we have the last 10 years,” Migliaccio said.  EC