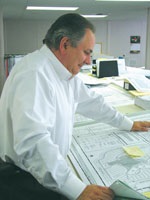 Hollywood! Stars! Fame! Those three words aren’t usually uttered when talk turns to electrical contracting jobs, but there is an exception—SASCO Electric; the three words are inextricably entwined in one of the most challenging and unique jobs that the largest privately held electrical contracting firm in the United States completed late last year as part of the renovation, restoration and expansion of Los Angeles’ famed Griffith Observatory.

The landmark Art Deco building, which first opened its window to the stars in 1935, presented a unique challenge in having to meld the old structure with a new subterranean building, while at the same time preserving and renovating the original observatory. Adding to the challenge were the many detailed and specific work requirements imposed to preserve the existing building and avoid damage to it, the surprises the old structure held for SASCO workers, the lengths they had to go to in both buildings to do the demanding job, and the necessity in many cases to tackle the work out of sequence.

The 71-year-old Hollywood Hills observatory, which offers views of the stars through its 12-inch telescope and planetarium shows, has drawn nearly 70 million people up a winding park road to its scenic location on Mt. Hollywood, more than 1,100 feet above sea level. But by 2002, the famed landmark—which played a starring role half a century ago in the James Dean film, “Rebel Without a Cause,” as well as in many movies and TV shows since—was starting to show its age from the wear and tear of 2 million visitors a year wandering through the imposing building.

To ensure its continued use and future enjoyment, the Los Angeles Parks and Recreation Department, which owns and operates the free municipal facility, closed Griffith Observatory that year to make way for a nearly five-year program to renovate, restore and upgrade it at a cost of $93 million. The project included more than doubling the facility’s space from 27,000 square feet to 67,000 square feet by adding a new building beneath its grassy forecourt.

West Coast-based SASCO, with 3,500 employees and seven offices stretching from Seattle, Wash., to Southern California, received the $5 million contract for the electrical portion of the job. Initially, when SASCO began work in March 2003, it focused on the historic observatory, starting with the removal of existing electrical fixtures that were to be refurbished. The utmost care was required every step of the way.

Dave Kowalski, senior project manager in SASCO’s Cerritos office in the Los Angeles area, who oversaw the project, said every lighting fixture that had to be restored had its own specifications on how it should be taken down, wrapped, restored, rewrapped and stored for reinstallation. Once removed, he continued, the lighting fixtures were sent back to the original manufacturer, C.W. Cole & Co. of Los Angeles, to do the work, which included converting them from incandescent to fluorescent.

An additional step required having each of the approximately 200 refurbished fixtures at Cole inspected to see that they met Underwriters Laboratories specifications. Then they were given individual serial numbers so that they could be traced back if needed. For those fixtures that could not be removed, the refurbishing and UL inspection and numbering were done on-site.

John Baaska, SASCO foreman on the job, said the challenging attention to detail went even further. He said that as each fixture was pulled out, a photo was taken of how it was taken out and what condition it was in when it was removed.

“And,” Kowalski said, “it had to get installed in the exact same place that it came out of. So if there were 12 fixtures that were identical, they had to come out, get tagged, and they had to go back in the same exact spot.”

But that was only one of many challenges in the observatory project with its particular requirements. Much of the building was still laced with the original 1930s fuse-protected tar- and cloth-covered wires, which had to be removed before the building could be rewired. In addition, new conduits had to be run, with the strict requirement to avoid any damage to the marble, architectural flourishes and irreplaceable murals.

“We did extensive work investigating existing conduits to reroute power,” Baaska said. “Then we would have to pick up conduits and reroute them and repull through them.” This presented another unique situation. The three-domed observatory has round walls in parts of the structure, Baaska said, but underneath “the building, it’s very angular.” As a result, SASCO would sometimes encounter an unwanted surprise.

“You would put a conduit through a wall,” he said, “only to find out that it came out in kind of a different spot than you thought it would come out.”

Occasionally, it wouldn’t come out at all. Baaska said the general contractor had the responsibility for making all the openings in the walls for SASCO, and the contractor and the electricians never knew what they would discover hidden behind or in the walls. At times, they unexpectedly found the way blocked when they encountered the structural framework with an unusual configuration as was done in the early 1930s, which did not correspond to the way things are normally constructed today.

As a result, sometimes, the normal 90-degree conduit bends could not be used, and each run had to be approached differently. Sometimes, Baaska said, it required 65 or 85 degrees to get from here to there.

Adding to the challenge, Friends of the Observatory (FOTO), a private support group, had not finalized all of its exhibit plans by the time construction started. It wasn’t until work was well under way or, in some cases, had been completed that FOTO came up with specifics.

“Then they’d issue us a change based on that,” Baaska said. “Then they went through it again and maybe figured out that it doesn’t quite work, and then we’d change it again. In the meantime, every time you have a change, we have the original marble floors and stuff to be careful not to damage.”

Inside the observatory, access proved problematic. The foreman said in one part of the building, there is no attic, and only a small man could make it through the tight space. Sometimes, he added, conduit size had to be reduced in order to install a run that could fit.

Outside the observatory, the expansion project was going on simultaneously, as construction crews dug down 30 feet in front of the observatory, making space for the subterranean building. The main features of the underground building are the Leonard Nimoy Event Horizon Theater; the Cosmic Connection, a passageway with a 150-foot timeline of the universe; and more exhibits, a gift shop and a cafe.

An uncommon aspect of the underground structure and the old building was that each had its own architect. Brenda A. Levin of Levin & Associates Architects was responsible for the renovation of the observatory, while Stephen Johnson of Pfeiffer Partners Inc. designed the subterranean building. S.J. Amoroso was the general construction contractor.

Kowalski said construction of the subterranean building, which now lays hidden beneath the observatory’s front lawn, carried its own unique challenges. Among them were the need for precise placement of conduits, fixture locations and other installations prior to concrete pours, after which there would be an extremely long delay before SASCO would resume work on them.

“Everything in this area in the upper ceiling was all poured in place,” Kowalski said. “And then it sat there for two years until we got back to finishing it out.”

The senior project manager said that during the two-year delay, some of the embedded conduits were no longer needed and abandoned because of plan changes, while others were reused for different purposes then originally planned. He said SASCO had to improvise wall routing when new conduits were needed in the area.

Baaska said SASCO anticipated difficulties in getting rented scissor lifts down 30 feet into the construction area where they would be needed, so the equipment was lowered in place early in the work. He said it was also necessary to bring in riggers to lower a transformer into an electric room because there was no possibility of muscling it down a stairwell, and a crane could not reach the location.

If access presented a challenge, so did electric rooms, because the normal sequence of installing an electrical system could not be followed. Baaska said, “Normally, you build your electric rooms first, and you go out from them. Well, our electric rooms were built last.”

Kowalski said the situation had a lot to do with structural modifications and the way the project was built. He said tying in the work with the electric rooms was similar to putting a jigsaw puzzle together.

The entire project required approximately 20 SASCO employees at the height of the work, which was completed last September. During the course of the work, SASCO installed 244,000 feet of conduit, 789,000 feet of cable, 1,500 light fixtures, one 250-kilowatt generator, four new services, 15 transformers and 48 panel boards.

To help make it all fit and tied together, SASCO had one man detailing the job for more than a year because of the many plan changes.

“Basically,” Kowalski said, “all he did was detail portions of the project. How to get from point to point. How to make it fit.”

Looking back on the unique and exceptional project, Kowalski said, “It was an interesting job. It’s something no one else is ever going to be able to do. There aren’t that many observatories around, and there certainly aren’t that many historic renovations of observatories, so it’s a once-in-a-lifetime project.

MAZUR is a freelance writer, based in Los Angeles. He can be contacted at [email protected].

Morrie Mazur is a freelance writer based in Los Angeles and can be contacted at [email protected].