'Snakes' in the Water Could Help Wave Energy 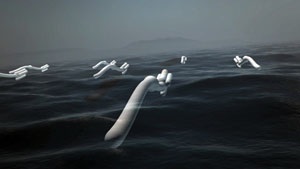 A device consisting of a giant rubber tube may hold the key to producing affordable electricity from the energy in sea waves. Invented in the United Kingdom, the “Anaconda” is a totally innovative wave energy concept. Its ultra-simple design means it would be cheap to manufacture and maintain, enabling it to produce clean electricity at lower costs than other types of wave energy converters. Cost has been a key barrier to deployment of such converters to date.

Named after the snake because of its long, thin shape, the Anaconda is closed at both ends and filled completely with water. It is designed to be anchored just below the sea’s surface, with one end facing the oncoming waves. A wave hitting the end squeezes it and causes a “bulge wave”—a wave of pressure produced when a fluid oscillates forward and backward inside a tube—to form inside the tube. As the bulge wave runs through the tube, the initial sea wave that caused it runs along the outside of the tube at the same speed, squeezing the tube more and more and causing the bulge wave to get increasingly bigger. The bulge wave then turns a turbine fitted at the far end of the device, and the power produced is fed to shore through a cable.

Because it is made of rubber, the Anaconda is much lighter than other wave energy devices (which are primarily made of metal) and dispenses with the need for hydraulic rams, hinges and articulated joints. This reduces capital and maintenance costs and scope for breakdowns.

The Anaconda is, however, still at an early stage of development. The concept has been proven only at the small laboratory scale, so important questions about its potential performance still need to be answered. Engineers at the University of Southampton in England are currently conducting larger-scale laboratory experiments and novel mathematical studies that they hope will answer those performance questions.

Each full-scale Anaconda device would be 200 meters long and 7 meters in diameter. They will be deployed in water depths of between 40 and 100 meters. Initial assessments indicate the Anaconda would be rated at a power output of 1 megawatt, roughly the electricity consumption of 2,000 houses. Although around twice as much as the cost of electricity generated from traditional coal-fired power stations, this compares favorably with generation costs for other leading wave energy concepts.

“The Anaconda could make a valuable contribution to environmental protection by encouraging the use of wave power,” said Professor John Chaplin, who is leading the project. “A one-third scale model of the Anaconda could be built next year for sea testing, and we could see the first full-size device deployed off the British. coast in around five years’ time.”