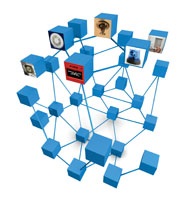 While fire alarms can be integrated with other building systems, they are tightly governed by codes and standards, such as NFPA 72, NFPA 70, UL864, etc., since these systems directly affect life safety.

According to the National Fire Alarm Code, NFPA 72, a true fire alarm system has three parts, which not only have different functions but are physically separate. Each function can be implemented by a variety of different types of devices. The system consists of the following:

• “Initiating device: A system component that originates transmission of a change-of-state condition, such as in a smoke detector, manual fire alarm box, or supervisory switch.” (3.3.89) [Note: all numbered references are to the 2007 edition of NFPA 72.]

• “Fire Alarm Control Unit: A component of the fire alarm system, provided with primary and secondary power sources, which receives signals from initiating devices or other fire alarm control units, and processes these signals in order to determine part or all of the required fire alarm system output function(s).” (3.3.64)

• Output functions: There is a very wide range of output functions, which can be used to activate various types of warning devices, such as bells, horns, lights, speech, text. They can activate a fire suppression device, such as a sprinkler system; transmit a notification to a central monitoring station and/or to a fire department; and transmit emergency commands to other systems, such as elevators, door locks, HVAC dampers and emergency lighting.

“Automatic and manual initiating devices shall contribute to life safety, fire protection, and property conservation by providing a reliable means to signal other equipment arranged to monitor the initiating devices and to initiate a response to those signals.” (5.2)

The simplest initiating device is a manual pull box activated by a person who sees a fire. Others include smoke detectors, heat detectors and the following:

• Radiant energy detector, which is defined in 5.8.1.2 as “… fire detectors that sense the radiant energy produced by burning substances. These detectors shall be categorized as flame detectors and spark/ember detectors.”

• Water flow switch, which indicates that water has started to flow in a sprinkler system, initiated by a heat-sensing element built into the sprinkler head.

• Detectors that note the operation of other automatic extinguishing systems. (5.12)

• Supervisory signal-initiating devices (5.15) are switch inputs that monitor the readiness of fire suppression and detection devices.

• “Smoke Detectors for Control of Smoke Spread” (5.16), which are smoke detectors designed to sense smoke in chambers that involve air circulation, such as ducts and plenums.

In an addressable panel, each input device has a unique identifier. The panel reads that information and responds to it with a preprogrammed series of output events designed to deal with the specific type and location of signal initiator. Input and output signals can be transmitted over a single pair of wires, since each device is uniquely identified by a programmed code. NFPA 72, 3.3.173 calls this kind of connection a signaling line circuit: “A circuit path between any combination of addressable appliances or devices, circuit interfaces, control units or transmitters over which multiple system input signals or output signals or both are carried.”

If an alarm is triggered by a particular smoke detector, audible and visual alarms can go off and, at the same time, dampers, fan controls, smoke doors and fire doors in the HVAC system should prevent the flow of smoke from entering unaffected areas. Fire doors might be locked to prevent the spread of the fire, or security doors might be unlocked to permit people to evacuate and/or fire fighters to enter. Since it is possible to know the location of the sensor that triggers an alarm, one can activate a voice message to instruct occupants to move away from that location. Exit marking notification appliances (3.3.113.1.1) are used to mark viable exits by emitting a series of sounds that can be traced and even provide verbal instructions on what action to take, such as “stairs up,” “stairs down,” “area of refuge” and “exit here.”

NFPA 72, in fact, requires fire alarm systems to be integrated with other building systems. For example, the elevator might automatically be switched into firefighters’ recall mode or be sent to an alternate floor. The elevator might be shut down completely prior to automatically activating sprinklers. All these actions and interactions can be programmed locally or remotely in the FACP.

The integration of fire alarm systems with other building systems is rapidly evolving. Specific regulations govern their installation, but the techniques are similar to the typical work of electrical contractors. Furthermore, the regulations clearly specify the required procedures.

BROWN is an electrical engineer, technical writer and editor. He serves as managing editor for SECURITY + LIFE SAFETY SYSTEMS magazine. For many years, he designed high-power electronics systems for industry, research laboratories and government. Reach him at [email protected]