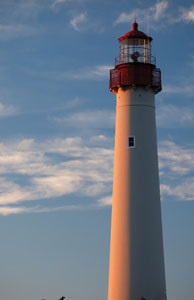 Cape May County lies along a 30-mile ribbon of clean, white sandy beaches on the Atlantic Ocean. New Jersey’s southernmost county takes its name from the 20-mile long peninsula that extends southwest along the Atlantic coast into the Delaware Bay.

The 14,000 school-age children of the county’s 100,000 permanent residents attend a patchwork of 16 independent public school districts, each with its own local school board. Several of the districts are as small as a single elementary school building.

Cape May County Technical School, which recently underwent a major expansion and partial renovation, is one of five high schools on the cape. Like many of the county’s schools, the technical school is its own independent local school district, but any student from across the county may apply. The school has about 565 students in its full-time program, which combines a technical program with traditional high school academics. Another 120 shared-time students take technical classes while taking academic classes at their home schools.

In 2005, in response to booming enrollment, the school announced a $14.8 million capital improvement plan, to be funded by the Cape May County Board of Freeholders, with 43 percent to be reimbursed by Debt Service Aid from the state of New Jersey. It included additions totaling 46,317 square feet, plus a 7,425-square-foot renovation within the existing 188,475-square-foot building. The first shovel was turned in 2006, and the project was to be completed for the 2007–2008 school year.

William Desmond, who was school superintendent when the expansion was announced, explained the strategy: “Since tourism is a major part of our industry, there aren’t a lot of varied occupations here. But we try to give them occupations they can find employment in. The construction trades are offered here. We’re looking at expanding them.”

To that end, the expansion added a new masonry classroom near other building trades classrooms.

There also is a new auxiliary gymnasium, with locker rooms and weight and exercise rooms, and space was added to create an early childhood education classroom.

The school acted as its own general contractor for the project, so each section contractor was a prime contractor. The electrical prime was G.M. White Electrical Contractor Inc., Vineland, N.J. The company was started in 1992 by Greg White, and he now jointly owns it with Mike Vizzard, who has worked for the company for 12 of its 15 years. Staff size ranges between 26–90 members, with annual revenues of around $8 million.

“This project started slowly for us,” said Pepi Dragotta, G.M. White Electrical project manager and estimator, “and there was a lot of concern about the schedule.”

The plan was to build the new construction during the 2006–2007 school year and then renovate the existing areas once the students left for summer.

Dragotta and his team could see before they began there was likely to be a crunch to complete everything on time. The solution in this single-story school was to be proactive and not wait until the pressure was on.

“We decided to run our conduits underground before the concrete was poured. We ran 15,000 feet of conduit so that we didn’t have to wait until the end to put all of that in. That way we stayed ahead of all of the other trades, with no one ever playing catch up.

“At the end, the only overhead work that we had left to do was hanging fixtures. That meant that we had to partner closely with the masons. And we lost a few conduits, but not many. It kept our crews busy early in the project, and we ended up saving a lot of labor hours,” Dragotta said.

“We also used Leviton prewired electrical receptacles, which saved us time stripping and splicing wires at the end of the project,” Dragotta said.

But just because the company planned ahead and worked effectively on the new construction portion did not mean the short time in the renovated areas would necessarily be easy.

“With only two months to complete the renovations, that portion of the project was extremely difficult for us,” Dragotta said. “We were needed for the demolition work right at first, but then we had to get out of the way and come back in last. We had the toughest job of all.

“All of the trades were in there together during the renovation, but we had good communication throughout, with no finger pointing. Everyone just worked together to get the project done. We had extensive meetings with the engineer on-site and made multiple walk-throughs. There was a lot of give and take in the dialog, and we made a lot of on-site decisions together. They really respected the expertise and experience that we brought to the project. Everything was functioning by the start of school in the fall except for the gym, which opened in October,” Dragotta said.

Throughout the project, G.M. White kept about seven or eight staff members on the project, though that swelled on occasion to 15. The crew installed 32 electrical panels, ranging from 60–400 amps, which included replacing all existing panels in the renovated areas. The crew also installed 13 new electrical transformers.

All new classrooms were wired with dual-level lighting to aid the teaching process, as there are times when dimmed lights are more useful than having classroom lights simply on or off. Classrooms also were wired with shunt trip relays tied to the emergency backup lighting system. In case of a power outage, the shunt overrides the classroom switch settings (be they on or off), and every classroom is automatically illuminated with at least partial lighting. G.M. White also provided and installed a Detroit Diesel 60-kilowatt backup generator for the new science wing.

Another system was for stage lighting and dimming in the new gymnasium. G.M. White Electrical installed stage lighting fixtures by Barbizon and a dimming control system by Electronics Diversified Inc. The sound system in the school’s gymnasium—used during school basketball games, pep rallies, etc.—also needed replacing. G.M. White Electrical partnered with local contractor Arsenal Sound LLC on that portion and replaced the amplifier, tuner, cassette player, microphone jacks and speakers with new devices by Bogen. The company was able to reuse the existing audio cabling.

In addition to the traditional electrical work, G.M. White Electrical stubbed in the conduit and termination boxes for the telephone and computer cabling and was responsible for most of the low-voltage systems.

While that change cost a bit more in wire and labor, it resulted in a better, more precise system. The new panel is able to identify exactly which sensor has sounded an alarm, while the old panel was able to identify only which wing had reported. The building team decided the better system was worth the modest added cost. G.M. White Electrical installed all fire alarm system wiring and devices, and the Franklin Alarm Co. Inc. programmed, certified and now monitors the system.

When asked what he would change about how things went, project manager Pepi Dragotta said, “You know how it is when you are low bid on a project. You’re kind of happy-sad. You’re happy because you won the project, but you hope that you were not too low to get the job done right. In order to be successful on a job, you need three things: good coordination, successful buy-outs of products through good planning, and a foreman who is a go-getter, working with a crew who will get the job done.

“We had all three of those on this project, so I am not sure if I would change anything,” Dragotta said.

MUNYAN is a freelance writer in the Kansas City, Kan., area, specializing in business writing and telecommunications. He can be reached at www.russwrites.com.

Russ Munyan is a freelance writer in Olathe, Kan., specializing in technical and business writing. He can be reached at www.russwrites.com