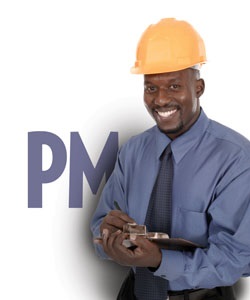 There is a special type of project—one that doesn’t come along every day—that requires the full-time presence and undivided attention of a permanent on-site project manager (PM). Electrical contractors who have done this sort of work agree that the key to success on this type of job is precisely matching the correct manager with the project.

Generally speaking, these are large, high-cost, complex jobs that are time-sensitive and long in duration, involving the interaction and coordination of an extensive interdisciplinary work force.

The manager who takes the field and keeps the project moving has to wear a variety of hardhats because he is specifically tasked with oversight of the electrical/electronic aspects of the operation and is embedded on-location for the life of the project, whether for months or years.

For the most part, jobs that necessitate and justify the presence of a permanent PM include industrial plant maintenance and renovation, public works infrastructure projects, and commercial and institutional construction, such as intelligent office buildings, data communications centers and hospitals.

Moving in and staying a while

One of the longest running contractual arrangements on record involving the ongoing services of a permanent PM has been in place since 1994. Placer Electric Inc., Citrus Heights, Calif., has had a continuous succession of PMs on duty at the NEC Electronics America Inc. microchip manufacturing plant in nearby Roseville for 14 years.

The facility is a major supplier of microprocessors to the automotive industry, so production cycles vary. When demand is strong, adjustments have to be made to increase the facility’s capacity. The Placer Electric presence on-site—including PM, support managers and electricians—can be as many as 90 people when production is in high gear. Over the course of a year, there is an average of at least 20 of these people working in the plant.

“As in every situation, the on-site PM has to have an in-depth understanding of the relevant protocols that distinguish the project,” said Dick Nogleberg, president of Placer Electric. “In this case, he has to have an extensive knowledge of manufacturing in a clean room environment, making sure our electricians are properly garbed in their sterile ‘spacesuits’ and that all their tools have been cleansed with alcohol before entry into the workspace. Some of our special equipment stays inside on a virtually permanent basis to avoid contamination.”

One of the byproducts of the presence of Placer at the NEC plant, Nogleberg said, has been the development of a close relationship, since the contractor has been continuously involved in facilitating the refitting and retooling for the manufacturer’s makeover into a global microprocessor source.

Placer also continues to work on shorter term projects involving the presence of a permanent PM, usually running from six months to a year. Periodically, the company has worked with Verizon, and here, again, Nogleberg stressed the need for awareness of the project’s unique requirements because critical judgment calls have to be made on the spot.

“The PM’s sensitivity to the particular industry’s applications and procedures is absolutely essential,” he said. “When you’re putting in backup power for a phone company, you can’t cause a failure and have them lose their dial tone, so the PM has to do a tremendous amount of preparation in order to be able to direct work in a highly sophisticated venue.”

Powering up the runway

The ongoing $6.6 billion O’Hare Modernization Program (OMP), which began in 2001, qualifies as a large, high-cost, complex job. It entails construction and renovation work on, under and around the runways of the world’s second-busiest airport, serving 77 million passengers per year. And to accommodate traffic patterns, roughly 20 percent of all project work and 100 percent of the runway lighting aspects of the job have to be done after nightfall. For more about this project, see page 86 in the SECURITY + LIFE SAFETY SYSTEMS section.

Divane Bros. Electric Co., Franklin Park, Ill., is the prime electrical contractor on a segment of the OMP that entails building a vault that will contain the power and control equipment for all the lighting on the southern half of the airfield. This includes a 4,000-square-foot above-ground structure and more than a mile of duct bank underground. Work started in August 2006 and is scheduled to be completed in the summer of 2008.

“Because of the scope of the work, and the fact that we are charged with a number of disciplines, we have eight to 10 subcontractors working with us at any given time,” said Mike Maicke, Divane vice president. “We have seven managers and, depending on what’s going on, anywhere from 12 to 35 electricians out there. Somebody has to corral this rodeo, and that’s what the lead PM is tasked with managing our own people, responding to information requests from the multiple subs and keeping the project moving ahead on time.”

Another crucial role the PM plays is maintaining liaison with the home office. There is a temporary office built on the airfield adjacent to the vault, and this is linked to company headquarters by computer and cell phone. Monthly meetings are held at the site to review the project’s progress.

“The PM and his people need to continually educate the home office on what the realities are in the field and what’s coming up, so that we can help keep them focused on where we think things should be going,” Maicke said.

Maicke said the PM on a job such as this must be a decision-maker who doesn’t need much coaching, should be comfortable with delegating responsibilities on a multifaceted job and must possess exceptional communications skills because he’s dealing with other prime contractors.

“He has to have a high degree of professionalism and political savvy,” Maicke said, “because he’s working with some major industry players in one of the higher profile projects our company has ever been involved with.”

Scrambling in the dark

The company is working simultaneously on two projects, the first being a site-duct-bank package involving conduit and manholes for running the lighting on a new runway on the south end of the airport. The second, on the north end of the field, is the installation of three radar buildings and fiber optic loops that will tie these facilities to the old and new control towers, using approximately 240,000 feet of fiber optic cable and 400,000 feet of innerduct.

“This is a fast-paced, highly complicated project with more difficult and onerous rules, regulations and related paperwork on the municipal and federal levels than is usual,” said Mike Sugrue, project executive at Gibson Electric. “Compliance with all of these requirements is yet one more burden of responsibility for the on-site PM.”

The company has eight managers at the airport site, led by the senior PM who must not only read plans and understand specs, but be able to make decisions out in the field that can directly affect the bottom line.

“Along with oversight and scheduling, dealing with other contractors and coping with change orders,” Sugrue said, “the PM has to be prepared to meet with the OMP people at the drop of a hat and to have the authority to talk dollars and cents and to deploy the manpower on the spot as needed.”

And to a large extent, the PM is doing all of this after dark. Sugrue described a night in the life of an on-site PM at O’Hare:

The senior PM and his managers typically meet with the airport operations staff at 9 p.m. for a final review of what is going to be done that night, where the work will take place, how many safety barricades will be needed and what specialized equipment will be required.

At 10 p.m., the PM, managing staff and from 15 to 30 electricians pass through the security gate and are met by an escort that drives them to that night’s location on the field. But it’s rare that this clearance procedure takes place expeditiously because, often, the control tower is waiting for an overdue flight, so the team isn’t in place and working until close to midnight.

“But the PM’s worries are by no means over at this point,” Sugrue said. “He has to get the work done and has to start pulling his team and equipment off the runway by 5:15 a.m. because at 6 o’clock, liquidated damages start at $10,000 a minute.”

From drawing board to job site

The dedicated on-site PM is always in demand, pulled in many directions at the same time, basically because he’s at the hub of most of the activity going on in the field.

“You have to have a permanent PM on any large, long-duration project that requires a lot of interaction with the other trades on the job and with vendors,” said Rick Jamerson, co-president of Jamerson & Bauwens Electrical Contractors Inc., Northbrook, Ill.

The firm has considerable experience in hospital and data center work and, as lead electrical contractor, recently completed construction of the new Prentice Women’s Hospital at Northwestern Memorial Hospital in downtown Chicago.

The PM on the 2½-year project, in addition to his other qualifications, had a background in computer-aided design, developed many of the drawings for the job and then coordinated planning with the other trades, obviating any conflict among the participants on-site. At the same time, he dealt with the vendors of generators, switchgear and building controls to ensure delivery times meshed with construction schedules.

“The culmination of the job was a 24-hour blackout test of the proper functioning of all critical emergency systems in the hospital,” Jamerson said. “Several months of pretesting led up to this, and it could not have been accomplished successfully if the PM wasn’t on-site to troubleshoot things like wiring scheme rearrangements. The blackout test came off without a hitch.”

QUINN reports on a broad range of business and industry issues for journals in the United States and Europe. He can be reached by phone at 203.323.9850 or by e-mail at [email protected].