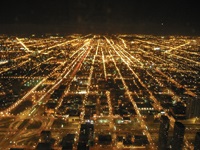 As a child, if I ever wanted an astronomy lesson, all I had to do was step out onto my parents’ driveway and look up. That was one of the benefits of growing up in a rural town, 50 miles away from any urban glow.

But in cities, and a growing number of suburbs across America, that astronomy lesson can only come from a planetarium. As the population expands, so does the circumference of light illuminating our streets, homes and—regrettably—skies.

There are three primary types of light pollution with a varying degree of severity. Urban sky glow, the culmination of all bad lighting in a particular area, is by far the worst. It reduces the contrast in the night sky to the point that even the brightest stars cannot be seen. Not only has it limited the operations of various observatories, it also disrupts the ecosystem, confusing migratory birds, causing species decline in night blooming plants and interfering with sea turtle hatchlings.

Glare is caused by a high contrast in light and dark areas that greatly reduces night visibility. Due to the volume of poorly shielded lights surrounding highways, glare is a major issue in road safety.

Light trespass is the “bad lighting” issue that gets the most attention, according to Richard E. Barton, senior applications specialist, GE Lighting Institute, GE Consumer & Industrial.

“Light trespass is light directed into areas where light isn’t wanted, such as bedroom windows in homes near public parks using sports lighting,” he said. “If a consumer’s house is being bombarded by light, he’s probably going to complain to someone, or take matters into his own hands by installing shades, erecting walls or even bringing his plight to the attention of local media outlets.”

It is a nuisance to people in subdivisions with close proximity to neighboring homes or crowded cities where commercial and residential areas intertwine. Light tresspass contributes to urban sky glow and the resulting excessive light through a bedroom window may cause sleep deprivation.

As an electrical contractor, you have undoubtedly installed outdoor fixtures that waste light; globe lights that shoot light up instead of down, noncutoff ornamental street lighting, wall packs that create glare—the list goes on and on.

One of the worst sinners is also one of the most prevalent fixture used for dusk-to-dawn and security lighting. The 175-watt Mercury fixture represents all aspects of poor outdoor lighting: glare, light trespass, urban sky glow and energy waste.

“We really rail about these glare bombs,” said Susan McGowan, media consultant for the International Dark-Sky Association (IDA). “The 175-watt Mercury fixture throws light in all areas. It doesn’t shield the light, sending it downward instead of up. What is it illuminating? Trees, airplanes?”

IDA estimates that this fixture alone wastes more than $1 billion in energy costs a year, so why keep it around? Does this, or any other traditional security light, deter crime?

It is a widely held belief that with light comes safety. Your customers may feel safer walking to their cars under the glow of street lamps, however, if the lighting is badly planned, it actually helps, rather than hinders, criminals.

“Poorly designed lighting is criminal-friendly lighting. Not only does it create blinding glare, but you can’t see what’s in the dark outside the deep pockets of light,” McGowan said.

Some cities are taking this theory seriously and cutting down on street illumination. According to the Des Moines Register, officials turned off 17 percent of the Iowa city’s 23,376 streetlights in September 2003 due to tight budgets. This put citizens, who assumed crime would skyrocket, in an uproar. However, overall crime dropped 6 percent that year. In 2004, Des Moines saw a 3.5 percent drop in street crime the first four months alone.

IDA’s Dark Campus program is another example. IDA believes by turning out the lights outside schools, you take away a large part of vandalism: the thrill of watching something break. In California, the Cupertino Union School District saw a 29 percent decrease in vandalism after implementing the program. It also reaped energy-saving benefits of more than $8,000 in one school year.

But according to Eric Lind, Lutron Corp.’s director of commercial marketing, while there is little proof that more lighting equates to better security, shutting off the lights entirely isn’t the answer.

“I don’t know if you can really get rid of outdoor lighting,” Lind said. “Most major cities are going to use it as a method of advertising or to bring attention to a venue. On one hand, you want to maintain a nighttime environment, but you still have this booming economy that needs to stay healthy. They’re at odds with each other.”

Lind believes a halfway point needs to be found—one that greatly reduces the amount of wasted energy yet doesn’t negatively affect those trying to run errands after sunset.

According to Lind, dimming outdoor fixtures is one of the best ways to maintain a reasonable amount of light, while still conserving energy. Time-delay lighting controls such as Lutron Electric’s Grafik 5000, 6000 and 7000 provide centralized lighting controls for small and large areas, with zone-adjustable fade times. A built-in astronomic timeclock allows events to be scheduled a year in advance. The systems have various optional operating features, such as automatic sequencing, partitioned space control and automatic daylight control, all designed to conserve energy while maintaining a desirable atmosphere.

“Relay-based systems are a great outdoor solution,” said Lind. “Bi-level switching is also popular, especially for parking lot areas, because they can stay lit, but at a lower level.”

The HS390, an outdoor timer by Safety Technology Internatioal Inc., automatically turns landscape lighting on and off. It is controlled by a photocell, but the timer can be set manually, providing energy-efficient security.

While these systems are the more popular solutions, another effective aspect of outdoor lighting control may have gone overlooked because the control doesn’t take place outside.

“A large portion of the focus is on the fixtures mounted outside of the building, but we believe there is a huge internal light leaking out the building that causes problems,” said Lind.

Another form of light trespass, this unwanted leakage can be eliminated through window treatments, such as the Lutron Sivoia quiet electronic drive (QED) roller shade system.

“Window treatments reduce the amount of light coming from a building. While this is an internal space, because the building is operated at night, light shines from the windows through to the outside,” said Lind.

The Sivoia QED helps banish harsh glare and save energy year round by reducing solar heat buildup in the summer and insulating from the cold during the winter. Users can also obtain up to 22 Leadership in Energy and Environmental Design (LEED) credits by combining Sivoia QED with another Lutron lighting control system.

“Window treatments reduce that fishbowl feeling,” said Lind. “They keep the glass from becoming a mirror and sending glare off the window.”

While window treatments are helpful for residential buildings, occupancy sensors are a solution for commercial facilities.

A line of vacancy sensors from Cooper Wiring Devices handles incandescent, electronic low-voltage, magnetic low-voltage, fluorescent and compact fluorescent loads. Vacancy-sensing wall switches use passive infrared technology to detect when a room becomes vacant. Once the room is left unoccupied for a user-determined period of time, the light turns off automatically.

For complete occupant-based dimming capabilities in conjunction with on/off lighting control, these occupancy sensors can be integrated with a number of Lutron lighting control systems, enabling sensors to slowly dim lights to off or leave lights on a low level.

As an electrical contractor and installer of the fixtures that contribute to the light pollution problem, you might think there is little you can do. After all, you install what is requested of you, right? Not entirely—contractors have more control than that.

The key is in design-build.

“I think sometimes there is a perception that a contractor is being reactive instead of proactive,” said Lind. “There is a growing trend of design-build contractors. They can be proactive in terms of suggesting light fixtures that have better cutoffs and control systems. It’s about making people aware of higher quality products that might cost more, but are a solution.”

Through design-build, contractors have a say in what goes into a facility and an opportunity to educate owners on new lighting ordinances. New ordinances spring up on a routine basis. Fixtures may need to be replaced in the middle of a process if an ordinance goes into effect.

What’s the biggest thing a contractor can do? As Lind said, “It’s being a part of a team in making design.”

Educating clients is another way to combat the problem. Outside of vocal environmentalists such as the IDA, there seems to be a sense of apathy that surrounds the light pollution issue.

“Many of us are not as affected by it,” said Lind. “I live in a small town, I don’t get all upset because it doesn’t hit me on a regular basis. The issue is how does it change my life? Well, wasted light is wasted energy, and that impacts all of us.”     EC

HAYDEN is a former associate editor for ELECTRICAL CONTRACTOR.

Faith Hayden is a former associate editor for ELECTRICAL CONTRACTOR.