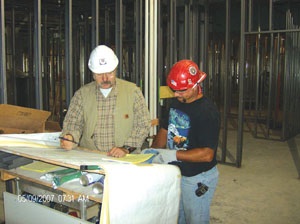 Originally named St Clare College, Cardinal Stritch University was founded in 1937 in Milwaukee by the Sisters of St Francis of Assisi to offer teacher training for nuns; in 1946, the first year laywomen were admitted, it was renamed for Samuel Cardinal Stritch, after a former archbishop of Milwaukee and a friend of the order. Although men were admitted in 1956 to the new graduate division, the undergraduate school remained women-only until 1970.

When a university adopts new programs, it also has to grow the physical plant. In 2005, a $14 million, 90,000-square-foot expansion of the main administration and classroom building, Bonaventure Hall, was completed. The goal of the expansion was to create a state-of-the-art learning environment for students and faculty members, which would better enable Stritch to serve the community. The plan required that the center of the existing building be torn down for subsequent renovation, but first, a wing was to be added to the south side of the building to house additional offices and lecture halls.

“It’s unusual for a project to begin with new construction and end with demolition and renovation,” said Tim Rigsby, president of Uihlein Electric Co., Brookfield, Wis., the electrical contractor chosen for the project.

Because of its decades-long experience with successful installations in educational institutions and its more than 30-year relationship with the Janesville, Wis.-based general contractor, J.P. Cullen and Sons Inc., Uihlein Electric was on the short list of prequalified bidders for the project. Shortly after responding to the design/assist request for proposal, Uihlein Electric’s competitive bid was accepted, and the company began working with Cullen and the architectural firm Zimmerman Architectural Studios to ensure the customer’s needs aligned with the original design specifications.

“Because of our long-term partnerships with both the general contractor and the architect, the design team had confidence in our ability to meet project demands and to provide cost-effective suggestions that would help keep the project on-budget,” Rigsby said.

In fact, most of the changes and improvements offered by Uihlein Electric were incorporated into the design, and the university relied heavily on the company’s expertise in determining how to best manage the complicated project. For example, the original plan called for running five-inch rigid conduit through existing ceilings. However, after Uihlein Electric planned the conduit runs, electricians discovered various obstructions, requiring a complete redesign.

“Uihlein was instrumental in the entire process, from planning though the final construction stages and effectively planned construction with minimum disruption to classes and administrative functions,” said Jack Glynn, vice president for facilities at the school.

The plan for the two-phase new construction and renovation project called for Uihlein Electric to install the fire alarm and power distribution systems, the battery backup power system for emergency egress, and the temperature and lighting controls.

Working with an average of eight electricians and a peak of 12, Uihlein Electric installed more than 200 fire alarm system devices, including pull stations; duct, smoke, and heat detectors; horn strobes; door magnets; sprinkler heads; and tamper and flow switches, using 14-gauge, two-conductor fire alarm wire. The addressable devices that trigger alarms were wired with 18-gauge cable, and all devices were run to the main fire alarm control panel through four notification appliance circuit panels. In addition, one annunciator was installed at the front door of the new wing for firefighters’ use.

The battery backup system designed to light emergency egress paths was the other part of the project’s life safety configuration.

Uihlein Electric suggested the new system include the installation of a single battery rack to be connected to a number of lighting fixtures for emergency egress lighting, which would allow more efficient control and maintenance.

The permitting of the fire alarm system was complicated by the fact that Bonaventure Hall is physically located in two distinct jurisdictions.

“There were actually three authorities until one of them ceded jurisdiction to another, making it possible to require only one electrical inspector,” Fleisner said.

The multiple jurisdictions required that Uihlein Electric take out two separate permits after first determining exactly where the line went through the physical space. Then, when students began attending classes after the addition’s completion, Uihlein Electric and building and fire department inspectors worked together to determine the required temporary emergency egress paths around the center part of the building, which was to be demolished for phase two of the construction.

“It was vital that we ensure faculty and staff safety in the case of an emergency during construction,” Fleisner said.

Power for the project was provided by the local utility’s 24,900-amp electrical service. Uihlein Electric added switchgear to the substation and then distributed the power to the 4,000-amp substation in the main electrical room in the basement of the new addition. From there, the power was transformed to 480-amp, 120/208 volts through eight transformers in six electrical rooms scattered throughout the new building and one in the existing building. Power was finally routed through 20 subpanels for general power and lighting.

With energy costs soaring, managing consumption has become an integral part of any construction project. Bonaventure Hall’s temperature and energy management system required Uihlein Electric to install the wiring for more than 100 variable air volume boxes in classrooms and offices to control the volume of heated or cooled air being pushed through the system. Control wiring also was required for the thermostats, boilers, air-handling units, cabinet heaters and exhaust fans.

Another energy-saving strategy was installing a lighting control system, which included five programmable control panels in the electrical room, with programmable dimming devices. Occupancy sensors in the offices and classrooms and photo sensors for outside applications were installed, so lighting could be automatically switched on only when needed.

During the first phase of construction, Uihlein Electric had to tear out fire alarm wiring from the area scheduled for demolition and reroute it to the new building in order to maintain service in the existing building.

“The original system was installed in the 1960s, so there were no diagrams or drawings, and no one currently working in the school administration or facilities management department knew anything about it,” Driggett said.

Just as the information technology industry had to turn to veteran programmers to rewrite computer code before Y2K, Uihlein Electric turned to Mike Hoppe, one of the company’s more experienced service electricians, who was familiar with the old type of fire alarm system.

“The job required extensive planning and a series of scheduled, short and coordinated shutdowns to test the effectiveness of the rewiring,” Fleisner said.

Another, more physical, challenge was placing the 23,000-pound electrical transformer in the basement. The entryway had a clearance of only two inches on each side and one inch on the top. Project managers and field electricians spent a great deal of time discussing and planning the maneuver before successfully rolling the transformer into place.

As an active participant in the planning and scheduling phases of the project, Uihlein Electric delivered an outstanding project to its customer and strengthened its relationships with the entire construction team.

“Uihlein was integral to the process, responsive to our needs, and willing to work together to improve the design and control costs,” Glynn said.