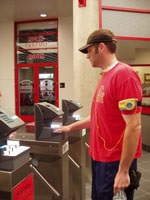 The Department of Homeland Security (DHS) has released some $399 million for critical infrastructure protection. Technology often jump-starts in the government market, as the rest of the industry takes stock of innovation, waiting for the eventual migration to private sectors and other industries.

These grants are being distributed to ports, transit and intercity bus systems to strengthen the nation’s ability to prevent, protect against, respond to and recover from terrorist attacks, major disasters and other emergencies.

All this activity is sure to bring new breakthroughs at a rapid pace, moving quickly to encompass high- to low-risk applications. Indicators of this phenomenon can be seen in most markets. One comparison is the drop in price of microprocessors, surveillance technology, night imaging systems (many from the government sector) and even plasma screens and viewing monitors.

New technologies to detect chemicals and liquid explosives provide a snapshot of market innovation. Following the last liquid explosive terrorist attempt, the United States renewed its efforts to provide even more comprehensive security to vulnerable areas of the country, including seaports, airports, chemical and oil refineries and even major cities and transportation carriers.

The EntryScan portal from GE Security, Bradenton, Fla., is one in a growing list of products designed for explosive detection. The company recently landed a contract for 147 of the “puffer” devices.

Here’s how it works: Passengers step into the portal and puffs of air are released as EntryScan analyzes for traces of explosives in seconds. These units are portable, making it feasible for nearly instant deployment. An EntryScan4 is lower in height and footprint.

Isonics Corp., Columbia, Md., also has a product for these applications. The IMS “sniffer” technology detects explosives such as the substance used by the shoe bomber and the suspected substance in the liquid explosives plot. It is portable and detects traces of homemade explosives and chemical weapons in less than 15 seconds.

Remember when biometric access control was deployed only at high-security and sensitive facilities? That’s changed too, and now these units, many of which originated from government beta test sites, are making their way to more campuses and businesses.

“The primary reason we brought in this device was convenience for students,” said Carolyn McDaniel, assistant director of Student Affairs Business Operations. “The students said they don’t want to bring their card. The Recreation Center is probably the place where cards are most often lost.”

The IR reader has a flat platen with five metal posts embedded in it. When registering, the user places his or her hand on the platen with each finger touching a corresponding post. The reader takes three measurements and saves the average to the student’s account.

Convenience is an important factor with biometrics, said Bashar Masad, marketing manager, IR Security Technologies. “If you wire keypads, you can sell biometrics, and it’s a great way to replace a lock and ‘sell up’ to your customers,” he said.

Portable, multifunction security is the way to go for many deployment environments. Reading cards and credentials in a mobile environment allows you to do more with technology, said Neil Fallon, commercial sales director, Datastrip, Exton, Pa. Datastrip’s built-in-pixel, digital still camera allows users to enroll individuals at remote sites and provide photo-based identity matching of criminal suspects and evidence at crime scenes. Fallon said the small-footprint, portable DSVII weighs a little over two pounds and offers the power of being able to capture images, store them on the Datastrip terminal or wirelessly transmit video for storage and processing at a central control.

“It’s like a small handheld computer, and the camera provides audit trail parameters. It can be used in all types of applications where it is too difficult to get a wired infrastructure,” Fallon said.

Wondering what it all means? The big picture is that security has become a necessity from top to bottom in our society, and certainly, there’s a niche for the electrical contractor.

O’MARA is the president of DLO Communications in Park Ridge, Ill., specializing in low-voltage. She can be reached at 847.384.1916 or [email protected]