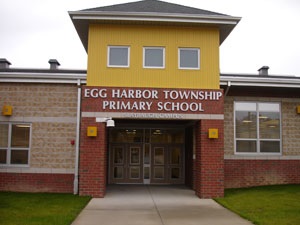 When the board of the Egg Harbor Township School District, N.J., was planning to build two new primary schools last year, it was important to board members that the buildings have less energy impact and the ability to link into a wide area network (WAN) centralized at the district’s high school. The new Slaybaugh and Davenport primary schools would have security and audio/video (A/V) systems that tie into the entire district.

Egg Harbor Twp., a 68.5- square-mile bedroom community in southern New Jersey’s Pine Barrens, is becoming a swelling suburb of Atlantic City. With a growth in school population of 400 students each year, the district has been working on a multiyear project to build more space for those students. Currently at a population of 8,000 students, the district can expect to continue growing at the pace of about 5 percent each year, said Philip W. Heery, school superintendent.

The township was faced with the problem of how to control costs. Energy costs, for example, for operating 10 buildings have been growing. At least part of the solution was to reduce costs for communication among the district’s schools. In 1996, the district installed six FCC-approved antennas to transmit WAN data among the district’s nine schools, which are spread nearly as widely as the town’s borders. With the antennas, the district is able to share its Internet services with all of the schools without incurring monthly communication fees. Not only does this system enable the 3,500 computers in the school district to connect to the Internet, but schools also can share data, such as curriculum material. Already, school districts from around the country have come to see the antennas in action and learn how the system can save them monthly fees and fiber connections. The new Slaybaugh and Davenport schools will become part of that network.

The Davenport and Slaybaugh primary elementary schools are located on the campuses of the existing C.J. Davenport and E.H. Slaybaugh Schools, which had originally housed kindergarten through third grades, but now will need to serve only the two upper grades.

The district found its inspiration for the new schools at a nearby school district in Dennisville, N.J. The connection to that small south shore town was Egg Harbor Twp.’s assistant superintendent, Scott P. McCartney. The elementary school that was built while McCartney was superintendent appealed to Egg Harbor Twp., Heery said.

“We liked its simplistic design and overall functionality,” he said.

The motion-sensor lighting, automatic dimming of lights, high technology in each classroom to assist instruction, and a sophisticated video and surveillance system all were very impressive.

Not only did Egg Harbor Twp. design its own two primary schools based on that Dennisville school, but it plans to continue its future building along the same model.

Green building was another desire of the town. “We had to address concerns with rising energy costs. With the green technology that was available, we found ourselves [planning construction] at the right time to take a look at it,” Heery said.

Each of the new schools has the same basic design: four wings (A, B, C and D) shaped like a plus sign, with the voice/data/video, CCTV and security head-end closets located in the middle where the four wings meet.

The TriComm electricians arrived at both construction sites on March 5, 2006, four electricians altogether, two at each school, to provide voice/data/video, security, CATV and CCTV.

The security systems include digital surveillance with an IP-based system that allows staff as well as police to access images inside the school with a password. And the entrances are equipped with electronic keypads for access. The access control allows the school to track who enters the building and at what time. Altogether, the systems include four security alarm keypads, 13 security card access locations, 14 security door sensor locations, nine security panic bar door locations, emergency exits and 13 security junction box locations—one located at each door in each school. TriComm also installed 30 ceiling-mounted motion sensors with 18/4 and 10/2 stranded copper.

All entrance doors have one drop ceiling-mounted indoor color fixed-dome camera, as well as one motion sensor and GE magnetic door contact sensors, electronic panic bar for the emergency exit, magnetic card access for entry and electronic keypad for the alarm.

Additional indoor color fixed-dome cameras by Honeywell—drop ceiling mounted—and motion sensors are located throughout the rest of the building. Fourteen outdoor color pan, tilt and zoom cameras with heater/blower assemblies are strategically located around the perimeter of the building.

For the CATV system, TriComm installed Leviton voice and data Category 5e cables, Blonder-Tongue amplifiers with both DVD and VHS players, and Commscope plenum coax cables in every classroom. Technicians also built in a total of 16 indoor drop-ceiling-dome, color-fixed cameras, and another 14 outdoor color pan, tilt and zoom cameras in each school. Power distribution was carried over 16/2 stranded copper.

In each classroom, TriComm installed four Cat 5e Leviton data jacks for Internet connection. Since Internet access in each classroom is connected to overhead projectors, teachers can use the Internet in their instruction, and the school can even transmit one program to all classrooms if desired.

At the teacher stations, TriComm installed two more Cat 5e data jacks and an RG6 coax cable connection for video from the head-end, allowing the video to stream to the classroom from the central location at the intersection of all four wings. At each room’s teacher A/V station, TriComm installed four Cat 5e cables for A/V connectivity between the teacher A/V station and the LCD projector mounted in the ceiling, giving the teacher the ability to project a CATV or DVD/VHS signal. The teacher also will be able to project an image or video from the classroom computer via the A/V wiring.

TriComm installed a wall phone in each room with Avaya handsets, with one Cat 5e jack mounted in the Leviton wall phone plate, which is capable of making both outside and internal calls.

Both libraries have two A/V stations, each with two RG6 coax connectors for video and four Cat 5e cables for connectivity between A/V stations and the LCD projector. A/V input comes from the computer output connections and the video head-end. The projector is used to display a CATV signal and for class lessons, using instructional software. For security, there are two indoor, color fixed-dome Honeywell cameras and two Honeywell motion sensors, both drop ceiling-mounted. At the exit door, TriComm added GE magnetic door contact sensors, an electronic panic bar and a magnetic card access for entry.

In the computer lab, TriComm’s crew installed nine student stations with four Cat 5e blue data jacks each, a teacher station with two Cat 5e data jacks and one RG6 coax connector for video from the head-end, a teacher A/V station with four Cat 5e cables for A/V connectivity between the teacher A/V station and the LCD projector mounted in the ceiling. It also installed an Avaya wall phone with one Cat 5e white voice jack mounted in a wall phone plate.

In the gym/multipurpose room, TriComm installed Cat 5e data jacks with two RG6 coax connectors for video from the head-end. As in other rooms, workers installed A/V stations with Cat 5e cables for A/V connectivity—in this case between the A/V station and sound rack on stage. Four microphone jacks also were wired to the sound rack. Two indoor, color fixed-dome cameras—drop-ceiling mounted—can record what happens on the stage or elsewhere in the room. There also are two wall-mounted motion sensors. The exit doors are similar to those leading into the library.

TriComm installed one Hubbell floor box containing a Cat 5e voice jack and a Cat 5e data jack to provide Internet access on stage. This gives performers or lecturers the ability to use video or images from a laptop and project them onto a portable LCD screen.

The most unusual aspect for Leon Cassel, TriComm project manager, was the fact that Cat 5e cabling was used for CCTV video distribution and classroom A/V wiring to the LCD projector. There was a learning curve, Cassel said. In previous installations coax typically was used to transport a video signal for CCTV. Using Cat 5e for CCTV required special attention to installation, to prevent loops or sharp bends in wiring, which could affect signal quality. TriComm accomplished terminations by splicing to specific conductors in the camera and a CCTV termination panel in the head-end.

“In previous A/V installations, coax was typically used for RCA audio and video connections, with coax being soldered directly to connectors,” Cassel said. In this case, using Cat 5e for A/V required audio and video connections by using a 110-style punch-down tool and running 110-style connectivity on the back of the component video, composite video and audio. Altogether, approximately 112,500 feet of blue Cat 5e data cable and 37,500 feet of white Cat 5e voice cable were installed in each school, totaling about 400,000 feet of cable and 1,200 jack locations.

At the Davenport School, TriComm ran about 650 feet of 12-strand MM/12-strand SM fiber from the existing school to the new Davenport School primary, terminated with Seicor Uni-Cam SC connectors on Leviton fiber coupling panels. At Slaybaugh School, technicians put in another 950 feet of 12-strand MM/12-strand fiber, fed from the existing school to Slaybaugh primary. All data and video wiring was run above the ceiling with a Caddy J-hook support system.

“Everything went smoothly,” Cassel said. “That was a credit to the men on the job.” The schools opened after Labor Day as scheduled.

“Our team was very knowledgeable and professional. All the other trades were great to work with. A lot of coordination went into the project,” Cassel said.

“The staff is absolutely happy there,” Heery said of the two schools. “There is a lot to say for an attractive, brightly lit, clean building and what it can do for student achievement as well as faculty satisfaction.”