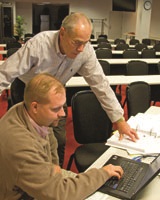 Ferry graduated from high school in 1969 and joined the IBEW Local 573, Warren, Ohio, apprenticeship program, which he completed in 1972. He served 16 years as a journeyman and foreman before joining Valley, Girard, Ohio, as partner/vice president in 1988. At that time, the family-run company focused the bulk of its work in the automotive and manufacturing industry in the area between Youngstown and Cleveland.

In 1990, Ferry bought the company. At the time, it was earning about $4.5 million annually with a dwindling customer base as Ohio’s manufacturing work moved out of the country. Accepting the challenge, he took charge and brought in many of his own relatives, continuing a family tradition at the company.

“This is a family business,” Ferry said.

His wife of 36 years—his high school sweetheart, Mary—is corporate secretary and board member. Ferry has two daughters; Tricia Ferry is head of human resources at Valley, and Rachel Barber serves as accounts receivable manager. His son-in-law Jeff Barber is vice president of the systems integration and technology division.

Since buying the business, Ferry has turned it into a major national player. Today, Valley has 42 office staff members, including engineers, and approximately 130 electricians, which increases to 330 electricians during peak times.

Ferry made several strategic changes that brought on the company’s growth. Valley built a low-voltage division, VEC Systems Integrator, in 2001. In 2003, Valley acquired Evets Electric, Girard, Ohio. Together, these helped bring the company’s revenues from $15–18 million in 2001 to $50 million last year.

Evets Electric is a specialty electrical contractor that works primarily in the natural gas and oil industry. The company undertakes hazardous-location projects, such as gas compressor stations, petroleum plants, refineries, airport fueling stations and fuel storage yards with customers such as Duke Energy and Columbia Gas.

Together, Evets and Valley have focused on gas and oil compressor stations and metering stations as well as refueling stations for military bases, such as Buckley Air Force Base in Colorado and the Marine Corps Air Station, Cherry Point, N.C.

Primarily, Valley continues to serve steel and automotive clients in the Mahoning Valley and Cleveland area and has supplemented its work with installations in hospitals and schools. With Evets, Valley also contributes more industrial work that has taken the company to Colorado, Florida, Pennsylvania, Texas, and up and down the East Coast.

“Our strategy has been continued growth,” Ferry said.

And the growth has been a result of not only smart acquisitions, but of a philosophy that encourages the business to respond to the changing market.

“We’re blessed with a lot of young people here,” he said, adding that it has allowed the company to join the technical and low-voltage arena without much pain.

Within NECA, Ferry served on the local Mahoning Valley Chapter as board member, president and governor before going national as vice president for District 2.

As Ferry begins his three-year term at the helm of NECA, he said the changing climate for the IBEW and NECA will be his focus. He will direct his attention to education and communication as the electrical industry moves forward in a shifting business and technological climate. These goals will help address the large-scale retirement of contractors and electricians, movement into voice/data/video and building automation, and a growing emphasis on sustainable building.

To increase education, he intends to focus on building leadership and training the new generation of contractors, journeymen and apprentices to be leaders. The IBEW faces the loss of millions of workers in the next five years and behind them comes a shortfall. Ferry believes the incoming electrical workers are a vital part of the industry’s future. And he sees a great opportunity to educate future leaders of the electrical industry. Ferry first attended a NECA Future Leaders program meeting in May 2007.

“[It] opened my eyes to how smart all these young people are,” Ferry said.

He intends to support the continuation of this leadership program, whose members include Valley’s Jaskiewicz and Barber. He also plans to go over NECA’s education programs already in place, working with the Management Education Institute.

“I don’t have a college degree myself,” he said. “My experience came from NECA.” He values that experience and wants to ensure other electricians and contractors can have access to the same kind of valuable information.

Communication will be Ferry’s other focus. With this in mind, he said, it is vital that NECA continues its efforts with the Labor Management Cooperation Committee (LMCC).

“I’ve always said a strong LMCC equals more man-hours. That’s what all of us want, whether IBEW or NECA: more man-hours and the opportunity for more man-hours. What we have to do is open the lines of communication to make that our shared priority,” he said.

Ferry said communication will be at the root of improvements for both NECA and the IBEW.

“We’ve got to quit sweating the small details. We have to find ways to negotiate and move forward,” he said.

That, he said, will not happen overnight.

“When I reread NECA’s history recently, I read about codes and standards that we take for granted today but that were major issues back then,” he said.

Those issues were resolved, he pointed out, through a process of negotiation, and without that, it simply doesn’t happen.

“To be a successful businessperson you have to figure out ways to be flexible,” he said.

The industry as a whole is changing, and the skills electrical contractors need to provide are as much about data and security as pulling cable. Like contractors at the turn of the previous century, NECA and the IBEW today must focus on how to start building policy for the future, a future that looks little like the business of 100 years ago.

“The NECA Energy Plan will make our contractors competitive in this growing new field,” he said.

Ferry also hopes to continue increasing membership. In 2006, the executive committee set the membership pledge for a 3 percent increase yearly, which has not yet been fully met. Ferry hopes to boost that membership drive, in part by meeting regularly with local boards and continuing an approach of regular conference calls with NECA chapters throughout the country.

To meet the industry’s changing needs, Ferry believes leadership skills for the next generation of electricians, flexibility among the entire membership, and communication will all be essential. He recalls looking out over the waters of Lake Erie, watching big cargo vessels make their way through the waters. That image, he said, reminds him of NECA and the IBEW.

“We’re a huge ship in the middle of the Great Lakes,” he said.

“What’s fortunate for me is to arrive here at this time,” he said. “We have young people coming in, and they understand we have to do things differently. We’re working with a customer that demands changes, and we are now in the midst of a transition.”

Ferry said the past presidents that have served during his involvement with NECA have all motivated him.

“I have always been impressed with the dedication of the last four NECA presidents,” he said. “Their dedication to NECA and to the industry has always inspired me, and I have every intention of being just as dedicated. I think we all feel we’ve been blessed by the leadership that came before us and by the advantages their efforts have given us. Now it’s my turn to step up and do the right thing for NECA.”

Ferry will continue to work from his Ohio office with visits to the Washington, D.C., area. On average, that will mean 120 to 130 days per year in travel. However, he doesn’t consider himself a workaholic.

“With communication technology today, I can be anywhere,” he said.

In the meantime, he’ll still enjoy traveling with his wife, visiting with his three grandchildren and spending a few hours playing golf.