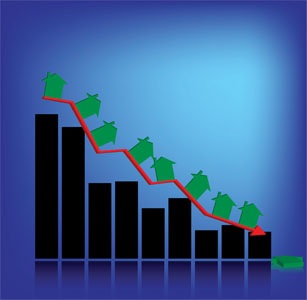 Sales of newly built, single-family homes dipped slightly in June from an upwardly revised pace in May, the U.S. Commerce Department reported. A 0.6 percent decline brought the seasonally adjusted annual rate of new-home sales to 530,000 units for June.

“While the housing downswing continues, with new-home sales down by a third from year-ago levels and builder confidence at a record low this month, today’s report shows that builders are making some progress on reducing the inventory of unsold units,” said David Seiders, National Association of Home Builders (NAHB) chief economist.

Commerce’s report indicated the inventory of new homes for sale eased down 5.3 percent in June to 426,000 units. This represented a 10-month supply at the current sales pace, compared to a 10.4-month supply in May.

Meanwhile, single-family housing starts and permits declined in June. Responding to worsening conditions in the nation’s housing and financial markets, single-family homebuilders continued to slow the pace of new construction.

Starts of new single-family homes declined 5.3 percent to a seasonally adjusted annual rate of 647,000 units in June. This was the slowest pace in 17 years, and it marked a decline of 64.5 percent from the peak of the building boom in January 2006. Meanwhile, issuance of building permits for single-family homes declined 3.5 percent to a rate of 613,000 units.

“Builders continue to do their part to reduce inventories of unsold homes on the market by reining in new construction,” said Sandy Dunn, NAHB president.

“Traffic of prospective buyers is down substantially, and consumer confidence is very low,” Seiders said. “Job-market losses, deepening problems in the finance arena and sinking home values aggravated by the wave of foreclosures are all contributing factors that are keeping potential home buyers on the sidelines.”

Overall, housing starts and building permits posted misleading gains of 9.1 percent and 11.6 percent, to 1.07 million units and 1.09 million units, respectively, for the month, largely due to a one-time bump in multifamily activity that was related to newly instituted building code changes in New York City. Excluding the Northeast multifamily data, there was a 4 percent decrease in overall housing starts and a 0.7 percent gain in building permits for the month.

Furthermore, builder confidence fell to the lowest it

has ever been in July 2008, according to the National Association of Home Builders/Wells Fargo Housing Market Index (HMI). The HMI fell below its previous record low of 18 in June 2008 to a new record low of 16, with each of its three component indices also hitting record lows.

Of course, with all of this bad news about the residential market, there is some good news. President Bush signed The Housing and Economic Recovery Act of 2008 into law. For more details about the act, see page 14.