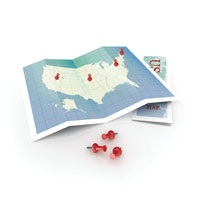 As the national dialogue continues about the uses of alternative power, at least four states have added or increased their requirements on utilities for the production of electricity from renewable sources.

Kansas also is allowing easy interconnection and net metering for customer-owned renewable-energy systems, and those systems can count toward the requirement. Utilities also can meet a portion of the requirement by buying renewable-energy credits. The legislation also requires energy-efficiency standards for state-owned and -leased buildings and sets fuel economy standards for state-owned motor vehicles.

In West Virginia, where coal mining is a major industry, a new credit-based system allows for both renewable energy and mostly coal-based “alternative-energy resources” to meet its new standard. The state requires its electric utilities to hold credits for at least 10 percent of their retail sales by 2015, increasing to 15 percent by 2020 and 25 percent by 2025. Renewable-energy facilities normally earn double credits, but they earn triple credits if the facilities are located on reclaimed surface mines. Customer-owned generators also earn credits that can be sold to the utility, while utilities can earn credits through energy-efficiency and demand-management initiatives as well as projects that reduce or offset greenhouse gases. Eligible renewable-energy resources include solar energy, wind power, geothermal energy, biomass power, run-of-river hydropower and fuel cells. The so-called alternative-energy resources include advanced coal technologies, waste coal, coal bed methane, fuel from coal gasification or liquefaction, synthesis gas, natural gas, tire-derived fuel, pumped storage hydropower, and energy reclaimed from waste heat.

According to the U.S. Department of Energy, more than two dozen states have some form of RPS. These states account for more than half of the electricity sales in the United States.