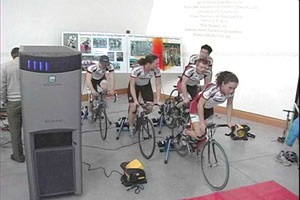 According to Computerworld, a group of cyclists from the Massachusetts Institute of Technology (MIT) powered a supercomputer for nearly 20 minutes by pedaling, marking the largest human-powered computation in history.

The supercomputer, a SiCortex SC648, was calculating research on nuclear fusion, and it drew 1.2 kilowatts of energy. According to the researchers, a conventional supercomputer could require 10 times the power to run the same program.

SiCortex is a Maynard, Mass.-based company that focuses on energy-efficient supercomputing. A spokesperson from the event said the human-powered session produced more computations than took place in the first 3,000 years of civilization, and it performed more arithmetic calculations than were performed before 1960.

The MIT team was highlighting the need for sustainable energy supplies, as well as competing for the Guinness World Record and for prizes in a bike company-sponsored competition called “Innovate or Die,” in which contestants use bike power in innovative ways and post their submission on YouTube.