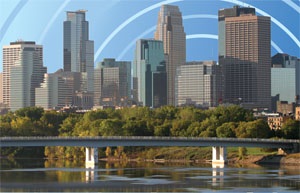 Just as other municipal wireless networks appear to be crumbling, the city of Minneapolis has emerged as the new standard bearer. The city is expected to have the majority of its 59-square-mile network finished this spring. The newly constructed public/private partnership is being heralded as the model for other cities to follow.

Two years ago, the city of Minneapolis signed a 10-year contract with USI Wireless of Minnetonka to provide Minneapolis with cutting-edge broadband technology. USI Wireless is a private company that will own, build and manage the wireless network. When completed, the wireless network will cover all 59 square miles of Minneapolis, providing residents, businesses and visitors with wireless broadband access anywhere in the city. The wireless contract also includes benefits to the community that go far beyond what any other city in the country has negotiated.

A portion of the wireless network had already been completed on Aug. 1, 2007, when the I-35W bridge collapsed, which allowed the city to use the network as part of its emergency response effort. This effort and other Wireless Minneapolis initiatives received international recognition when the city won the Wireless Internet Institute’s (W2i) Digital Cities Best Practices Award for e-Government Applications in December 2007.

The recognition stands in stark contrast to other muni Wi-Fi projects, which have not fared well after their initial fanfare. Late last year, plans for wireless networks in San Francisco and Houston had begun to falter.

For the Minneapolis network, USI Wireless is completing construction in six geographic phases and has now completed work in phases one through four. Phase five also is complete with the exception of 12 new poles that are being installed by the city of Minneapolis public works crews.

Even before its completion, the network is catching on. Approximately 8,000 customers have already signed up for services and are now using the network.