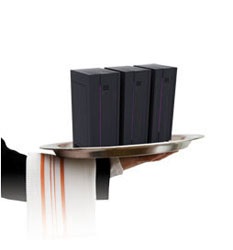 Once only found in high-end home theater settings, the residential media server is poised to become the next middle-market must-have. Electrical contractors who aren’t positioning themselves in this low-voltage market could be missing out on a range of future opportunities because these devices are becoming hubs for broader home-automation applications, which also are reaching breakout status.

Media servers are, essentially, repurposed personal computers (PCs) with software that helps them manage networking and other tasks. The specifications for these devices—some of which include Microsoft’s Windows Vista operating system—look surprisingly similar to what you might find in a processor designed for video gamers but with hard drives that can provide one terabyte or more of storage capacity. However, some manufacturers say these units also offer performance characteristics more common to commercial enterprise settings, so the prices are going to be higher than those typically charged for the budget desktop machines from the local big-box appliance store.

“Consumers are going to have to understand that this is different than an off-the-shelf PC,” said Jeff Kussard, vice president for strategic development for Newmarket, N.H.-based Russound. “They’re not going to get the benefits a media server delivers from an off-the-shelf PC.”

Initially, media servers were marketed as music storage and distribution devices. Users burned their CD and MP3 collections onto the servers for access anywhere in their home. Then, as digital video recording (DVR) became common, the servers began acting as centralized storage units, accessible by any connected TV. More recently, manufacturers have begun adding jukebox-like attachments to serve up DVD-based video content, first for home theaters and then for distribution throughout the house.

High-definition televisions (HDTVs) are helping to build the media-server market, as well. Consumers now have become accustomed to the idea of spending money to improve their viewing experience. As the cost of these TVs is dropping, media-server upgrades start to look more attractive.

“I think we’re seeing a faster-than-expected shift in how content is delivered to consumers, and what’s interesting is how customers are adopting it. It’s probably going to start dominating the marketplace in the next two to three years,” Kussard said.

Parks Associates consultants have noted digital programming as one of the factors behind increased home networking, which the group identified as one of the key trends it expects to see move forward in 2008.

According to Parks Associates, “the next generation media server will be an affordable, must-have component for mid-range entertainment systems.” Media servers could simply become another builder-included appliance. Parks Associates said this already is happening with home theater systems, which builders include as standard features and buyers simply wrap into their home mortgages.

Adding to the demand created by centralized entertainment options, new home-automation technologies are boosting media-server installation numbers even higher. Homeowners are tying the devices into home-automation systems for centralized control of heating, air conditioning, lighting, security and even electronically controlled window coverings, all through the use of a single universal remote control. The media server, when connected to the Internet, also can enable monitoring and control of connected systems from outside the home. And new wireless light switches, thermostats and other control devices are making it easier than ever to add these advanced functions.

Experts say this added capability, along with falling prices, is drawing new interest from consumers.

“[Consumers] want a box that has the ability to do more than just record TV,” said Mike Seamons, marketing vice president for Life|ware, a Westerville, Ohio-based manufacturer of media servers and related software. “One of the big things that we’re getting a lot of traction on is this box that has the capacity to control the house.”

Until recently, custom home builders had been the primary target for media-server makers’ marketing efforts. And, despite the overall housing slowdown, these building professionals remain manufacturers’ primary connection to consumers.

“The main meat is the mid- to high-end housing market,” Seamons said. “And this isn’t slowing down as much as production home building.”

As system prices are beginning to fall and consumer awareness of the product category grows, some companies are exploring more direct marketing efforts. For example, Life|ware is offering its new entry-level systems direct to consumers, through its Web site and other outlets. Installing this equipment to a single home theater system may be within the abilities of homeowners who also have connected their own home networks or HDTVs, Seamons said. However, networking the devices to other televisions or home-automation systems likely will require professional help, thereby providing business for electrical contractors.

“Once you get out of that basic use, we believe the professional will be involved in the majority of homes,” he said. “It will elevate the need to have a contractor who’s a part of your life.”

The Parks Associates study reiterates Seamons’ opinion, with researchers seeing a continuing role for professional assistance as technologies continue to evolve. Such “digital home advisers” also could provide remote diagnostic and troubleshooting help, along with product and service recommendations, the report suggests.

This means providing good service with the initial installation could bring your company ongoing business for years. Customers who initially just wanted to upgrade their entertainment options eventually will see the benefit home automation can offer. To succeed in this business, electrical contractors will need to be able to turn customer requests into technology solutions.

“You’re going to have consumers relating to these technologies in directed, defined ways,” Kussard said, explaining that these homeowners will know what they want their systems to do, although they won’t necessarily know how to meet that need. “We have to get electrical contractors to understand that when consumers come to them with these questions, they need to know the answers.”

Electrical contractors already familiar with low-voltage installation are well-positioned to pursue new media-server installation opportunities, Seamons said. Wiring—the same as that for computer networks—is now becoming common in mid-level homes and above, using cable ranging from Category 5 to Category 6, based on the homeowner’s bandwidth requirements.

Connected devices could include the server (which might be located next to the primary TV or in a separate server closet) and extender boxes for networked locations throughout the home. Additionally, speakers might be a part of the homeowner’s plan as part of a distributed-music system.

Your customers also may need to purchase a DVD jukebox if they want to be able to access a DVD library through the network. DVDs have a different level of copyright protection than music CDs, and to date, only one media-server maker has won the right to enable hard-drive storage of DVD material on their equipment. Kaleidescape, of Mountain View, Calif., has developed its own operating system with security that has stood up to court scrutiny in several lawsuits. However, the company’s top-of-the-line media servers also require its proprietary players, and the combined systems are outside the budgets of many homeowners.

Kussard said an understanding of how to work with network wire and the ability to test and certify that network once it is installed represent the entry-level skills for getting into this market. Beyond that, becoming Ethernet-certified and gaining dedicated training to handle home-automation installations can provide additional opportunities for new work. Some manufacturers require this kind of training for any professionals installing their products.

The potential of low voltage

Even with the potential need for added training, Kussard said the standardization of these products on the Windows Vista platform is making home-automation business more accessible to those outside what once was a tightly knit industry.

“Historically, if an electrician ever found himself curious about systems integration, he found that it was a very tightly knit community that wasn’t freely admitting new members, and the opportunity to break into it was extremely limited,” he said. “Now, media distribution and home automation just took a leap forward by being standardized on the Vista platform.”

Of course, a certain amount of customer training also will be required. Homeowners who may have trouble programming a VCR definitely will need assistance from the installation contractor on how to work with the universal remote controls that typically are a part of media-server packages. Responsiveness to questions over time can help build the customer loyalty that can win you upgrade projects down the road.

“There are a lot of forces that are making these technologies more and more interesting and compelling,” he said. “Never was there a better time for electrical contractors to get into residential low-voltage systems. The technology has become more accessible to the consumer and to the systems installer.”