The Marketability of Alternative Energy 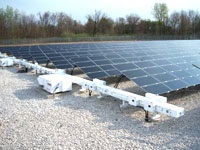 Even during the Recession, the alternative-energy market has remained strong, either holding its own or growing. Throw a stick, and you will hit a project incorporating green power. It is a market driven by consumer interest, generous incentives and improving payback. Contractors who have added clean energies to their portfolio expect this market to boom as the economy recovers. For those on the fence, learning how to be a successful player is the first step to getting into the game.

Alternative energy touches all sectors—commercial, industrial and residential. The Database of State Incentives for Renewables & Efficiency (DSIRE) shows solar projects or opportunities both large and small in every state. Photovoltaic (PV) cell, panel and inverter manufacturers, and their customers are an economic engine in California. SolarBuzz.com lists 24 manufacturing firms there. Smaller numbers are listed in 27 other states. The site also shows installers in at least 44 states. While California almost triples the next leading state in installers, states in descending order include Florida, Arizona, Colorado, New Jersey, Texas and New York. Electrical contractors (ECs) are tapping into this demand.

While solar certainly leads, utilities and other public and private enterprises are backing wind farms that tie into the grid. Geothermal, biomass and fuel cells have also found consumers. What does each have in common? They are power plants requiring talented electricians to wire them backed by ECs who provide energy solutions.

“It is a question of being competitive,” said Bernie Kotlier, director, Green Energy Solutions, California Labor Management Cooperative Community (CALMCC). “Contractors are in the business to make money. We advise electricians, contractors and others to appeal to the energy solutions market. To gain a competitive edge, enroll in every green-energy class, and gain expertise in these technologies.”

The solar express
“The solar market is rapidly growing and is estimated at tens of billions of dollars,” Kotlier said. “PV panel costs have gone down 50 percent in the last five years. I’ve seen solar growth projections reaching $100 to $150 billion in six to eight years.”

He added that while an estimated 70 percent of the solar market resides in California, the remaining 30 percent is making headway in other parts the country.

Romanoff Electric Co. LLC, in Toledo, Ohio, added PV installation to its capabilities two years ago. Jerry Heminger, vice president of its service and special projects division, said his company’s success with solar and other alternative energies has been helped by finding what role these alternatives can play in meeting an energy-efficiency goal.

“Our overriding objective is reducing the load in any one building. That might include adding efficient lighting, controls or other actions. The alternative-energy option then reveals itself as that final piece in accomplishing the goal. It has to make sense for us and our customer as to what, where and how we use a green-power source,” Heminger said.

O’Connell Electric Co. Inc. in Victor, N.Y., entered the solar market in 2002. Five years later, it acquired Rochester Solar Technologies.
“Solar is now pretty established in our state,” said Tim Ehmann, senior project manager. “The typical solar installer is a smaller firm. I think integrating solar into our larger business has helped us compete. Our electricians have received training in solar and roof work. We have all gotten up to speed on how to price this work. We too start the discussion focusing on adding efficiency. PV would be the last element. The more energy efficiency you create, the less PV you will need, making it more attractive. It has been our entry into the residential market.”

Heminger emphasized training.
“We entered solar cautiously, so we understood the whole installation process from A to Z. We have gone through programs ... including online, as well as seminars offered by solar equipment manufacturers. We also joined the American Solar Energy Society. You need to do your homework. When working with solar, no two installations are the same.”

“New York had its first wind farm in central New York,” Ehmann said. “We were involved in the collection system, designing and constructing a power station and substation used to drop voltage to appropriate levels for each turbine. We probably have done 90 percent of some 20 wind farms in our state. About half of these projects have been multiple phase, featuring 50 to 100 windmills per farm. Work can be complete turnkey or smaller, such as handling power wiring, communication or point of connection. We see return work in maintenance or emergency calls.”

Ehmann is intrigued by community-owned wind projects, which are popping up in townships, college campuses and industrial parks. Such smaller projects could be big in volume.

“They offer an extended 15-year payback, which suits customers with longer residencies. We are currently working on a wind turbine project for a new Cape Cod green business park,” Ehmann said.

He added the EC is not the one to site-develop (e.g., wind modeling), though his firm has powered meteorological towers that measure wind for consideration and development.

“The only specialty we needed was certification for tower wiring, procedure and safety. Wind projects put you up on a tower some 90 to 100 meters. You need to train in rescue procedures. Manufacturers of tower rescue devices typically offer certification. We’ve also received training in power and wiring of tower electronics through companies such as GE,” Ehmann said.

To date, Romanoff Electric has just dabbled in wind work.

“I have only done a 0.5 MW windmill project at the Air Force base outside Toledo. We won the work by collaborating up with a general contractor who had wind experience. Our focus on wind is not necessarily selling the windmill. We’d rather stick to wiring and powering them. We’ll let the other partners you need in this market do their jobs, such as the erectors and mechanics who might tweak the blades to better capture the wind.” Heminger said.

“Our CEO [Dennis Quebe] is a very impressive marketer and an advocate,” Heminger said. “A customer asked why I spend so much time explaining the benefits of solar or wind. I answered, ‘the more you understand what you are buying, the more comfortable you will be in your purchase.’ In two short years, six of 10 customers now come to us.”

“One of our solar projects is the 180th Air Guard base in Toledo,” Heminger said. “We just expanded an array by 400 kilowatts but also did something new with it. We tooled the DC side to 1,000 volts (V), which is not common in the U.S. This approach offers less wire and wire size. We also went to a 1,000V central bus. We have three inverters that phase themselves on an as-needed basis. Our collaborator, a new inverter company, wanted to try a few new things that led to this bus approach. It is novel and more efficient.”

O’Connell Electric’s solar work is largely the result of word of mouth. The wind side of its business is similar.

“Once you get a few projects under your belt, people do talk to you,” Ehmann said. “Residential customers who may be architects or engineers have considered solar for their business offices or a windmill for a demo project. You never know where one sale might lead.”
The incentives driver

State rebate programs, production incentives, tax credits, loans and more are everywhere. They can lead to business. DSIRE offers an extensive listing including power purchase agreements (PPAs). Individual state and local government websites are also worth visiting. Incentives paint a picture of which alternative energies offer the most opportunity. Follow the link to www.recovery.gov, and you see the impetuses driving the latest incentives. In funding dollar order, biomass, geothermal, solar, wind and fuel cells are earmarked through the Department of Energy and the American Recovery and Reinvestment Act of 2009.

“Clearly, incentives are working to build volume,” Kotlier said. “While alternative-energy markets really take hold in regions with higher utility rates and/or incentives, they can benefit everyone by building volume that lowers costs.”

“We are right on the bubble in our state for solar being fiscally attractive, so incentives (federal and state) play a big role,” Heminger said.
Ehmann added, “The solar market didn’t take off for us until 2007 when residential incentives were bolstered by both state (30 to 40 percent) and federal (30 percent) combining for a 60 percent enticement. You need that advantage to make solar work in much of our state where 90 percent of our power is relatively cheap, averaging 12 kW per hour. New York City and Long Island differ, facing electric rates similar to Los Angeles. That is where solar really kicked in initially. We’re getting down to seven- to 10-year payback times.”

No matter the technology, all three men offer ECs the same advice—keep your eyes open.

“There is plenty of alternative-energy business,” Ehmann said. “Gain a working understanding of each (wind, solar, etc.). Alterative energy has certainly helped us pick up the slack from our shrinking industrial work.”

GAVIN is the owner of Gavo Communications, a marketing services firm serving the construction, landscaping and related design industries. He can be reached at [email protected].