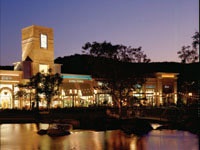 “We couldn't take Thousand Oaks to Minnesota, so we’re bringing the Land of 10,000 Lakes to California,” announced a July 2005 editorial in the The Thousand Oaks Acorn newspaper; they did, with the opening of The Lakes, a Caruso Affiliated Development in Thousand Oaks, California, a suburb of Los Angeles.

Just after the 2005 dedication of the $40 million center, the outdoor skating rink opened for the holiday season. It was one of the amenities promised to the community in exchange for approval to build the mixed-use retail, restaurant and park-like center, which received a 2005 National Electrical Contractors Association (NECA) Electrical Excellence Award for exterior lighting. Taft Electric Co. shared the honor with the developer Caruso Affiliated, Perkowitz+Ruth Architects and lighting designer Francis Krahe & Associates.

“We were originally attracted to the project,” Eddy said, “because we had participated in previous projects with Caruso and we knew it would be upper-end electrical lighting, that it would have sophisticated controls and custom fixtures and that we could use our expertise.”

Taft Electric had a crew of 20 doing the core and shell and the exterior lighting for the 11-month project. Cartier Electrical Technologies Inc., Simi Valley, Calif., did the electrical for the water features. Other contractors worked on individual stores.

The Lakes is the third and newest shopping center in Thousand Oaks developed by Caruso Affiliated and is based on the idea that the future of retail centers is in the outdoor format. The company might be right. It also developed The Grove, a $200 million shopping center that opened in 2003 in a busy Los Angeles neighborhood and drew an estimated 18 million visitors that year. Both The Grove and The Lakes are designed as active, outdoor promenades, although the Lakes is smaller and in a less densely populated, bedroom community. The 48,000-square-foot, family friendly center has 11 shops and four restaurants fronted by an inviting, four-acre park and one-acre lake built around existing oak trees. A clock tower featuring the world’s largest Cartier timepiece, lit by concealed floodlights, is the centerpiece.

Lifestyle center
“Most of what we build is streetfront retail lifestyle centers, open-air shopping centers, with high-end finishes that have a high attention to detail in terms of the lighting, storefront and stone finishes. We build centers that are the nicest in the business and our customers, tenants and guests respond well to that,” said Michael McManus, senior vice president, Construction, Caruso Affiliated. By design, The Lakes edges Thousand Oaks Boulevard with the parking area away from the street. Service areas are also hidden from view.

“The idea was to have The Lakes be specialized to the community, a place to shop and also to stay and share life and to have a pedestrian experience that related to the lakes,” said Stephanie Mehl, senior project designer, Francis Krahe & Associates. In the park, which was created by landscape architects Lifescapes International, families can stop to look at the waterfall, walk along the park’s path or play on a sand beach that edges the lake. The project, designed by Perkowitz+Ruth Architects, Long Beach, Calif., has done many national retail projects and was also a Superior Achievement in Design and Imaging (SADI) 2006 award winner. The lighting specification by Taft Electric is highly specialized and detailed. Each of the buildings in the center is set off by its own color of light using concealed neon.

“The architecture allowed us to integrate the concealed neon sources and give a glowing effect with warm colors like rose, salmon and amber,” said Campbell Coulter, project designer, Francis Krahe & Associates. It was difficult to integrate the neon installation into the architecture, she added. “It was a detail that needed to be coordinated between the architect, electrical contractor and neon manufacturer,” he said.

Buildings faced on all four sides with limestone, granite and copper required a soft touch by Taft Electric and California Cathode & Neon, a subcontractor to Taft Electric on this project and also the manufacturer of the 1,500 linear feet of neon the two companies installed.

“The neon was difficult, because it was in a location specified by the architect that was in close proximity to other finishes,” said Eddy. “Some of the lights were 10 feet long. The locations were tight, and we were installing them at the last minute.”

California Cathode & Neon also installed color-changing LEDs on one of the stores as well as a controller for the unit.

Daytime compliant
Lighting in the park had to be of an acceptable light level for use at night and during the day, so the designers chose to use cable lines with small lights that would go between the retail front and the lake to contribute to the overall ambient light level. The lights create a sparkling diamond necklace effect. Getting the lights on the cables and strung to the poles within the time frame called for some strategic planning and prefabrication by Taft Electric.

“There was a crane running through the park area lifting boulders and setting them in place,” said Eddy. “Pole lighting couldn’t be installed until the last couple of weeks while we were waiting for the landscapers to finish with the boulders. They were finishing the lake and trying to get it filled. It was a madhouse the last couple of weeks before the grand opening.”

“Our foreman made detailed measurements because all the poles were different lengths apart,” said Eddy. “Every string was a different length and the designers wanted the same effect as far as how the strings looked so that they’d be typical from pole to pole. When the strings arrived at the job site, the prefabrication department had numbered each of them so they could be easily put in place. They all fit perfectly. Those went up the day before the opening, because the other trades were running equipment through there and planting grass and trees until then.”

While Taft Electric was waiting for the park to be completed, Cartier Electrical Technologies worked on the park with Rock & Waterscape International, Irvine, Calif. It did the electrical work for the water feature, including the waterfalls and the recirculation system.

“We had to get all of our work completed in less than 10 days,” said Eric Cartier, president, Cartier Electrical Technologies. “It was a lot of hours in a short amount of time. We had four people on it, and they worked for a bit more than a week doing 14- to 16-hour days. We had to install all of the electrical components to connect the pump vault, the motor and lighting controls, the lighting in the lakes, and the fountain lights. We had to do it in the process of finishing the lake before the water was in it.”

Another last-minute installation that fell to Taft Electric involved the stores. “Tenants also wanted to be open for the grand opening, so we had to jump through hoops to get the power turned on to all the different suites and to get the telephone service in place and the security cameras to support the tenant portion,” Eddy said.

Installation of custom fixtures that topped the light poles in the main retail pedestrian walkway was another rush job.

“That came together just before the grand opening when the over 100 custom fixtures arrived,” said Eddy. “We were almost working around the clock at the end. The second shift of about five guys came in after the landscapers had left for the day, so that we could get into areas that we wouldn’t have been able to work in otherwise. We had to have more people on the job that we would normally have wanted to have had in order to make the announced grand opening. Fortunately, we had the availability of Local 952,” Eddy said.

Taft Electric also had to take particular care with the fixtures, which were custom glass lanterns inset with jewel-like pieces of yellows, reds and a bit of green glass. Each pole’s lantern design is different, but they all give a beautiful stained-glass effect.

“The whole team of contractors did an outstanding job. Everybody worked together to accomplish it in a short amount of time,” Cartier said.

The kudos keep coming for the project, Taft Electric, the developer, the architect, the owner and all others who made teamwork an ingredient to create a new shopping destination.

CASEY, author of “Kids Inventing! A Handbook for Young Inventors” and “Women Invent! Two Centuries of Discoveries That Have Changed Our World,” can be reached at [email protected].