Life Safety in the Mix 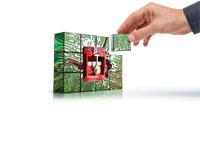 Building management systems are the wave of the future—especially for large commercial and institutional buildings and campuses. Building management systems enable centralized control and monitoring of electrical and mechanical systems and, at the same time, simplify the infrastructure for managing these systems. Using Internet protocol (IP), all of the information for doing this can be sent on a pair of copper wires, a fiber optic cable, through the air by radio frequency (RF) or a combination of these. The one exception is fire alarm systems.

The reason for this one exception is that fire alarm systems, being crucial to life-safety, are governed by code (mainly NFPA 72), laws, requirements of local fire departments and even some owners.

Robert Akovity, sales manager for Siemens Industry Inc., fire safety division, Buffalo Grove, Ill., said that although the clear trend in building management systems is toward IP convergence, the current state of fire safety technology, the industry, and national and local codes still have some way to go to embrace IP convergence.

On the other hand, with more emergency management functions, such as the addition of mass notification to fire alarm systems, there will be an inevitable move, however gradual, toward IP convergence for those systems as well. In addition to mass notification, fire alarm systems could include life-safety functions beyond just alarming in response to a smoke detector or a pull box. In the future, they could respond to actual temperature levels, smoke, gas and chemical detectors, and they can be used for mass emergency notification in a variety of situations (e.g., tornados, acts of terror, intrusion, etc.).

This complexity is inevitably causing the expansion of networking among the components of fire alarm systems. Many fire alarm control panels have built-in computer intelligence that allows each panel to act as a “node” in a peer-to-peer loop. Commercially available panels can handle as many as 5,000 system points. In a peer-to-peer network, each panel contains all of the programming for the area served, so if any single panel becomes damaged and stops functioning, the rest of the system will still operate.

“Fire alarm systems will be undergoing dramatic changes as more and more functions are attached to them,” Akovity said.

As the integration within fire alarm systems becomes more sophisticated, there will be more pressure to use the information generated within the system to enhance the overall functionality of the building information system.

Ideally, to implement this growth, all systems would communicate using open, rather than proprietary, protocols. Counter to intuition, the ultimate “open protocol” exists today in the form of a dry-contact closure. Any component of any building system can accept a contact closure as an input. Although building systems controllers can be programmed to respond to that closure in a complex manner, a single closure can only elicit a single response. It can mean there is a fire, so all building systems should go into fire response mode. However, it would be a shame not to use more of the information resident in the fire alarm system. For example, if it reports: “a smoke detector on the east wing of the 12th floor has gone into alarm mode,” the other building systems could change in response to these particular conditions. Although this could be accomplished with contact closures, communicating increasingly specific information would require adding banks of relays. At a certain point, this becomes physically and financially unwieldy. Adding a single digital communication interface can replace an array of relay panels and a large bundle of wires. Digital communication only requires a single cable.

Dealing with the diversity of protocols for building management systems is a problem, but the solution exists. One protocol is BACNet—originally developed by ASHRAE for heating, ventilating and air conditioning (HVAC) systems—which is becoming a commonly used information backbone for all building systems, especially in the United States. Some fire alarm equipment manufacturers have already developed BACnet gateways. However, many other protocols are still in use.

Each system, e.g., fire alarms, smoke control, security, access control, is controlled independently according to its needs and communicates with the others over a common building management protocol. Each of these systems evolves according to its use of technology and its own inner logic. But as is especially the case with life safety systems, technology is not the only factor. Growth is modulated by the push and pull of market forces, the state of the economy, laws and regulations, culture, and tradition.

BROWN is an electrical engineer, technical writer and editor. For many years, he designed high-power electronics systems for industry, research laboratories and government. Reach him at [email protected] or at www.writingengineer.com, an independent professional writing service.