Home Networking Over Coaxial, Phone Wiring Set to Take off in the Next Two Years 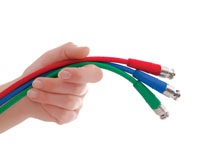 As the demands of home technology users become more sophisticated, it stands to reason that their use of in-home wiring will change, too.

The Scottsdale, Ariz.-based market research firm, In-Stat, said coax and phoneline networking is becoming increasingly important among home network connectivity alternatives, particularly for service provider-provisioned networks. The research projects the number of households with an in-home provider network that uses coaxial cable and phoneline technology to more than double in the next two years.

Indeed, nearly two-thirds of consumer respondents from In-Stat’s survey expressed an interest in watching Internet video on their TV. Putscher added that “networking over coax makes particularly good sense in North America where 90 percent of homes have pre-existing coax wiring.”

According to In-Stat, two segregated home networks have been evolving: a service provider-centric network, and a PC-centric network. Each is leveraging different business models and technologies.

In 2010, the firm expects average PC home network throughput to exceed 150 Mbps in North America, ahead of the throughput in Asia/Pacific and European households.