Historic Makeovers: The Art of Renovating the Past 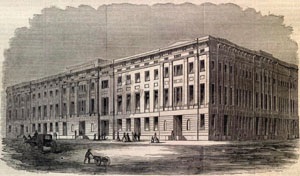 If there is any major US city that is as knee-deep in history as it is in fairly regular hurricane-driven flood waters, it would have to be New Orleans, which makes it the logical place to find electrical contractors who know as much as there is to know about the fine points of historic renovation work.

One company that has built a reputation for carefully and effectively working on the restoration of some of the most famous landmark structures of the Crescent City is Frischhertz Electric Co. Inc. It is currently involved in three major renovation projects in the city: the U.S. Custom House; the old Fairmont Hotel, which will reopen as the Roosevelt Hotel (part of the Hilton organization’s Waldorf Astoria Collection chain); and the Mahalia Jackson Theatre of the Performing Arts.

The need for renovation work on these properties relates directly to the devastation visited by Hurricane Katrina in 2005, but there is the question as to why one electrical contracting company should have been selected for all three jobs which cumulatively represent approximately $35 million of project work.

Jim Frischhertz, president of the family-owned business, said there is no strategic game plan or blueprint for success in the historic renovation market. It depends largely on your own company’s historical background in the field.

“When I started with the company in 1970, the first job I became involved in was the renovation of the old French Market, and that project worked out well,” he said. “A few years later, we did the electrical work on the old U.S. Mint building. These were bid jobs, and no negotiating was involved. But people had started to notice us, and we acquired a reputation for doing this style of project. And we worked with various architects throughout the city over time.”

This experience with the architectural community positioned the firm favorably when the complexion of the building market changed a decade and a half ago, and the trend toward design/build and design/assist became more prominent. Observers of the building scene in New Orleans note that leading architects in the historic renovation field have established a working relationship with perhaps four or five general contractors and two or three electrical contractors whom they feel confident enough to recommend to property owners.

Then, another market development occurred about 10 years ago that also worked in the Frischhertz firm’s favor. After the company had already been involved in major design/build/assist projects, the city aggressively entered a hotel building-boom cycle.

Once again, Frischhertz had the right reputation.

“Some 14 major hotels have been built over the past decade,” Jim Frischhertz said, “and we were involved in 10, because we had added the proven ability to efficiently convert old buildings into hotels.”

Know what you’re getting into

Steve Frischhertz, the company’s executive vice president and the project manager for the Roosevelt Hotel, cautions contractors that renovating older structures is more involved, costly and, in the case of historic buildings, more politically complex than typical new construction.

From the cost standpoint, electrical work in a renovation project can run anywhere from 25 to 50 percent higher than a new building.

Historic landmarks, many of them built before buildings were wired for electricity, can present some unique challenges to the contractor. Two of the 19th century structures the company has worked on—the Mint and U.S. Custom House—actually used lengths of railroad track as support beams. In addition, some of the extant architectural drawings from a century ago are less than reliable. In one case, walls that were shown to be 12 to 18 inches thick turned out to be a more than 8 feet of solid brick and mortar after core drilling began. And the political issues can be every bit as daunting as the structural anomalies. For example, the U.S. Custom House is under the purview of the U.S. General Services Administration (GSA), and any renovation work must conform to that federal agency’s stringent regulations.

In the specific cases of Hurricane Katrina-related renovation, the Federal Emergency Management Agency (FEMA) also was integrally involved, determining what federal funding could be made available for rebuilding efforts. For example, in the case of the Mahalia Jackson Theatre, the agency’s original funding commitment fell short of the amount that was needed, and only after negotiations with the city was this funding increased by approximately $4 million, making the renovation project possible.

In addition, on the local level in New Orleans, there is the Preservation Resource Center, an advocacy group with considerable political leverage and an impressive lobbying record in city government that has safeguarding of historic buildings as its objective. Developers have learned it is more practical and cost effective to work with the group prior to attempting any renovation of historic properties.

“More than any type of project work, historic renovation requires the contractor and the people he’s working with to sort out the problems at the front end of the process,” Steve Frischhertz said. “There has to be an interactive design team of architect, general contractor, electrical, mechanical, and plumbing contractors, and all of them have to understand the importance of the historic aspects of the building and the need to preserve that character. And that requires not only skill but imagination. Renovation demands a lot of innovation from everybody on the job.”

The Mahalia Jackson Theatre of the Performing Arts was probably the hardest hit of the three buildings that Frischhertz Electric is currently working on.

After Hurricane Katrina passed through, there was water damage from both above and below. Considerable roof damage followed by torrential rains led to destruction of the entire interior space, including seats, curtains, walls and floors. The basement was flooded and under 10 feet of water.

On this job, Frischhertz Electric is both general and electrical contractor, and efforts are being made to get everything out of the basement and above grade before actual renovation work can begin.

While by far the newest of the structures being worked on by the contractor, the nature and purpose of the theater's use have made the renovation task in some ways more demanding. This relates to the fact that the entertainment field has seen one of the most impressive technological advances of any industry over the past 10 years. The contractor is facing replacing an electrical and sound system that was originally built into the theater in the late 1960s and is no longer adequate to the demands of today’s equipment.

Steve Frischhertz said acoustical systems are much more sophisticated today. In the theater, there was only one 9-inch-diameter conduit pathway leading back from the orchestra pit beneath the auditorium floor and then up to the sound room, and this carried both electrical and sound wiring.

Today, a pathway of that size has to be dedicated solely to sound, because if sound and power are combined in the same conduit, this would cause interference with the more sensitive acoustical components. Therefore, alternative plans to run the power lines have to be devised, possibly running additional pathways back through the walls of the theater, or even running them outside the building and then back into the sound room.

The entire renovation project carries a price tag of $13.5 million. Work began in December 2007, and the theater is expected to reopen at the end of August.

The Waldorf Astoria chain’s Roosevelt Hotel has had a problem keeping the same name over the 115 years of its glamorous existence. It was first called The Grunewald after its original builder until it was purchased from his estate by a syndicate of local investors in 1923 who renamed it The Roosevelt Hotel in honor of the then recently deceased president. Over the next decade, a spacious suite was retained in the hotel as the political headquarters of the storied Louisiana governor, Huey Long.

In 1965, it was again purchased and became the Fairmont Hotel, and now it will reportedly revert to being called the Roosevelt Hotel.

Like the theater, the hotel suffered extensively from basement flooding, which was where the building’s power plant was located. All electrical connections, pumps, elevators, and kitchens were virtually wiped out, according to Bruce Frischhertz, the project manager.

There also was roof damage and water infiltration from above, requiring all new plaster, Sheetrock, and a complete new electrical system installation. The electrical work is priced at $10 million. Renovation started at the end of 2007, with an early 2009 target date for completion.

This massive four-story granite structure, occupying an entire city block, was begun in 1848 and not completed until 1881.

Although only a few blocks from the Mississippi River, the major source of water damage was not from flooding but from roof leakage. According to project manager Kevin Frischhertz, the water penetrated down through the plaster walls and destroyed most of the electrical equipment and wiring in the building.

What complicates the renovation of a structure this old, he said, is the fact that the original construction design predated the use of electricity. Not only are some of the walls four feet thick, but the ornate Classical Greek Revival ornamentation—with Corinthian columns, barrel vaults and groin vaults—presents a considerable challenge in the installation of power lines and lighting. In addition, workers found hidden railroad track sections used as support beams, which the contractor had already encountered more than 30 years ago in the U.S. Mint project.

Under the watchful eye of GSA inspectors, the historic integrity of the building had to be preserved every step of the way as the job progressed. Work under general contractor Woodward Design Build, LLC began in August 2006 and is due to conclude this September, with the electrical portion of the project valued at $5 million.

“Historic renovation is specialized work,” said Jim Frischhertz, “and any contractor considering it should expect prospective customers to demand extensive experience as well as documented performance in the field.”

QUINN reports on a broad range of business and industry issues for journals in the United States and Europe. He can be reached by phone at 203.323.9850 or by e-mail at [email protected].