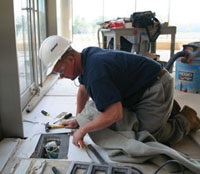 The Mandarin Oriental Hotel is the only five-star accommodation in Washington, DC. Low-voltage cabling, data, telecommunications and security and fire alarm contracting by Mona Electric Group was part of the package.

The location is perfect. In the heart of the nation’s capital, within walking distance of world-renowned museums, theaters and a host of cultural activities for residents and visitors, the Mandarin Oriental international hotel investment and management group made the right choice by adding the luxurious hospitality venue to its list of some 31 deluxe first-class hotels and resorts nationwide.

Work on the nearly 500,000-square-foot structure began in spring 2002 and, from the beginning, the Mandarin Oriental redefined accommodations. The hotel features 16 different types of hotel rooms and suites, along with an 8,300-square-foot ballroom, lobby lounge, cocktail bar, massive health spa and fitness center with indoor pool and waterfront views, conference facilities, meeting rooms and a business center. Worth more than $100 million, the project took more than two years to complete, and the low-voltage electrical contracting work was impressive.

“Mona worked before with all of these companies on various projects throughout the region,” said Dave McKay, chief operating officer and executive vice president.

Mona had worked on several new high-profile hotel construction and renovation projects in the area, including the Omni Shoreham, the Wardman Park Hotel, the Key Bridge Marriott and the Ritz Carlton.

Mona was originally approached by Armada/Hoffler for an initial budget estimate at least a year before construction began. However, the owner still needed to finalize its financing, which meant another year before Mona was asked to resubmit its final proposal.

“We were already on Armada/Hoffler’s list of prequalified bidders based on our reputation and the market research and reports that demonstrated we had the financial and manpower resources to handle the job,” McKay said.

During the bid process, Mona collaborated with the team to complete the design and bring the job in line with the budget. Based on its solutions, the entire construction team chose Mona Electric Group to complete the $11 million electrical and low-voltage portion of the project. Although its design suggestions during the initial bid process led to the project award, Mona’s responsibilities didn’t stop there.

“During construction we had to continually find ways to refine and complete the design and to use our field expertise to provide practical solutions to design conflicts or challenges,” said Randy Kurty, vice president of business development and preconstruction services.

And as a provider of luxury accommodations, the owner was precise and particular in its design demands. For example, in making the final decisions concerning room design, two mock-up rooms were built so that the owner and design team could examine every detail before determining what the final product would look like.

It took an average of 40 and a peak of 60 electricians to complete work on the hotel’s electrical and lighting, fire alarm, security, telecommunications and computer network systems.

For the hotel’s three-layer distributed process security system, SimplexGrinnell, Boca Raton, Fla., was Mona’s subcontractor. The company installed card access readers throughout the building to control entrances to offices and special rooms; perimeter closed-circuit television (CCTV) surveillance cameras to monitor the grounds outside, and public areas inside the building; and panic alarms installed in locations where employee safety, money or other hotel resources needed extra protection. For the cameras, coaxial cable, twisted pair shielded communication cable, Category 5 structured cabling, copper or fiber optics were used, depending on the device and its function. All cabling was run from each device and terminated at the main security control panel on one of the basement sublevels. For the distributed card access system, cabling was run from each device to field interface panels, which were then tied together through telecommunication cabling.

The Mandarin Oriental’s fire alarm system is network addressable and consists of more than 1,000 pull stations, horns, strobes, duct detectors, heat and smoke detectors, and flow and tamper switches for the sprinkler system. All guest rooms have speaker strobes to alert the occupant of a fire and provide audible evacuation instructions. Mona’s electricians installed all the devices and routed and terminated the cabling at the main fire control panel. They also installed an annunciator in the lobby, one on the ballroom level and one in the building engineer’s office where the system is monitored. Though unusual, each phase of the installation was granted partial occupancy after testing and acceptance by the authority having jurisdiction.

“Testing and maintaining the system under these circumstances meant multiple programs had to be sustained. But by working with the fire marshal’s office, we were able to perform the test with minimal disruption of occupied areas,” said Dave Case, systems manager.

Main power for the hotel is brought in from the local utility’s transformer located in a street vault to two 4,000-amp switchboards in the main electrical distribution room on one of the basement’s sublevels. From those switchboards, power is transferred to approximately 20 remote distribution boards located throughout the hotel and from there to hundreds of panelboards and approximately 260 transformers for either 480 or 120/208 volt power for general use and lighting.

Mona also provided the hotel with an entire voice and data cabling infrastructure by distributing fiber optic and copper cabling from the main distribution frame (MDF) supplied by the service provider to the more than 20 intermediate distribution frames (IDF) located throughout the hotel. From the IDFs, computer network cabling was routed directly to data outlets throughout the hotel for computer and high-speed Internet access.

“By integrating its personnel into the construction team and maintaining high levels of collaboration and communication, Mona was integral to the success of the project,” said George Schwartz, project executive for Armada/Hoffler.

That integration allowed Mona to meet the challenges of working with the interior designer and building architect and coordinating its efforts with the construction team.

When the project was first conceived in 2000, the owner’s consultant devised preliminary plans for the telecommunications and phone systems, but no changes were made between then and when construction commenced in 2002. It fell to Mona’s team to adjust and upgrade those plans, redesign the system to accommodate the owner’s final vision, and to take into account changes and advances in technology and functionality.

“We used the expertise of our technicians to formulate ways to blend the original design with the owner’s final intent to provide the final product,” said Howell.

It took a lot of teamwork and collaboration to provide the owner with the District of Columbia’s only five-star hotel and achieve such extraordinary levels of finish. Throughout the project, the team members worked closely together to solve design problems and budget issues.

“The entire team communicated constantly to resolve site concerns as they occurred and to solve them before they became critical and harmed the project,” McKay said.

Mona was founded in 1966 by Vincent “Cap” Mona to supply electrical installations in the commercial service market. The first major account that Mona landed, which allowed the company to begin its growth, was wiring the special outlets needed in offices for one of Xerox’s earliest copy machines. From that point, the company has grown into Mona Electric Group, a privately owned, family-run, full-service contractor, offering electrical service and construction, life safety and fire alarm, voice/data/video, testing and maintenance and 24-hour emergency and complete disaster-recovery services for the commercial, hospitality, sports venue, healthcare, biotech, institutional and educational markets. With approximately $70 million in annual sales, the company has more than 500 field personnel and more than 100 office staff providing design, estimating, budgeting, sales, administrative, accounting and project management support.

“Our goal,” said Cap Mona, chairman and CEO, “is to provide our customers with a single-source solution of designed construction from project conception to completion and into the future.”