In a Heart Beat 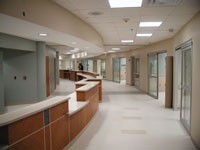 It is tough for doctors and nurses who have to work a hospital’s grueling 24/7 schedule; it is also challenging for the electrical contractor who installs new electronics and alarm systems in a hospital, as workers have to be prepared to work around everyone’s schedule, while considering patient comfort.

Several jobs, including the new addition and renovation project at Arrowhead Hospital in Phoenix, have tested the capabilities of Cannon & Wendt Electric Co. Inc., Phoenix, to the fullest, and the company continues to come through with flying colors.

Cannon & Wendt has built a solid electrical contracting practice around hospital and healthcare electrical as well as serving other vertical industry segments in its 62 years of business in the “Valley of the Sun.” In addition to installing alarm systems and running wiring, the Arrowhead Hospital project had some significant cabling and routing challenges for the engineers and the rest of the team.

Project manager Bryce Godard and his team are currently finishing the expansion portion of the highly specialized addition and renovation project at Arrowhead Hospital. Cannon & Wendt got the job partially because of the emergency department remodel it did at Paradise Valley Hospital with the same general contractor and owner and also because of its strong reputation as a top-of-the-class systems installer.

In June 2004, workers broke ground on the 174,000-square-foot Arrowhead Hospital expansion project that will double the size of the facility, increase its bed count to 220, add the latest technology and increase staffing levels. Arrowhead’s intensive care unit (ICU) will grow from nine to 18 beds with capacity for an additional half-dozen beds. The hospital will nearly double the number of medical, surgical and telemetry beds from 85 to 165. It is expanding from seven operating rooms to 10, with capacity to add two more. Meanwhile, the hospital’s emergency department will expand from 17 to 30 beds and its women’s and infants’ services sector will expand from 14 labor and delivery rooms to offer 20 private postpartum suites for new mothers and families.

Shane Snyder, vice president of Cannon & Wendt, said one of the project’s issues was getting all of the new feeders from the central plant to the new expansion while, at the same time, keeping the existing hospital 100 percent operational during construction.

“This proved especially difficult due the fact that the new expansion is on the opposite side of the hospital’s central plant,” Snyder said. Workers wove raceways through the hospital’s ceilings to the new tower and everything had to remain fully operational.

It was a cat-and-mouse game to find the most efficient route through the building. The new routing started at the existing building and traversed through the new hospital over several floors housing surgical rooms, recovery rooms, laboratories and emergency room operations. A new parking structure, main lobby, cafeteria and patient check-in area were also on the opposite side of the existing building. In other words, a new hospital was built around an existing, operating one.

Of course, one of the team’s main concerns going into the project was maintaining a tight schedule without affecting the day-to-day schedule of the operating hospital.

“The main restrictions we encountered were working in and around an operating hospital,” he said. “This caused us to schedule all our work in occupied areas around the hospital’s operations. Plus, all shutdowns had to be done on off hours.”

Initially, however, the design team did not think this amount of conduit could be run through the original hospital building. Designers expected to have to take an alternate route. Foreman Mark Ross researched a route and saved a fair amount of time and expense by running the conduits through this area.

“Planning is key to success, and this is a prime example of that,” Ross said.

A Lithonia lighting systems package was used throughout the hospital. Electrical for the Philips medical imaging equipment also was installed by Cannon & Wendt as well as a Notifier by Honeywell fire alarm system. The Notifier system includes a total of 670 devices, including control panels, network systems and peripheral devices. IBEW 640 electricians performed all of the installations.

In addition to the original project, there was the new parking structure and a renovation of the existing kitchen. The expansion portion of the project was completed and turned over to the owner at the end of 2006.

The renovation portion of this project will continue through July 2007, Snyder said. The job was done on a straight-bid basis, although Cannon & Wendt also does design/build work. Permanent power to the tower was turned on ahead of schedule.

“I would have to say the most valuable asset on these jobs is teamwork,” said Cress Page, director of safety and training. “The owner, general contractor and electrical contractor all worked together to reach the same goal, and all parties placed a high importance on the electrical system.”

Page said building a medical facility requires a special kind of expertise. “It takes an almost encyclopedic knowledge of the intricate systems required to keep emergency life support, intensive care and critical care units in continuous operation,” he said. “And it requires an intimate understanding of the installation and maintenance of data processing systems, emergency power facilities and complex fire alarm systems.”

Of course, there is more to Cannon & Wendt than just hospital projects. The company has completed several jobs recently, including the Arizona Cardinals Stadium, Phoenix Convention Center, and work at Arizona State University, Corning, General Tire and Wal-Mart. Anyone who has flown into the Sky Harbor airport at PHX has walked past the company’s handiwork. Its expertise runs deep and assists many different markets and facilities in reaching their highest potential.

HARLER, a frequent contributor to Security + Life Safety Systems, is based in Strongsville, Ohio. He can be reached at 440.238.4556 or [email protected].

Curt Harler, a frequent contributor to SECURITY + LIFE SAFETY SYSTEMS, is based in Strongsville, Ohio. He also can be reached at 440.238.4556.