Healthcare Gets the Green Light 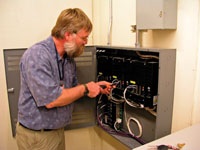 Ranked as the second most integrated healthcare system in the nation, Providence Health System in Oregon offers a comprehensive array of health and educational services through its seven hospitals, medical clinics, health plans, long-term care facilities and home health service.

In 2004, the need for a new hospital to serve the population in Newberg, Ore., became apparent, and Providence decided to replace its existing facility with a 350,000-square-foot, $70 million, combined, full-service hospital, medical center and medical office building on 56 acres that would attain credentials as the first Leadership in Energy and Environmental Design (LEED) designation for a West Coast hospital.

Oregon Electric Group (OEG), Portland, Ore., has worked with Providence Health Systems for more than 30 years, and its team-oriented relationship is what put the company on the list of prequalified bidders for the $5.9 million electrical and specialty low-voltage systems portion of the project.

“We’d heard about the project through various contacts at Providence and began budgeting the project 18 months prior to construction,” said Milt Plews, vice president. The design team, which consisted of Providence Health Systems; its general contractor, Skanska USA, Parsippany, N.J.; the engineer, Glumac, headquartered in Sacramento, Calif.; and Mahlum Architects, Portland, interviewed OEG to confirm its knowledge, experience and qualifications and then awarded the company the contract.

“Oregon Electric offered the project the best value and the best experience,” said Kirk Davis, Glumac’s managing principal. OEG and Glumac have had a decade-long relationship and worked together on about 30 projects in the healthcare and commercial markets. In addition, OEG has worked with both Skanska USA and Mahlum Architects on numerous high-tech projects in the healthcare market over the years.

Oregon Electric began work on the “green” Providence Newberg Medical Center in July 2004 and, with an average of 15 electricians and a peak of 44, completed the installation of the power distribution, backup power, lighting and controls, fire alarm, security and nurse call systems by June 2006. Although not a design/build or design/assist project, OEG relied on its knowledge of Providence Health System’s electrical standards to make cost-effective suggestions during the design phases.

“For the most part, we worked completely with the products specified by the design team,” said Scott Mears, project manager. “However, we value-engineered the light fixtures to ensure the hospital received a number of cost reductions while fulfilling their requirements and those of LEED certification.”

To complete the normal power distribution systems, electrical was brought in from the utility transformer to a 3,000-amp service and then to six sub-distribution boards, which sent power to approximately 40 branch panels throughout the hospital. From there, OEG ran wiring receptacles, lights, mechanicals and hospital equipment.

When it comes to having uninterruptible, secure power, hospitals have strict requirements to ensure the safety of the patients. At Providence Newberg, two 750 kW diesel generators were installed with two parallel feeds running into a 1,600-amp emergency switchboard.

“From there, power was fed through five automatic transfer switches to five emergency distribution boards and then routed to various mechanical equipment, as well as to approximately 40 emergency branch panelboards,” said Paul Pribula, general foreman.

Energy-efficient lighting for the hospital, which is one of the best and easiest ways to reduce a facility’s energy consumption to attain LEED certification, consisted of more than 3,000 fixtures, ranging from emergency lighting, such as exit signs and egress lighting, to linear fluorescent and incandescent recessed lighting, specialized surgical lighting, and high-intensity discharge (HID) fixtures in the parking lot. Lighting controls also are a major factor in reducing energy consumption and included occupancy and motion sensors as well as six programmable relay panels.

“Wiring was run from circuit breakers to the relay panels and then out to the light fixtures,” Mears said. The lighting control system also included individual dimming controls in offices, patient rooms and public spaces.

“The only areas that aren’t part of the lighting control system are the imaging and operating rooms,” Mears said.

Designed by Glumac, the fire alarm system for the hospital included pull stations, smoke and heat detectors, duct detectors, strobes, horn strobes, tamper and flow switches for the sprinkler system and various annunciator branch panels located throughout the facility. Devices were terminated at the main fire alarm panel in the electrical room. The fire alarm system was integrated with the air handling system through an interface relay module.

“This allows the fire alarm and air handling systems to communicate with each other to ensure that the sequence of operations for any specific event operates independently in each zone of the hospital,” Mears said. The fire alarm system also was integrated with the security system’s card access readers to ensure doors would unlock and permit evacuation in case of a life safety emergency.

The nurse call, access control and overhead paging systems were installed by OEG’s low-voltage division, Integrated Systems Group (ISG). The nurse call system is a two-way communication tool that allows nurses to easily speak with their patients as well as provide patients with some control over their rooms’ environment. In addition, it is integrated into the fire alarm system, so when a detector is activated in a patient’s room, the fire alarm system annunciates the alarm. The nurse call system then picks it up and notifies the staff.

For access control at entry points or secured areas, such as the labor and delivery rooms, ISG installed card access readers that require an entry code or magnetic stripe card to operate. Monitoring of the system is performed both on-site and at a central security location staffed by security personnel.

“For the access control system, one of the biggest challenges of the project was coordinating our efforts with the providers and installers of the electric door locking hardware,” McCarty said. ISG continually coordinated its procurement efforts with the owner, general and door contractor to keep information flowing and ensure the correct connections between door and access card readers were purchased and installed.

Installation of the nurse call system required coordination with the nurse managers and their staff members to ensure the system’s programming would maintain the same standard of operation used at other Providence facilities. It also needed to give on-site staff the options they wanted for each of their respective areas of responsibility, such as different call tones or color and flash rates of alarm lights.

“To ensure as much standardization as possible, we performed a needs analysis with the customer prior to the installation to help minimize any potential confusion about the options available,” McCarty said.

To ensure the most state-of-the-art technology is available, hospitals tend to wait to choose major pieces of equipment, which can have a ripple effect throughout the whole project. OEG, through its expertise, teamwork and knowledge of Providence Health System’s long-term mission and requirements, continually met with the design and construction team, which worked together to ensure the client’s needs were given priority over any single team member’s goals, and the project remained on track.

“OEG’s preconstruction and planning expertise, along with their willingness to collaborate with the entire team, enabled us to resolve design issues before they became construction issues and complete the project on time,” Davis said.     ¶