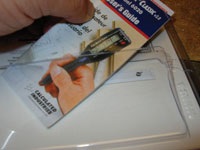 Retail theft across the United States results in a loss of $13 million in revenue each year. That amounts to $35,000 lost every day.

According to the National Association of Shoplifting Prevention, Jericho, N.Y., one in 11 people in the United States have shoplifted over the last 12 months. This translates to more than 27 million individuals.

When someone in the retail industry speaks of “shrinkage,” he is referring to the theft of the products he sells. There are three primary causes of shrink with which retail stores have to contend: shoplifting, employee theft and poor accounting practices.

There are several ways retailers approach the task of preventing the loss of product. One way is to install video surveillance cameras with a means of recording images. A second method is to tag products so an alarm sounds when someone attempts to remove the items from the store.

The latter is referred to as electronic article surveillance (EAS) by the security industry. The methodology used in EAS hinges on the de-tection of products as the perpetrator attempts to remove them from a common public entrance.

A typical EAS system consists of a set of pedestals on either side of a public exit point and any number and styles of tags that fasten to the product. EAS tags can take many technological forms. Some are based on a passive technology in which pedestals power the tags. Others are active and powered by a separate battery.

Shoplifting reduction is one of the most important objectives of any retail store’s security program. EAS systems are designed to effec-tively meet this objective by detecting the minute radio frequency (RF) field surrounding an attached radio frequency identification (RFI) tag.

EAS technology creates an electromagnetic or RF field in the vicinity of an exit portal. When an active tag comes in contact with this RF field, it responds by generating a similar RF or magnetic field. An antenna assembly contained within one or both EAS pedestals posi-tioned on one or both sides of a portal recieves this field.

Tags manufactured for this task usually can be activated and deactivated at will, using a contact. An electromagnetic unit, frequently built into the counter near the cash register, usually is used to deactivate the tags on or in each purchased item.

Tags are commonly applied by the retailer or embedded within the item or the packaging material at the point of manufacture (POM). It often is more cost effective to have them installed at the POM.

Fractional tagging is another method employed by manufacturers to abate shoplifting. Fractional tagging means only a given per-centage of goods in a specific retail store are tagged. Using this system disuades potential thiefs using the element of fear. The average crook won’t know which items are tagged—until the EAS system goes into alarm.

Of course, crooks can look for the customary EAS pedestals positioned on either side of each entrance, which tells them that an EAS system is employed at a particular store. Smart crooks will assume every item in the store is protected, but there will always be those who believe they can beat the odds. This is why nearly 63 percent of the 27 million who shoplift each year are caught in the act of shoplifting.

There are four types of EAS systems on the market. They use the microwave, magnetostrictive (acousto-magnetic), magneto-harmonic (magnetic) and several kinds of RF technology.

The magnetostrictive method uses a tag composed of a strip of amorphous metal applied to a ferromagnetic material. The EAS portals emit a pulsing RF signal of 58 kHz or 66 kHz, causing a tag to be energized. The introduction of a 58- to 66-kHz signal causes the tag to emit its own RF field, which a receiver inside the portals picks up.

The receiver checks several factors simply to ensure the authenticity of the returning signal. The magneto-harmonic, or magnetic, method uses a similar method of tag activation and detection, but using a frequency of 10 to 1,000 Hz.

The microwave technique employs two RF signals—one high and one low. Using a frequency-hopping method, this type of EAS system transmits on 50 frequencies between 902 and 906 MHz

A low 111.5 kHz frequency limits the propagation of the higher frequency while modulating the tag’s signal. This enables the EAS system to identify the RF signal coming from a particular tag as being authentic.

Tags can typically be activated and deactivated using an electromagnetic tool usually built into the counter at the point of sale. Demagneti-zation of some tags actually activates them for use, while magnetization deactivates them.

COLOMBO is a 32-year veteran in the security and life-safety markets. He is currently director with FireNetOnline.com and a nationally recognized trade journalist located in East Canton, Ohio.

Allan Colombo is a 35-year veteran in the security and life safety markets. He is director with FireNetOnline.com and a nationally recognized trade journalist in East Canton, Ohio. Reach him at [email protected]