Getting Power On and Keeping It On 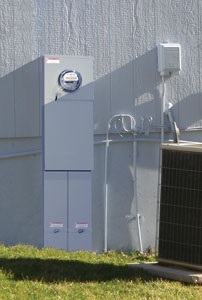 Temporary utility service is not typically a segment of the industry many people point to regarding new and exciting advancements.

With few exceptions, electrical contractors assume the responsibility for the temporary power application process according to local utility provider guidelines for overhead and underground temporary service. The utility will make approximately two to four trips to the project from the time temporary power is requested to the moment permanent power is supplied to the property. Trimming costs from the process has not been very feasible, and aside from the rise in underground service installations, there haven’t been any major technological or installation advancements in single-phase, three-wire, 120/240-volt, 200-amp service in several years.

“If there is a way to simplify hooking up a temporary service, especially in an area where all the lines are underground, it helps out everybody,” said Nathan Mitchell, director of engineering and operation services for the American Public Power Association.

There is a new method in a growing number of towns. A recent pedestal development for underground installations is making it possible for contractors to satisfy requirements for both temporary and permanent service in one installation. Milbank Manufacturing Co., based in Kansas City, Mo., recently introduced the temp-to-final-service pedestal for ringless (U5706) and ring type (U5707) meter sockets.

Designed for 200-amp, 120/240-volt, 22K AIC underground service, the concept is being incorporated in the temporary service specifications of some key Midwestern utilities, residential developers, electrical contractors and inspectors. Early adopters of the meter-socket pedestal include Jo-Carroll Energy in Elizabeth, Ill., Wisconsin-based Alliant Energy and Mid-American Energy in the Quad Cities of Iowa and Illinois. A Mid-American branch operation in Des Moines, Iowa, currently is testing the pedestal concept with selected local home builders.

According to Larry Ward, Milbank’s national accounts manager, utilities wanting to reduce the number of trips to the job site drove the concept, thereby decreasing manpower and expense.

“Typically, the utility has to send out a technician to make sure there’s a proper installation before they install a permanent meter. That sounds like two trips, but it could be three to four depending on what is found upon an inspection, the meter type used and whether it needs to be recalibrated. When trips were cut in half, the utilities realized a significant savings,” Ward said.

Rob Weber, Alliant Energy’s lead standards engineer, pointed out that this newly adopted device satisfies service requirements for permanent service when temporary use is no longer required, and it eliminates the extra trip and subsequent cost to energize the permanent service.

Once a foundation is poured, the temporary-to-final enclosure can be set in place, and framing and construction can be completed around it. The direct bury pedestal, constructed from powder-coated galvanized steel, can be free-standing or structure mounted. It provides a meter socket, an upper cabinet for a main 200-amp circuit breaker and up to four branch breakers, as well as a split lower cabinet to house utility connections on the left side compartment and a contractor’s underground load exit in the right. The pedestal also has provisions for up to two Type 3R in-use receptacle kits.

In the areas where the pedestal is being incorporated, Milbank Manufacturing reports that the benefits have, in most cases, outweighed the drawbacks. In addition to reducing the utility trips to the site, contractors save the cost of maintaining, job site setup and tear down of the temporary power system, and the utility fee associated with setting the temporary meter, which ranges depending on the size of the market.

Setting a fully serviced pedestal the first time also eliminates the lag time that commonly exists between the completion of a house and the subsequent closing and establishment of permanent power that can freeze up funds for all interested parties. There’s a side benefit for the homeowner who gains additional exterior receptacles and extra circuits to expand outdoor amenities.

Milbank’s Ward said one of the biggest challenges to the acceptance of this alternative technology has been the willingness of the trades to adapt and change to a different method. For instance, some contractors are reluctant to install an underground service when landscape grading is not fully determined. Some inspectors have expressed a concern that since the temporary--to-final option is permanently metered, they have to modify their process for approving final service activation.

“Despite some of those reservations, we continue to see field versions of the pedestal technology on job sites around the country, which confirms for us that it is a viable solution several utilities and contractors seek,” Ward said.

A collaborative effort by Schneider Electric and Kohler Power Systems is resulting in a new automated load shedding technology that can be installed during new home construction to supply backup power during an outage.

The Square D intelligent load center, originally introduced in 2005, has been enhanced to allow nonessential loads to be turned off during a power outage. Unlike conventional generator setups, the load shedding advancement avoids overloading a generator while delivering appropriate levels of power to a home’s high-demand functions.

One of the key drivers behind the development is National Electrical Code (NEC) 702.5(2), which was added for 2008. Revised language now requires the generator to be sized properly to a load center or provide a mechanism to limit the load.

According to Bill Unseld, Square D/Schneider Electric’s manager of product marketing, the intelligent load center monitors utility power for any power interruption. If a power failure occurs, the generator is signaled to start, and power is restored within 10 seconds. When utility power returns, the switch transfers the electrical load back to the utility and shuts down the generator.

“A small DC motor built into the circuit breaker opens the contacts and keeps them open until the breaker signals close again,” Unseld said.

Some key essentials that most families would want to keep energized with a properly sized generator include a refrigerator, selected lights, HVAC components, a microwave and a garage door. Unseld added that a small 12,000-amp pad-mounted generator fueled by natural gas or liquid propane typically would be adequate for the essential needs of an average 2,500-square-foot home.

“The intelligent load center is an astute choice for new home constructions because an electrical contractor doesn’t have to install a subpanel for a generator,” Unseld said. “They can take the standard circuit breakers out and reconfigure the whole system with intelligent circuit breakers if a homeowner adds square footage.”

In a prewired application, the intelligent load center, recently employed in display homes at the International Builder’s Show in Orlando, would serve as a home’s main panel capable of providing 42 circuits. From a size standpoint, the panel is slightly larger than a traditional circuit panel in order to accommodate a service-entrance rated transfer switch. Installed at the time of construction, company representatives estimate that contractors and homebuilders will typically realize an estimated $800 to $1,200 savings in product and labor costs compared to a conventional electrical upgrade.

According to Schneider Electric’s Eric Rall, the general perception of the need for typical generator usage is obvious during extreme weather events, such as hurricanes and snow and ice storms. However, he points out that most people are already at home when such events occur; therefore, they can manually switch from grid power to generated power.

“The time you need automated transfer is when you’re not at home or when you need to protect work-at-home investments in a home office,” Rall said. “Right now, second-home ownership is at its highest levels due to the large baby boomer demographic. A lot of these properties tend to be at the end of the power line infrastructure in mountain homes and beach houses, and they’re among the last customers to have grid power restored.”

Future schemes of the intelligent load center will switch circuits off based on the actual load, not the theoretical load. Future generations will have more logic and sense the loading, so an air conditioner may run 30 minutes out of every hour and alternate with the freezer in the garage.

Designed as a modular panel, the homeowner can defer the purchase of a generator until a later date. An intelligent load center installed in the home will provide an opportunity for a contractor to gain extra business through that upgrade due to a more seamless installation process when the homeowner is ready. Company officials also report that the addition of automated load shedding allows contractors to provide customers more cost options regarding the purchase of generators.

“Some builders in coastal areas are differentiating their homes as being backup-power ready,” Rall said. “For electrical contractors, here’s an opportunity to put in a prewired package that operates as a standard load center with provisions for an automated switching feature that they can upsell later on.”