A Future in the Sun 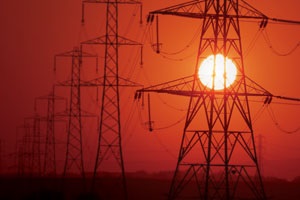 Those who have followed the solar photovoltaics (PV) industry for the last 15 years or more can be excused for feeling a tad skeptical about current claims that now the industry is on the verge of taking off. However, with large utility incentives on the horizon and new financing mechanisms cutting owners’ initial outlays, it seems solar PV power may finally be ready for prime time.

More than 300 MW of new solar capacity was installed in 2007, up 125 percent over 2006 figures, according to the Washington, D.C.-based Solar Energy Industries Association. And PV panels aren’t showing up only on rooftops—a 14-MW utility-scale PV array went live last June at the Nellis Air Force Base in Nevada.

“We’ve turned a corner,” said Julie Blunden, vice president of public policy and corporate communications for San Jose, Calif.-based SunPower, a leading manufacturer of PV equipment for residential, commercial and utility-scale installations. “As of the end of this year, we’ll have 10 GW of installed capacity around the world, and we’ll be adding 5 to 10 GW more a year, as of 2010.”

Of course, it seems natural that a California company would be bullish on solar power, given that state’s abundant sunshine. Today, however, PV panels are becoming common even in comparatively gloomy areas. Germany, with solar intensity similar to that of Alaska, is the world’s leading solar-energy adopter. And in the Northeast U.S., New Jersey has become a leader in solar power.

“We’re not blessed with solar intensity,” said Al Matos, vice president of renewables and energy solutions for PSE&G, the state’s largest electric utility. “I would say, though, that New Jersey is blessed with a lot of flat roofs—we have a high concentration of warehouses and data centers. Those rooftops will become precious real estate.”

A combination of increasingly efficient technology, rising energy prices and government incentives—along with the renewable-energy requirements utilities in many states are facing—is responsible for solar power’s current growth. Also aiding commercial users is an increasingly popular financing option, called a power purchase agreement (PPA), which can result in locked-in electricity rates for buyers, with no upfront costs.

SunPower has adopted PPAs as a major marketing tool, and Blunden said most of the company’s commercial customers are taking advantage of the plans. Under these arrangements, the solar equipment actually is purchased by a third-party financial entity, which then installs the equipment at the customer’s site. The customer then contracts with the financial entity for an established number of kilowatt-hours of electricity at a set price. This price may rise over the contract’s life as a result of inflation clauses, but any rate hikes will be predictable and known in advance—a big advantage to corporate financial planners.

“What customers do not like is the idea of getting unpredictable rate increases,” Blunden said.

This financial-planning advantage, along with the obvious environmental benefits is drawing new interest in solar opportunities from corporate customers, especially among multioutlet retailers, such as department stores and big-box outlets. Blunden said SunPower now is working on installations for 28 Macy’s department stores and 22 Wal-Marts in California and Hawaii.

On the opposite coast, PSE&G is proposing its own financing plan for businesses and residences within its service area. A two-year, $100 million pilot version of the plan, proposed in April 2007, was anticipated to be approved by New Jersey regulators just as this story was going to print.

Under the program, PSE&G will provide 40 to 60 percent of an installation’s cost as a loan to the developer or building owner. The owner will receive the benefit of low-cost solar electricity, and the utility will be paid back through the renewable energy credits each installation will generate. These credits have value to the utility because of New Jersey’s renewable portfolio standard, which requires utilities to purchase a percentage of the electricity they sell from renewable sources. The credits also have value on the open market, both to other utilities and to corporations seeking a greener image.

“The response we’ve gotten has been very exciting,” Matos said. “These types of systems were never affordable to small businesses and residential customers.”

As the PSE&G effort illustrates, electric utilities now are backing distributed PV installations at a level that seemed difficult to imagine five or 10 years ago. Early solar-power adopters often faced hurdles in connecting their home- or business-based systems to the larger grid. Utilities feared faulty interconnections could place repairmen at risk. And they also argued net-metering arrangements—in which electricity generated in excess of the facility’s needs is sold back to the utility—could raise power-quality problems for other connected customers.

Today, however, utilities are more focused on developing new energy resources that limit their exposure to skyrocketing fossil-fuel prices and on meeting state-imposed renewable portfolio standards. In fact, Edison Electric Institute (EEI)—the Washington, D.C.-based association of investor-owned utilities—has made an extension of the investment tax credit that benefits renewable-energy developers one of its lead legislative priorities, according to Monique Hanis, communications director of the Solar Energy Industries Association.

“The reality is the power industry is changing very quickly,” Blunden said. “We have a very different concept of what energy security means today.”

With this change comes a great opportunity for electrical contractors looking for new ways to expand their businesses. As photovoltaic-panel installation moves from its informal roots to by-the-book respectability, third-party financial backers want assurances that equipment will be as productive as promised. PSE&G, for example, is requiring participants in its plan to purchase an extended warranty. Licensed electrical contractors are logical providers of professional installation services.

“Electrical contractors won’t have that much to learn,” Bluden said, noting that siting issues and panel interconnections probably will be the areas where contractors’ learning curves will be highest. “The electrical stuff is very straightforward.”

In Southern California, the Los Angeles County National Electrical Contractors Association (NECA) chapter has joined with the International Brotherhood of Electrical Worker’s (IBEW) Local 11 to encourage area contractors to explore the PV market and to direct consumers to qualified installers. By the end of April 2008, 1,800 electrical contractors were anticipated to have gone through an 18-hour training course the two organizations have created. Graduates of this program are hoping to break into California’s exploding solar market—more than 500 MW of solar-generating capacity is expected to come online in 2008, according to Kim Craft, Local 11’s assistant business manager and a co-developer of Your Solar Solution, with Thomas Martinez, business development director of the L.A. County NECA chapter.

The intensive two-day course, which now is traveling across the entire state, provides students with 10 hands-on stations and exposes them to all system components. Four hours of class time also is included, covering an electrical-Code review and other important topics. Craft said the training program was designed with two goals in mind.

“The first was to give our members confidence that there’s nothing here we haven’t already seen,” he said. “The second was to build confidence in the contractors that their work force was competent.”

The two organizations have created a separate four-hour course for contractors’ salesmen and estimators to address sales and marketing issues related to quoting photovoltaic installations. This session covers how to plan out a system and how to understand the sometimes-complicated network of rebates and tax credits that can be critical to financing installations. Additionally, www.YourSolarSolution.com helps consumers find licensed contractors for their own photovoltaic projects.

For consumers in other areas of the United States, the North American Board of Certified Energy Professionals (NABCEP) has established a certification program for installers. NABCEP installer certification has become a common requirement of many rebate and incentive programs. The group has seen the number of applications for its exams grow rapidly—the number of applicants for its March 15 examination was up 55 percent, versus the figure for the same test in September, according to operations manager Karen Christopher.

“Once a state starts offering solar rebates, that’s when that state sees growth,” Christopher said. “The consumers start asking for the systems and the states say, ‘You have to use a certified installer.’ And that’s when we start getting phone calls.”

Applicants for the exam can come from any of seven specified career paths, including licensed electrical contractors. However, all applicants must have at least a year of hands-on experience installing PV equipment.

As energy prices continue to climb and PV adoption grows, industry participants believe market conditions soon will reach a point where government support is no longer necessary. In California, for example, commercial PV installations already are two years ahead of targets established in a state-sponsored 10-year plan, and residential installations are meeting the milestones set for that market sector.

“This program gets us to the point where we don’t need incentives to bring us into parity with utility electricity rates,” Blunden said.

Utility price parity has been the Holy Grail of PV promoters since the 1970s energy crisis first got renewable-energy fans singing “Here Comes the Sun.” Once consumers can begin seeing a return on their investment in the five- to 10-year range, PV panels could become a standard feature on rooftops throughout the country.

“The pace at which solar can be deployed over the next few years may actually exceed what we’ve seen over the last few years,” Blunden said. “PV is going to be on the map in a big way in a very short period of time.”