Flywheels Take Solar and Wind for a Spin 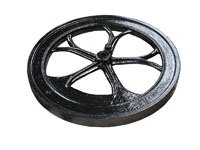 As the smart grid grows, so do solar and wind power, the two stalwarts of the renewable-power transformation. But one of the biggest strikes against the two has been the intermittent nature of the electricity they generate. In other words, they can only produce electricity when natural conditions allow it, and this does not always correspond to the times of greatest demand.

On the other hand, the smart grid thrives on efficiencies of generation and transmission. No bottlenecks, spikes or dips. How do we reconcile the two?

The answer reveals why energy storage is so important to the marriage of renewable power and the smart grid. But here, too, many traditional storage solutions come up short. At the very least, they don’t meet the new, low-carbon-emissions litmus test.

The concept of flywheels is not new, but their importance to the new equation of renewable power and the efficient, reliable transmission of electricity is growing. By allowing electrical energy to be stored as rotational energy in the form of a large metallic wheel spinning at super high speeds, they offer a solution to the nagging problem of renewables and their intermittency.

With this evolving synergy in mind, the U.S. Department of Energy’s (DOE) Advanced Research Projects Agency—Energy (ARPA-E) recently signed a contract with the Tyngsboro, Mass.-based Beacon Power for the development of a new “flying ring” flywheel energy-storage system over a two-year period. The company is a provider of frequency regulation systems that employ flywheels to store energy.

The goal of the $2.8 million contract is to develop a flywheel system that will store four times the energy at one-eighth the cost per kilowatt-hour compared to the company’s current Smart Energy 25 flywheel system.

The nexus to renewable power is clear to both parties involved. According to the DOE, one new application of the project is so-called “ramping” support for wind and solar power. The goal is to provide one hour of flywheel storage as an energy balancing resource, displacing an equal amount of fossil fuel-backup power that would otherwise need to be generated.