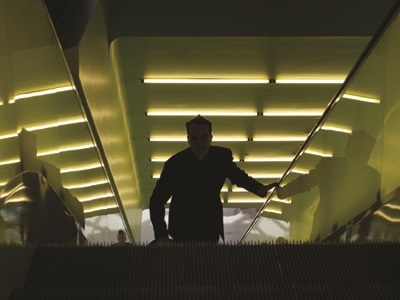 THOUGH FLUORESCENT LIGHTING SYSTEMS have been on the market for years, manufacturers continue to introduce evolutionary improvements that increase functionality and produce economic savings. That positions fluorescents among viable alternatives, especially in commercial installations.

But they aren’t foolproof. So, today’s question is: How do you react when a client calls and says that many of the fixtures in his newest building aren’t working properly?

One choice: Contact Conan O’Rourke, a technical director at Rensselaer Polytechnic Institute’s Lighting and Research Center (LRC) and director of the LRC’s National Lighting Product Information Program (NLPIP). His task: the oversight of the LRC’s work in testing and evaluation of energy-efficient lighting products and technologies.

Since only about 1 percent of the fluorescent ballast systems have dimming capability, O’Rourke, et al. are always looking for guinea pigs. As a result, they were quick to answer the bell when a big box retailer’s fluorescent systems showed signs of failing, and were asked to investigate.

The lighting system had been operating for only two years and featured skylights and 1,350 luminaires with dimming ballasts, four lamps in each. The dimming ballasts had a range of 5 to 100 percent light output. On-site, O’Rourke’s team discovered that 10 percent of the luminaires in the store contained lamps that had failed. However, the failures appeared to be randomly distributed throughout the store, and problems included shortened lamp life, non-working lamps, lamps with severe end-darkening, and low light output.

“Whatever the cause, improper installations result in a lack of electrode heating, reducing lamp life,” O’Rourke said. “While the lamps themselves are inexpensive, labor costs to replace them can be significant, turning your energy-saving alternative into a costly one. Take extra care in the installation process with both the luminaires and the lamps. And recognize that adding dimming to a project can increase the complications.”

On a more positive note

These days the phrase “new and improved” even applies to fluorescents, where improved troffers that increase brightness and comfort in the workplace, and improved backup systems, are emerging.

Historically, the office environment has been a primary market for fluorescents, because their characteristics include long life and low energy usage. That color temperatures were often out of whack was of little consequence, a shortcoming offset by the use of parabolics, which direct light into a cut-off zone, while restricting light in a shielded or glare zone. The result is well-lit work areas and high-angle brightness suppression. The flip side of the equation is that they also create poorly lit areas away from the luminaire.

To eliminate the dark spots and sharp cutoffs created by parabolics, engineers at Cooper Lighting designed the Accord product to increase the angles at which light is delivered without increasing glare. The result: Softer light, which is easier on the eyes in schools, hospitals, retail spaces and offices.

“From an aesthetic standpoint, Accord provides the right amount of light and eliminates surface shadows commonly found in parabolics,” said Mark Lien at Cooper Lighting. “The major attributes of the Accord’s new-generation, high-efficiency fluorescent troppers are improved aesthetics, comfort, energy savings and efficiency.”

In his view, buyers are willing to pay higher prices up front for products that will improve the environment and reduce costs.

“What’s occurring in the marketplace is a paradigm shift from a world in which product development was driven by pricing, to one in which energy legislation is driving new technology. Now, optics, state-of-the-art light sources, ballasts and reflector material are keys,” Lien said. “Accord is an extremely efficient luminaire. Where parabolics were required to produce a minimum of 50 foot-candles, Accord does the job with 40.”

The bottom line: energy consumption may be reduced as much as 30 percent, when compared to an 18 cell, three-lamp, T8 parabolic. So, in a world in which environmental and legal considerations are factors, improvements translate to fixtures and lamps that satisfy the mandates of energy czars, and the penny-pinching personalities of bean counters.

In a perfect world, sources of electricity would be constant and predictable. However, we have all experienced the dip in current that occurs when the universe is peppered with sun spots, or a gremlin takes up residence at an electrical plant.

Or, as Peter Shackle, vice president of advanced technology, Fulham Co., Hawthorne, Calif., offered as an example: “When a backhoe operator cuts a line and the job shuts down until full power is restored.”

That is where Fulham’s new Racehorse models enter the picture with additions to a family of high-performance linear and compact products. (Shackle said he is unable to explain the company’s use of the moniker “Racehorse,” but adds that the product line includes “Workhorse” fixtures and “Pony” transformers.)

“Racehorse’s universal input voltage ranges from 108 volts to 305 volts, so [it] will produce dim light and operate without damage during a power dip down to 60 volts. Those are the types of dips that tend to occur on job sites,” he said.

The product also has received approval from Underwriters Laboratories Inc. (UL), allowing the same ballast to be used with multiple lamps from 59-watt triples to 26-watt quads. Plus, the horse automatically shuts down when a lamp reaches the end of its life, reducing the possibility of power demand increasing to fire a dead ballast. That feature also reduces the risk of a short or the lamp shattering. When replaced, new ballasts automatically restart, regardless of the sequence in which lamps are energized, a feature not present in all products. In one interesting application, the product was placed in use in a diamond mine five miles below the earth’s surface.

To prevent the risk of fire occasioned by a ballast being too closely surrounded by insulation, ballasts are set to drive the maximum load, but will shut down automatically in the event of overheating.

Plus, he said, “when an electrician’s pride and manhood require him to work with power on, the product will withstand a short circuit if the output wires are grounded or touch each other.”

Fulham’s Racehorse also meets Class B emi performance standards (which translates to no white dots on a television screen), so is certified for use in consumer applications. Plus, the company has selected an operating frequency that avoids interference with IR television remote controls.

While Fulham’s products may reduce the inconvenience occasioned by power shortages, dealing with a total power loss is a different situation. Enter John Levesque, national sales manager for the Bodine Co., Collierville, Tenn., which engineers backup systems for use when the primary source of electricity is interrupted. Bodine deals with challenges presented when adequate lighting is a critical component of an evacuation, allowing the occupants of a hospital or hotel, for instance, to find the nearest path of egress.

To that end, the company recently introduced a compact, low-profile fluorescent battery backup dubbed the LP600STU, (not nearly as interesting a label as a racehorse). The 22-inch-long, 1.18-inch-high unit is designed for use with T5, T5HO and T8 lamps. Of its primary attributes, Levesque said, “It is a self-testing unit that is wired to a wall switch for charging. It features a preprogrammed, self-testing capability that allows for 30-second, and 90-minute testing [as required by life safety codes].It has self-detecting, fault-discovery capability that produces both a flashing light and warning buzzer to signal a failure.”

The LP600STU also accepts universal input from 120 to 277 volts and end-of-life circuitry. “The patented end-of-lamp-life circuitry is compatible with most types of AC ballasts,” he said.

A word of caution

Stan Walerczyk, LC, a principal of Lighting Wizards and former member of IESNA’s Energy Management Committee and Retrofit/Upgrade Subcommittee, adds these words of wisdom to the contractor or building owner considering recommending that clients switch to the newer types of fluorescent lamps and fixtures.

And, he said, “Whatever you do, please help stamp out standard MH, standard HPS and basic-grade domes.”

Not that he has an opinion, mind you. EC

LAWRENCE is a freelance writer and photographer based in Bozeman, Mont. He can be reached at [email protected].

Ed Lawrence is a freelance writer and photographer based in Bozeman, Mont. He can be reached at [email protected].