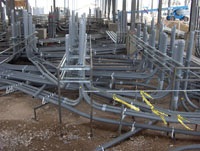 There's no turning back progress. Today’s subcontractors play an increasingly important role in building design and construction. Design/build is one such growing example. The Design-Build Institute of America in Washington, D.C., estimates design/build will overtake traditional design/bid/build in five years, accounting for 50 percent of all nonresidential projects, and will continue to grow. Use of building information modeling (BIM) is expected to grow, as well, and become a central construction component.

While the building industry’s acceptance of BIM is growing, at what pace is its growth? McGraw-Hill’s December 2008 “SmartMarket Report on Building Information Modeling: Transforming Design and Construction to Achieve Greater Industry Productivity” offers some insight. The report shares that, “62 percent of users surveyed indicated that they will be using BIM on over 30 percent of their projects in 2009.” Further, “82 percent of BIM experts believe that BIM is having a very positive impact on their company’s productivity and 44 percent of BIM experts now regularly track BIM [return on investment].” The report concludes that, while BIM is still in its “wonder years,” it will change the building industry as players discover multiple benefits to collaborative virtual design, be it in design/build or other partnerships.

The report was produced from interviews of hundreds of BIM users, ranging from owners, general contractors and architects, to civil, structural and mechanical-electrical-plumbing (MEP) engineers and trade contractors. Though electrical contractors have been slow to adopt BIM, they are exploring where it fits into their business.

“Like politics, all BIM is local,” he said. “On the West Coast, it’s a requirement for up to 85 percent of all projects. BIM adoption on the East Coast is accelerating. Midwest and Southern states are just beginning. The economy for all practical purposes hasn’t created a pull back to more traditional design methods. In fact, it’s just the opposite as firms embrace BIM for better project delivery and lower risk. Even the U.S. Army Corps of Engineers is requiring BIM for many of its civil works and military construction projects.”

“In design/build, ECs and other subs work to accomplish the intent of the project,” Morris said. “That team aspect is only heightened when you use BIM. We find design/build is best suited for the EC when 80 percent of the work is electrical, such as substations, data centers and the like. Sometimes we are the primary if the project is power generation. The EC is a natural lead in such projects, though it also depends on the relationship with the owners. Other electrical/mechanical weighted projects have also allowed us to take the lead. For example, we have served as the primary contractor for wastewater treatment projects. BIM benefited the construction process in every aspect.”

EMCOR’s use of BIM extends to design/assist and integrated whole-building design projects, as well.

For Rosendin Electric Inc., San Jose, Calif., 30 percent of its commercial and industrial projects are design/build. Bill Mazzetti, the firm’s vice president of engineering and chief engineer, adds that 100 percent of Rosendin’s projects employ the BIM process to some degree.

“We use ‘virtual building’ on every commercial project that is ongoing, including hospitals, data centers, bio-pharmaceuticals, stadiums, high-rise residential or hospitality,” he said. “We’ll push for BIM to be incorporated in a project, but realize we need the owner or general to commit. Even if BIM isn’t being used on a project, we utilize its features to 3-D model a room for electric components or to conduct a quantitative analysis of our work.”

Jason Medaris, vice president of Schetter Electric Inc., Sacramento, Calif., said his company’s design/build projects are also “across the board” ranging from healthcare to public works. Since 1995, BIM has played a role in his company and has been what he described as a “natural evolution.”

“We’ve used dimensional software for years beginning with AutoCAD, then Navisworks and now BIM,” Medaris said. “In design/build and other approaches, BIM helps the team avoid problems in the field because all the work is created and confirmed in the virtual model. The projects move faster and saves everyone money. We see BIM buy-in and the push for its use coming from construction managers who see its value. The more sophisticated construction groups push the hardest.”

The McGraw-Hill study found architects drove BIM usage (40 percent) followed by construction managers or GCs at 18 percent. A combination of both represented 14 percent, followed closely by owners at 13 percent. MEP engineers and trade contractors stood at 3 and 1 percent, respectively.

Getting over the BIM hurdle

All three contractors shared how their firms embrace new technology and prefer working collaboratively with their construction partners in design/build or a related fashion. They also recognized embracing new ways to interact within the construction industry is challenging, which may help explain the slower-than-expected adoption of design/build and BIM together and independently.

“We did what other early adopters did with BIM,” Morris said. “We laced up our boots and started marching up the hill. Admittedly, some contractors dragged us up, though now we drag some of them. We struggled with BIM at first and needed to discover how it could best benefit us. We do some very complex electrical work. BIM’s precision, flexibility and visual nature really sold us.”

Morris cautioned that while BIM is a collaborative design process, it doesn’t guarantee all partners work together as they should, which hurts its success.

“This social aspect has a way to go in this regard, but it is improving rapidly,” Morris said.

“While BIM is very accurate, if one of your partners doesn’t fully embrace it and moves ahead without respecting the design, you can fail. Our general foreman was stymied on one project because several things were wrong when one of the subs didn’t pay attention to the plans as laid out in the BIM model. Change is hard,” Mazzetti said.

Other obstacles remain to developing what seems to be a natural pairing of design/build and BIM.

“I find when firms or individuals say ‘BIM isn’t ready,’ it’s an excuse,” Morris said. “It certainly isn’t inaccurate. We’ve been using [BIM] going on seven years. Those that get beyond the learning curve and get involved in BIM never design any other way, if possible. Today we feel it’s a fool’s errand not to use BIM, especially for bigger, complex projects. Our rework was been reduced as has the installation time of our work. We’re now looking at the prefabrication capabilities of BIM, not just the collaboration end of it. BIM is similar to learning how to play a musical instrument. First you focus on the mechanical and, as you get proficient, it opens itself to broader horizons. It’s a learning curve from mechanics to higher value.”

Mazzetti said it helps knowing what to expect in BIM.

“BIM will be unique to your company and integrating it will change the way you do things,” Mazzetti said. “It also requires lots of capital investment and effort. Gaining the expertise can be a six- to nine-month endeavor. Additionally, you may have to go outside and hire new talent. I can’t emphasize enough that BIM isn’t an out-of-the-box software. It’s process of learning, discovery and applying it to your benefit. Look at BIM as a toolbox where you grab what you need and want. The gains will reveal themselves rather quickly. For example, we truly appreciate how BIM can improve crew flow on the job site. It creates coordination amongst all parties and actually spells out a schedule when one job needs to [progress] before another.”

“The metric from our polling within our 76 companies shows hardware and software cost per company at $20,000 to $30,000,” Morris said. “The training and learning curve is another cost. We estimated total cost for a designer who evolves from pencil detailing to BIM proficiency at $100,000. We have over 200 such BIM workers coast to coast.”

Medaris also recognizes the start up and training costs of BIM can be daunting, but he doesn’t see it as a deal breaker.

“BIM is an expensive endeavor, but we feel strongly in embracing technology. It’s worth the investment. We don’t see it as a burden, but rather a growth opportunity,” Medaris said.

The benefits of collaboration

The design/build approach and BIM process is helping break down the silo mentality of those who see only their work.

“Now we look a project as a whole-building design and share the design responsibility,” Mazzetti said. “That’s a major shift.”

For Medaris, meeting schedules and deadlines have been the chief assets of BIM in design/build.

“When BIM is added to a project, you save time. Information is shared visually and with clarity for the entire construction team. I think we’ve adapted to it very quickly. It also brings our internal teams together.”

Mazzetti agreed and added, “D/B [design/build] places everyone who has a stake in the project’s success in the same bucket. D/B removes some of those traditional tensions. Working in BIM removes them further. BIM also promotes consensus with the builder. Basically, no man is an island. D/B and BIM are team sports. The return is great management and accountability in a construction project. Everyone succeeds if they truly participate.”

GAVIN is the owner of Gavo Communications, a marketing services firm serving the construction, landscaping and related design industries. He can be reached at [email protected].