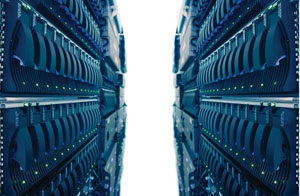 According to Technology Review, Microsoft Research’s Networked Embedded Computing group is working to make data centers more energy efficient in two ways. First, new algorithms make it possible to lighten the workload for servers and put them in sleep mode. Then sensors are used to identify which servers would be the best to shut down based on the environmental conditions in different parts of the server room.

Microsoft researchers say eliminating hot spots and minimizing the number of active servers could reduce data center energy consumption by 30 percent. The Web-enabled sensors monitor both heat and humidity and can be networked and used with Web services.

Microsoft’s Feng Zhao said he envisions the sensors, which still are just prototypes, as a new type of scientific instrument that could be used in a variety of projects. Meanwhile, the algorithms, which distribute the load to free up servers during off-peak times so they can go into sleep mode, are designed for connection servers, which are used with services users may log into for several hours. The long sessions require complex planning to avoid disconnecting users and other service problems.

The researchers have developed two algorithms, one that predicts how many servers will be needed hours ahead of time and one that distributes traffic according to those predictions and shuts down relatively empty servers.